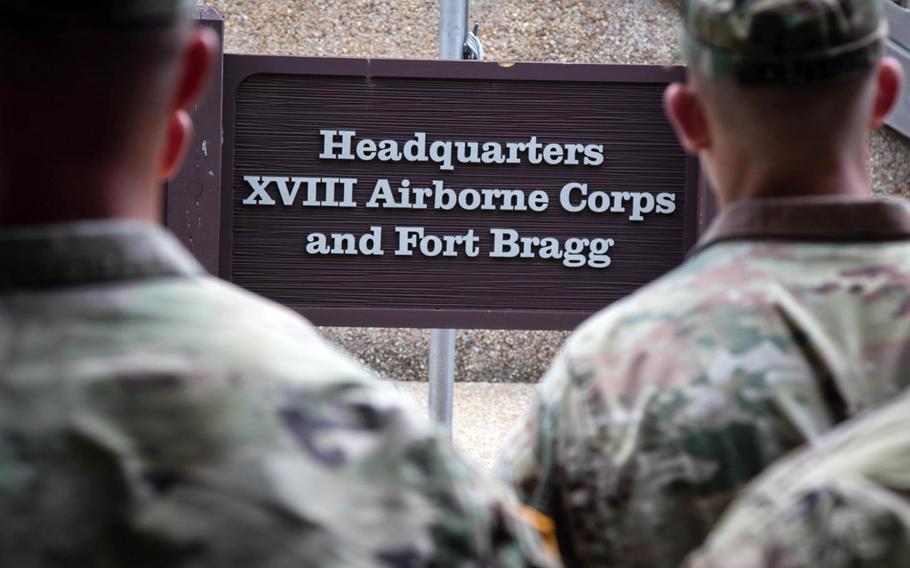 Soldiers gather for a 2019 awards ceremony at Fort Bragg, N.C. Roughly 1,200 soldiers at the base are preparing to move in phases from barracks that Fort Bragg leaders have deemed unsafe because of poor living conditions, base officials said Tuesday, Aug. 16, 2022. (Joshua Cowden /U.S. Army)

Roughly 1,200 soldiers are now preparing to move in phases from barracks that Fort Bragg leaders have deemed unsafe because of poor living conditions, the Army base in North Carolina said Tuesday.

The soldiers are living in barracks buildings built in the 1970s in an area of Fort Bragg known as Smoke Bomb Hill. Base officials decided Aug. 4 that the barracks “no longer meet today’s heating, ventilation and air conditioning standards.”

“Continuous repairs and changes to air flow created higher than normal moisture levels and quality-of-life concerns,” the base said.

Soldiers at the base have reported issues with mold in barracks rooms, and those living at Smoke Bomb Hill will move to other barracks on the base. A soldier who is living in unaffected barracks at Fort Bragg and spoke on the condition of anonymity said soldiers in his unit are moving to make space for those being relocated from Smoke Bomb Hill.

For some, it’s the third or fourth time that they have been forced to move in the past year, and it sometimes means losing their weekend to do so, the soldier said.

Army officials did not say Tuesday how long the phased approach could take or when the unsafe barracks will be completely empty. Officials said the approach will allow them to keep units close together when possible.

Last week, a Fort Bragg spokesperson said the affected barracks buildings make up about 12% of all single soldier living space at Fort Bragg but that the move will not compromise the amount of space and privacy soldiers are required to have under Army regulations.

For the move, the spokesperson said Fort Bragg has hired a professional moving company to handle soldiers’ personal items. If soldiers have items damaged from water or mold in the building, they can fill out forms to seek reimbursement, base officials said.

The Army has publicly struggled in the past four years with health and safety concerns in its housing for soldiers and families, following a 2018 Reuters report about the sometimes dangerous conditions in homes. Residents of family housing and barracks have reported problems with mold, pest infestations and slow or ineffective response to maintenance requests.

Privatized companies are responsible for the conditions within the majority of family housing at military bases in the U.S., but the Army is responsible for its barracks. The maintenance in barracks is typically overseen by the base’s Department of Public Works.

Congress has issued a series of family housing reforms that have made improvements, and Army leaders pledged in 2020 to invest nearly $10 billion for 10 years. Officials at Fort Bragg did not immediately respond to questions about how much of that money is dedicated to the barracks at Smoke Bomb Hill and what impact emptying them would have on any projected construction funding.

The 2022 National Defense Authorization Act, which sets annual spending for the military, did not include any military construction money for barracks at Fort Bragg.

Some soldiers will be offered basic allowance for housing to move off base, but that decision is dependent on each soldier’s rank and promotion status, Fort Bragg said. The availability of off-base housing could delay those moves. The amount of the allowance would depend on the soldier’s rank, but would likely be about $1,200 a month, according to the Defense Travel Management Office website.

“Fort Bragg will provide relocation services and support to ensure a smooth transition for all soldiers,” base officials said.

Once the barracks are empty, the majority of the buildings will be demolished and rebuilt, and five will be renovated. About 10-12 buildings are involved, a spokesperson said last week.

Base officials said the work would be completed between fiscal years 2025 and 2027, which is longer than officials previously said. Last week, the spokesperson said the renovations would only take about one year.

“Our enduring obligation at Fort Bragg and as Army leaders is to take care of our people — our soldiers and their families. Their health and welfare are of the utmost importance to our Army readiness,” Fort Bragg said.

Fort Bragg is dubbed the Army’s home for airborne and special operations, according to its website. It has about 57,000 active-duty service members and its largest units are the XVIII Airborne Corps, 82nd Airborne Division and Special Operations Command.