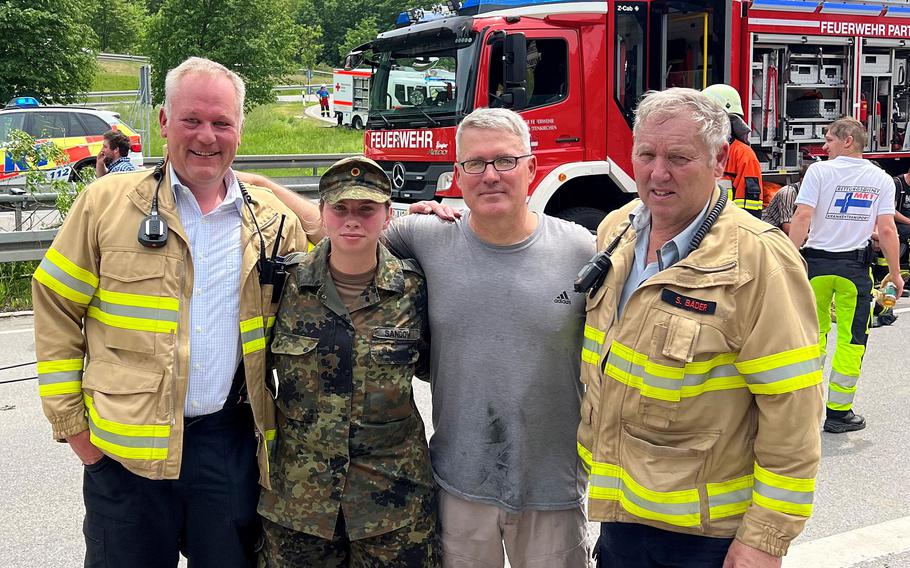 Army Col. Charles Bergman, second from right, was one of the first on the scene June 3, 2022, at a catastrophic train derailment near Garmisch-Partenkirchen, Germany, that killed five people and injured more than 40. He spent 90 minutes helping rescue survivors and credited his Army training for equipping him to take charge of the situation. Here he poses with other rescuers. (Charles Bergman)

Army Col. Charles Bergman was on his way to meet his family Friday for a long weekend when the vehicle ahead of him on the road to Garmisch-Partenkirchen, Germany, swerved abruptly.

It was the first sign that life was about to change. Next came a rush of dirt, mud and water flooding onto the roadway. Then Bergman couldn’t believe what he was seeing.

A Deutsche Bahn train was flying off its tracks, one of its five cars angling sideways as it screeched through the trees and turned nearly upside down. After slamming into a creek bed, it came to rest. Bergman pulled over and ran to the guardrail.

“People started coming out of the trees, bloody and crying,” he said. First 10 of them, then 20, then 30. Others were lying in the creek.

Bergman, 51, had happened upon one of Germany’s worst train crashes in years. Among the five people who died, two were Ukrainian women who’d fled the war with their children. A teenage boy and two women accounted for the other fatalities, and more than 40 people were injured.

“I don’t know how to explain it,” said Bergman, who is serving as an exchange officer with the German 10th Panzer Division, headquartered in Veitshoechheim. “Everything went into slow motion.”

The career infantry officer’s years of training took over. He and another man went to work managing the scene as others showed up to help.

Bergman and others stopped traffic, called rescuers, helped people out of the creek, checked airways and wounds, laid injured people near the side of the road and tried to calm hysterical victims. 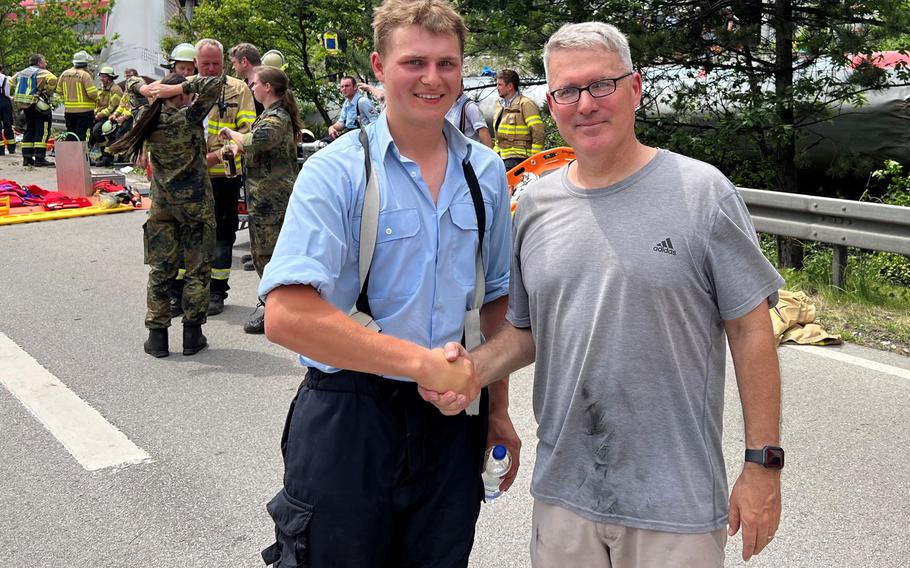 Army Col. Charles Bergman, right, and Martin Maurer of the Partenkirchen fire department were among the rescuers June 3, 2022, when a train derailed near Garmisch-Partenkirchen, Germany, killing five people and injuring more than 40. (Charles Bergman)

Bergman heard wailing from inside the mangled train car and knew he had to go in. He steeled himself for what he might see as he crawled inside.

“Mein kind!” a woman holding a bloodied toddler was screaming. “My child!”

But the toddler was relatively OK. To Bergman’s horror, however, the woman’s other child, a girl about 4 years old, urgently needed help. Her head was outside the train, grotesquely pinned against trees and bushes.

She cried, and Bergman rejoiced because it meant she was still alive. He hugged the mother.

“Help is on the way,” he told the woman as the sound of sirens filled the air.

Besides the mother and her two children, there were three other people in the overturned carriage, including a moaning man who also was trapped between the train and trees. Bergman felt his pulse, touched his face and reassured him, too.

After helping the woman, her toddler and two passengers with suspected broken bones out of the train car, he waited to leave until the man and the girl had been extricated and flown to hospitals.

German paramedics told him the girl had been taken to Munich for treatment and was alive.

Bergman has deployed to war zones such as Iraq. He’s seen terrible things. But what he witnessed in this normally idyllic Bavarian landscape haunts him.

“It was the scariest scene I’ve ever seen in my life,” he said.

All told, Bergman spent about 90 minutes at the crash site, he said, alerting the expert German rescuers to emergent patients, helping put people on stretchers and assisting in any other way he could.

According to German news outlet Deutsche Welle, a task force is looking into the cause of the accident, and Munich prosecutors are investigating three Deutsche Bahn employees on suspicion of involuntary manslaughter.

After getting back on his way, Bergman called his wife but couldn’t get the words out. He called an Army buddy to talk it over. Later, he hugged his children more tightly than usual.

That night, he couldn’t sleep at all, he said. He still thinks about the girl and the man who were trapped and wonders how they are.