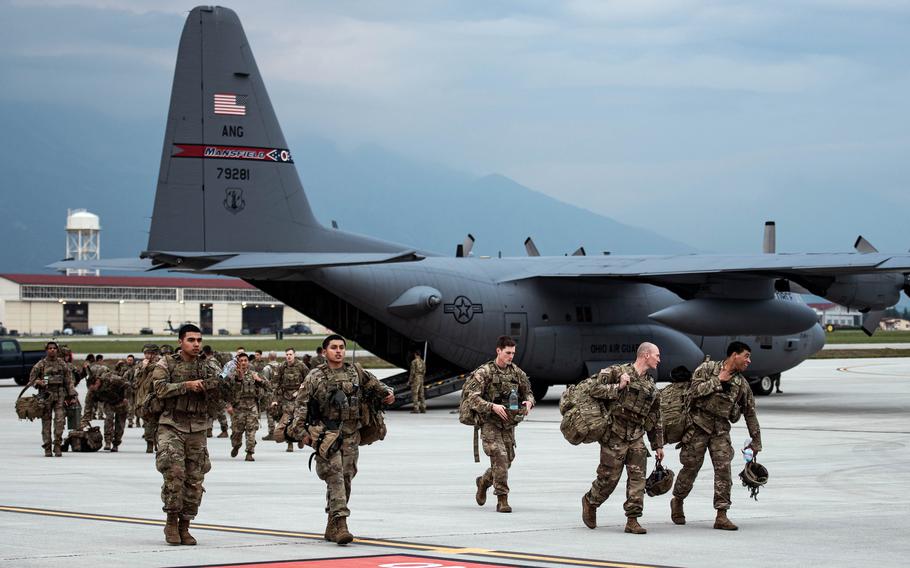 U.S. Army paratroopers assigned to 2nd Battalion, 503rd Infantry Regiment arrive at Aviano Air Base, Italy, on May 23, 2022, after their deployment to Latvia. During the deployment, the paratroopers took part in training exercises with NATO allies. (John Yountz/U.S. Army)

VICENZA, Italy ⁠— More than 300 paratroopers from the 173rd Airborne Brigade are back at their home base after deploying to Latvia to support NATO following the February launch of Russia's full-scale invasion of Ukraine.

Some 330 troops assigned to 2nd Battalion, 503rd Airborne Infantry Regiment finished the return trip to Italy on Wednesday from their mission at Camp Adazi, Latvia, the brigade said Thursday. Some troops were already back in Italy on Monday.

Multiple flights were required to ferry the troops back, so the return of the battalion was spread over three days.

The unit deployed to Latvia on Feb. 24, the start of the Russia-Ukraine war, within 17 hours of notification, according to the brigade.

The 173rd Airborne Brigade is the Army's contingency response force in Europe, rapidly deploying to the U.S., European, African and Central Command areas of responsibility. It routinely trains alongside NATO allies and partners.