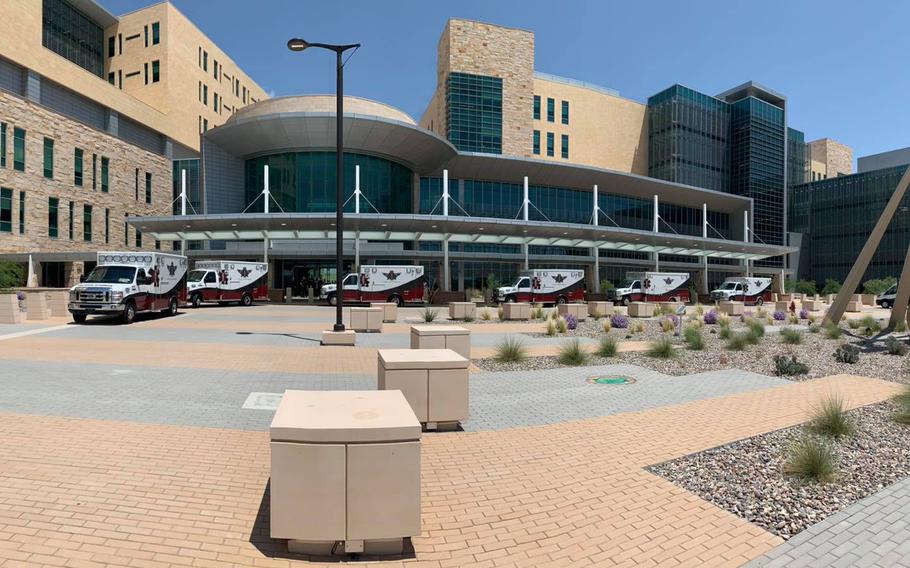 The William Beaumont Army Medical Center, which opened at Fort Bliss, Texas, in July, announced April 7, 2022, it was operating at limited capacity after internal plumbing issues caused the hospital’s water to have sediment in it. Base officials announced Tuesday, April 19, 2022, that most services have returned to the hospital after a water valve was determined to be the problem. (Photo provided by William Beaumont Army Medical Center)

Most services have returned for patients at the Fort Bliss hospital, including elective surgeries and trauma cases, after an internal plumbing issue caused a halt to water use at the facility 12 days ago, officials at the Texas Army base said Tuesday.

The hospital has relied on bottled water and bulk water systems as officials worked to identify what led to discoloration and sediment in the water supply of the recently opened William Beaumont Army Medical Center.

Officials now believe valve failure on the hospital’s water softener system introduced brine, or salty water, into the main system, according to Fort Bliss. This caused “limited pipe corrosion” that resulted in the discoloration and sediment.

Preliminary test samples confirmed the absence of biological hazards or pathogens in the water, as have previous test results. The decision from Col. Brett Venable, hospital commander, to limit operations starting April 7 came from an abundance of caution, Fort Bliss said.

Meanwhile, hospital facilities staff and maintenance engineers are working to remove the brine corrosion from the affected areas, ordering replacement parts and materials, and repairing the valve, Fort Bliss said.

Regional Health Command-Central, the U.S. Army Corps of Engineers, the Defense Health Agency and the Army Public Health Center have experts on-site and are planning a “high-speed directional water flush, once all system components are inspected and operational,” the base said. “The water flush will move large volumes of water through the hospital’s domestic water system, removing any remaining debris.”

Once all the work is complete, Venable will use additional testing to determine whether to lift the water advisory.

As work continues, the Fort Bliss hospital has established a contract with an El Paso-area hospital to sterilize equipment and supplies.

The Army began moving into the $1.3 billion hospital in July, and the new William Beaumont was fully operational in August. Staff members reported March 25 that one department identified debris in its water, according to Fort Bliss. Nearly two weeks later, water troubles were identified in other departments.

Since April 7, teams from various military agencies have worked to track down the issue and find a solution.

Fort Bliss established an information page on the hospital’s website with daily updates and answers to frequently asked question, which is located at https://william-beaumont.tricare.mil/Patient-Resources/Water-Advisory.