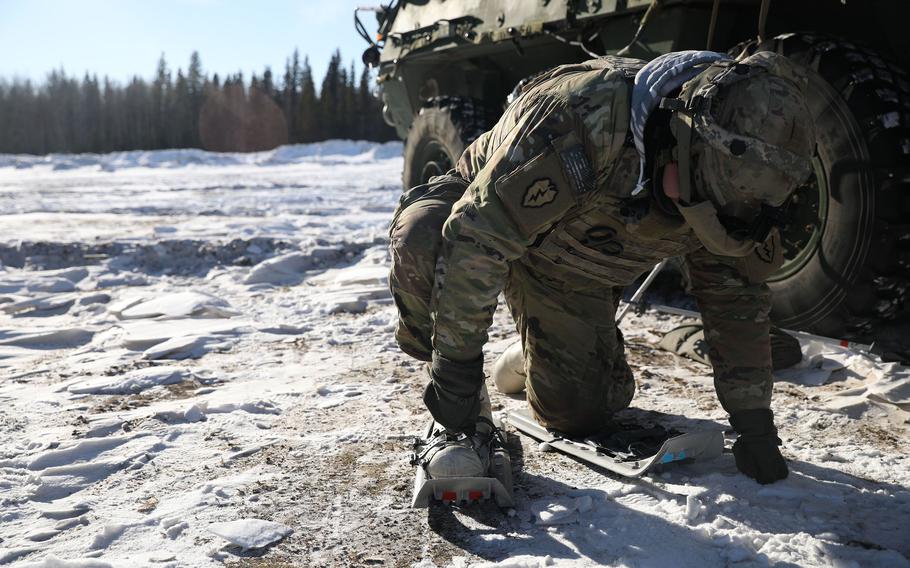 Roughly 8,000 soldiers are training in sub-zero temperatures in Alaska in what the Army says is major progress in implementing its year-old Arctic strategy.

“Regaining Arctic Dominance,” a report issued by the Army in March last year, laid out how the service planned to train, organize and equip cold-weather forces so they could successfully partner with Arctic allies and maintain regional stability — all with a watchful eye on Russia.

The Joint Pacific Multinational Readiness Center exercise, which kicked off March 9 and runs through March 24, is the first in which the Army employs its newly conceived “home-station” combat training center to Alaska.

In this case it is being used to evaluate the combat capabilities of the Fort Wainwright-based 1st Stryker Brigade Combat Team during battle scenarios at the Donnelly and Yukon training areas in southcentral Alaska.

This is only the second time the Army has used the home-station concept after its initial trial in Hawaii last year.

This month’s training took the Arctic strategy and “put it into action,” Gen. Charles Flynn, commander of U.S. Army Pacific, told reporters during a conference call Wednesday from Wainwright. 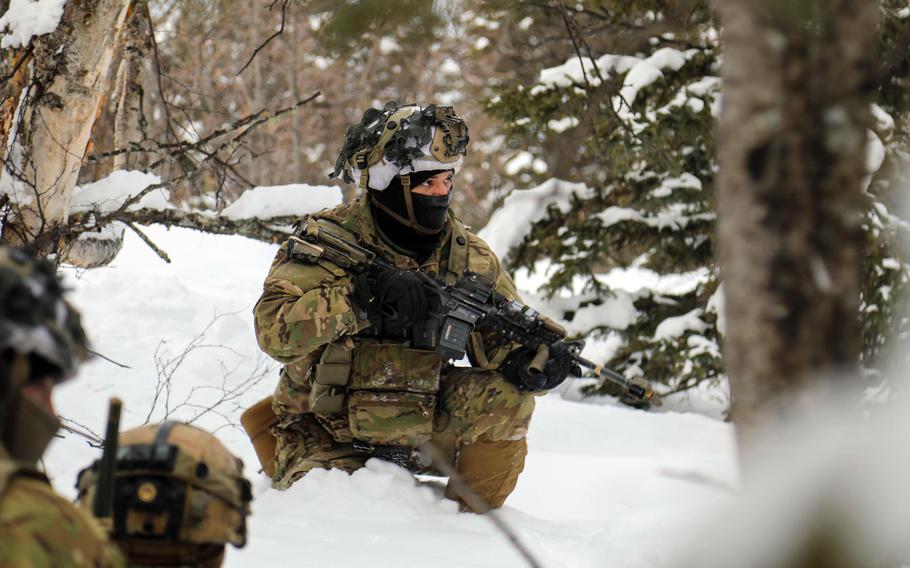 “The implementation plan of that strategy is what's being manifested today here in Alaska with a combat training center rotation in Alaska using the unique and extraordinary capabilities that are up here in the Yukon and Donnelly training areas in Alaska,” said Flynn, who was joined by Gen. Michael Garrett, head of U.S. Army Forces Command.

The advantages of a home-station rotation in Alaska are significant, the exercise’s support group commander told Stars and Stripes in a phone interview Wednesday.

“A big part of this is just the availability and the timing of moving equipment,” said Col. Jody Shouse, who is also commander of 4th Infantry Brigade Combat Team, 25th Infantry Division.

Equipment and vehicles from Wainwright in Fairbanks can be moved to Donnelly in a matter of days, he said.

“If we were to go to [training centers in Louisiana or California], we would have to put that stuff on boats, and then it would go from boats at some location to a rail line and go from a rail line to one of the two locations,” Shouse said.

“We would lose our equipment for about two months prior to the exercise even starting, if not longer, and then it would take two months on the backside to get it back,” he said. “Here, we can start the flow of equipment right at the end of the exercise, and we can have it back at our home base within a matter of days versus months.”

From an Army readiness perspective, a home-station rotation is a good-sense idea that is overdue, Garrett said.

“The reason we hadn't done this before is because the whole Army was on this Global War on Terrorism and this Middle East rotation,” he said. “It didn’t matter where you were – Hawaii, Alaska – at some point you were going to Iraq or Afghanistan.”

The home-station concept is more attuned to how and where a unit is likely to be deployed in the new era of competition with Russia and China.

Sending a brigade out of Alaska to a training center in a mild clime during winter is counterproductive to Arctic strategy objectives, Shouse said.

“But by doing it here, we're doing it in extreme temperatures and meeting that objective,” he said, noting that temperature lows at the training site last weekend were near minus 30.