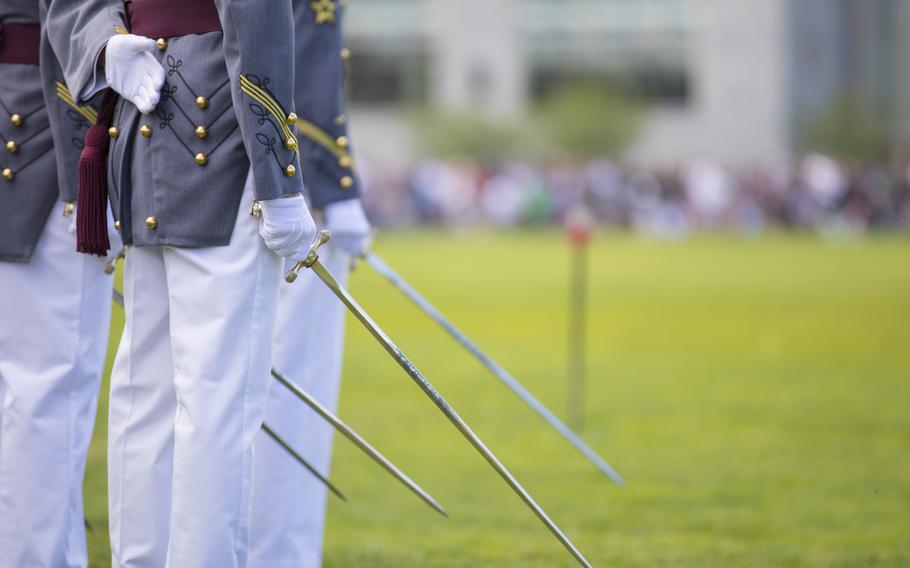 Cadets participate in a graduation parade rehearsal on May 24, 2019, at West Point, N.Y. Authorities in Florida arrested a suspect in a case involving West Point cadets who overdosed Thursday, March 10, 2022, on a substance laced with fentanyl while they were on spring break. (Matthew Moeller/U.S. Army)

FORT LAUDERDALE, Fla. (Tribune News Service) — The suspect arrested Friday night for selling fentanyl-laced cocaine to spring breakers in Wilton Manors, including four cadets from the U.S. Military Academy at West Point, one of whom is a football player, has been named by officials.

Axel Giovany Casseus, 21, of Lauderhill, is being charged for selling the tainted cocaine to the victims, according to the Broward Sheriff's Office. The victims were hospitalized Thursday.

Detectives with the Broward County Drug Task Force (BCDTF) reached Casseus via his cellphone Friday, according to the arrest report.

According to the report, a BCDTF detective posed as a drug buyer and purchased $1,000 worth of cocaine. The transaction, which was recorded via audio and video, happened in a parking lot in the 1800 block of South Federal Highway in Fort Lauderdale.

After the sale, detectives followed Casseus to Hollywood, where he was arrested without incident.

Casseus has been charged with one felony count of trafficking cocaine less than 200 grams. He's being held at the Broward Main Jail on a $50,000 bond for the cocaine charge. He also has a no bond on a burglary charge, which, according to court records, dates to January 2020.

At least six people were hospitalized for ingesting the tainted cocaine Thursday. Four are cadets at the U.S. Military Academy at West Point, and one of those four is an Army football player, according to an Army spokesperson.

Late Friday evening Wilton Manors police put out a statement announcing the arrest and said the students were on spring break from New York. West Point, which is in New York, issued a statement Friday afternoon confirming that cadets were involved and saying the academy was looking into it.

"The U.S. Military Academy is aware of the situation involving West Point cadets, which occurred Thursday night in Wilton Manors, FL," said a statement from the academy's public affairs office. "The incident is currently under investigation and no other details are available at this time."

Fentanyl, commonly used by dealers to make batches of heroin or cocaine go further, is a killer that accounts for the vast majority of accidental overdose deaths in Broward County. A 2017 Florida law allows drug dealers to face murder charges if a fentanyl sale led to an overdose.

Four of the victims were taken to Broward Health Medical Center in Fort Lauderdale, while the other two were taken to Holy Cross Health. By Friday, one person had been released, two remained in critical condition and on ventilators, and three were in stable condition, according to police.

A seventh person, a woman, was also later taken to the hospital and treated. Her condition, and whether she had also overdosed, is unknown.