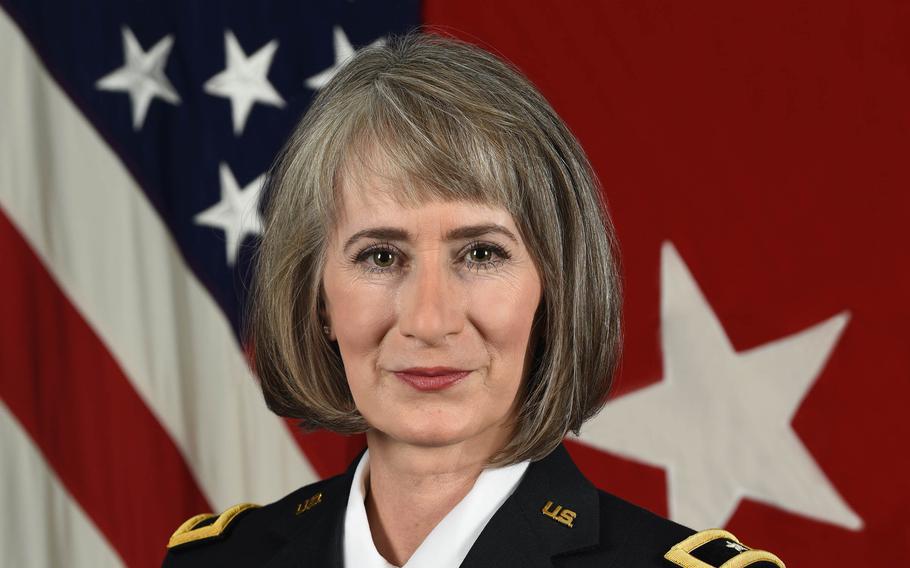 Army Brig. Gen. Amy Johnston, formerly Hannah, was suspended as the service chief of public affairs pending an inspector general investigation for counterproductive and toxic leadership. The Army has cleared Johnston to retire from the service as a brigadier general, a service spokesperson said Wednesday, Feb. 23, 2022. (U.S. Army photo)

The Army’s top public affairs soldier, who was suspended from her duties last year amid toxic leadership allegations, has been cleared to retire from the service as a brigadier general, a service spokesperson said Wednesday.

Johnston, the Army chief of public affairs, was issued a general officer’s memorandum of reprimand following the IG investigation, a typically career-ending administrative punishment, but she will retire with the benefits of a one-star general, the spokesperson said.

“The Department of the Army inspector general investigation into … Johnston has concluded and appropriate administrative action was taken,” the spokesperson wrote in an email. “She is in transition status preparing for her approved retirement.”

Her official retirement date was not immediately available on Wednesday, the spokesperson said.

Johnston, who previously used the last name Hannah, became chief of public affairs in April 2019, putting her in charge of the Army’s communications activities and its efforts to shape the service’s public appearance. In that role, she was also the Army’s top adviser on public messaging for the service’s top leaders.

Before her arrival at the Pentagon, Johnston served as director of the Army’s Marketing and Research Task Force in Washington, D.C., and as the top public affairs officer for the Supreme Headquarters Allied Powers Europe, the 82nd Airborne Division at Fort Bragg, N.C., and for the Army secretary.

She was suspended in September following a command climate survey that showed some 97% of Army public affairs personnel felt they had experienced a hostile work environment under her leadership, an Army official said at the time. Complaints filed with the inspector general made similar accusations about Johnston’s leadership, the official said.

Johnston also played a role in building the Army’s communication response to the 2020 disappearance and death of Spc. Vanessa Guillen at Fort Hood, Texas, according to an Army investigation. The report from the investigation found the response was ineffective and the case became the impetus for an ongoing effort to improve Army public affairs.

Michael Brady, the civilian principal deputy chief for Army public affairs, has filled in as the Army’s top public affairs official in Johnston’s absence. The Army has not named a permanent replacement for the retiring general, the service spokesperson said.