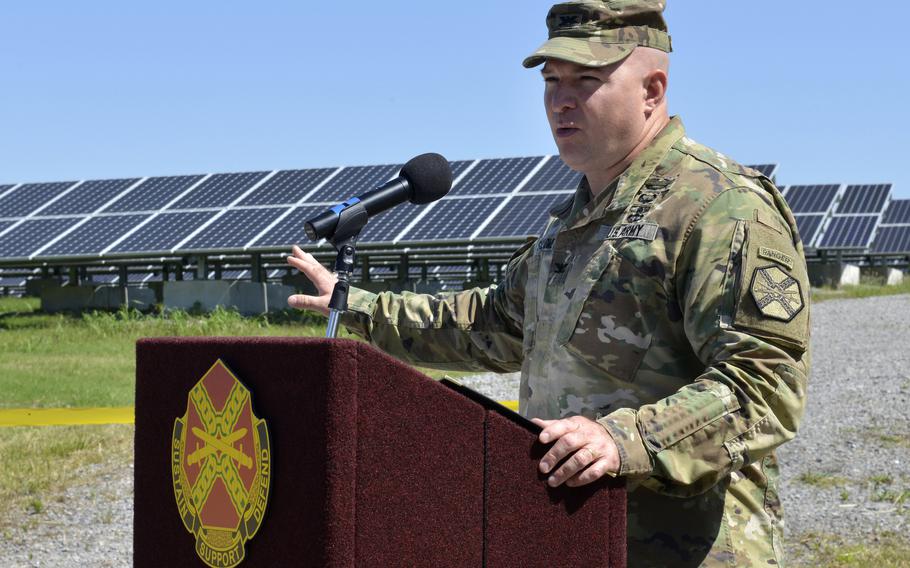 Army Col. Rob Salome, the garrison commander, speaks during the solar array ribbon-cutting ceremony at Fort Campbell, Ky., on June 9, 2017. At the time, the Solar Array Park safely generated five megawatts of solar energy and provided 10% of the power used at the Army base. (Samuel Shore/U.S. Army)

Top Army leaders argue steps they plan to take to address Earth’s changing climate will not only reduce the greenhouse gas output by the service but will also make American soldiers more effective on the battlefield, according to a new strategy rolled out this week.

The Army will spend the coming years investing in renewable energy sources, upgrading its massive vehicle fleet, strengthening power grids at its installations, and preparing soldiers to live and fight in increasingly harsher weather conditions, according to the 20-page Army Climate Strategy published Tuesday. The steps are designed to lower the Army’s own impact on the climate crisis while also ensuring U.S. soldiers can “fight and win the nation’s wars” even in the most extreme conditions, said Paul Farnan, the assistant Army secretary for installations, energy and environment.

Farnan pointed to some examples. Electric or hybrid vehicles, he said, can idle silently thus providing the power needed to run critical communications and other systems silently and with a much-reduced heat signature. This could make soldiers harder to find for enemy forces, Farnan said. Solar fields built by local utility companies on dozens of Army installations, he added, can be used to power critical base infrastructure if the power grid goes down.

The new Army plan comes some four months after the Pentagon rolled out its new climate-focused strategy in October, which labeled the issue as an “existential threat” to U.S. national security and pledged to curb the Defense Department’s large contribution to greenhouse gas emissions. The Defense Department is the single largest institutional consumer of fossil fuels in the world and emits more greenhouse gas than two-thirds of all the nations on Earth, according to the Pentagon.

“The Army, frankly, has been in the lead on this for some time — even if perhaps it's gone through periods of being less vocal in advertising what it's doing,” she said Tuesday hours after the strategy’s release.

The Army intends to reduce its own greenhouse gas emissions 50% by 2030 compared to 2005 levels and achieve net-zero emission by 2050, according to the strategy. It will rely on the move toward electrifying most of the vehicles in its inventory during the coming years, starting with its non-tactical vehicles — such as cars, trucks, vans and buses — and its light tactical vehicles such as the replacement for Humvees — Joint Light Tactical Vehicles.

The service has already taken steps to reduce its reliance on fossil fuels in its non-tactical vehicle fleet. Since the end of 2020, the Army has removed 18,000 gas-powered, non-tactical vehicles from its fleet, and it increased its inventory of hybrid vehicles by some 3,000 during the last three years, according to the strategy. Those changes have slashed Army fuel consumption by some 13 million gallons per year and reduced its greenhouse gas emissions per mile driven by more than 12%, the documents state.

The Army also plans for its fleet of light-duty, non-military vehicles to be fully electric by 2027 and all its non-tactical vehicles by 2035. Starting this year, the Army will begin expanding its charging infrastructure on its about 130 installations, planning to add some 470 chargers in 2022, the strategy said.

Farnan said the Army would work together with manufacturers to bolster electric vehicle research for the service. Battery-powered vehicles are still in their infancy and acceptance by the American public has been slow due to several factors including supply issues and anxiety about their driving range, officials said.

That, in part, is why the Army has a slower timeline to adapt its fighting vehicles to all-electric, Farnan said. The strategy calls for the Army to field purpose-built, hybrid-drive tactical vehicles by 2035 and move to all-electric tactical vehicles by 2050. He said the Army is already looking at ways to electrify its most powerful vehicles such as tanks and self-propelled artillery, but it will be years before technology advances to fully power them.

“We are going to push hard to get there, but we’re going to be methodical and deliberate as we do to make sure that as we implement these changes, rather than impeding the mission effectiveness of these systems, we're actually enhancing it,” Farnan said. “The technology development and maturation of this technology is still happening. If we look back 10 years ago, and where EVs were and where we are today, I don't think anyone sitting in 2010 would have imagined where we're going with EVs today.”

The strategy also calls for the Army to further bolster its installations against extreme weather by building energy efficient buildings, investing in pollution-free power generation, and building microgrids on every Army post by 2035.

The Army has already taken steps toward many of those goals, Farnan said, calling the strategy a “significant step forward” more than a “drastic change” for the service. Already the Army has leased thousands of acres to local power utilities for solar farms, and it has long built energy efficient buildings. Building microgrids, he said, could prove challenging at certain locations, but it’s necessary for the Army to ensure its most important systems can be run outside of the national grid.

Meanwhile, he said, the Army will begin in 2024 publishing “climate change lessons and best practices” every other year to ensure its soldiers are prepared for whatever environment in which they are asked to train or fight. The strategy calls for soldiers to consider climate change-related risks and threats in all Army “operational and strategic exercises and simulations ... by 2028.”

“Everything in this strategy is going to enable our [climate-related] priorities and mission, increase our capabilities for the fighting force and increase the resiliency and protection of our installations,” Farnan said. “It’s going to address the very real threat that is climate change … because in addition to defending our nation on the battlefield, we also need to be good stewards of our environment and our resources here at home.”