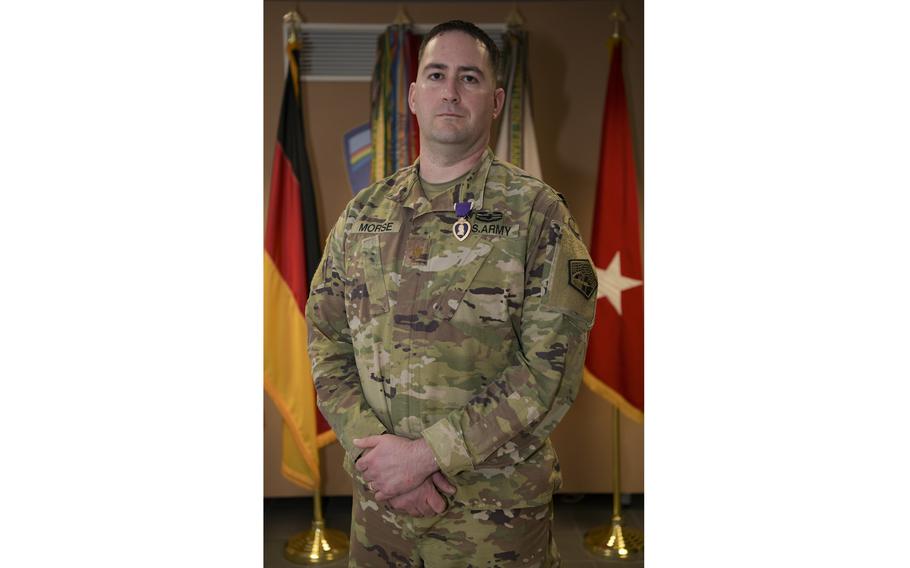 U.S. Army Maj. Robert Morse, chief of theater operations for Regional Cyber Center-Europe, U.S. Army Cyber Command, wears the Purple Heart award after being presented with it during a small ceremony at the Lt. Gen. Geoffrey Keyes Building on Clay Kaserne, on Dec. 17, in Wiesbaden, Germany. Morse was awarded the Purple Heart for a traumatic brain injury and other injuries he sustained during the Jan. 8, 2020, Iranian missile attack against al Asad Air Base in Iraq. (Ashley Morris/U.S. Army)

ADRIAN, Mich. (Tribune News Service) — From the time he was 2 years old, 36-year-old Maj. Robert Morse wanted to be a soldier. Born and raised in Adrian, Morse recently received an award from the Army that he never wished to get but he is using it to help others.

Morse received a Purple Heart for a traumatic brain injury that he sustained in 2020 in a missile attack at al Asad Air Base in Iraq.

He was wounded during the Jan. 8, 2020, theater ballistic missile attack by Iran. The attack started a little after midnight when the first of seven waves began striking al Asad Air Base. In total, 13 ballistic missiles were launched at the base.

“The closest impact was approximately 75 meters from my location, and the building I was in being within the primary percussion wave range of 11 of the 13 missiles. Each one of these missiles had warheads weighing between 1,000 and 2,000 pounds each and were the length of a semi-truck trailer,” Morse said in an email.

In the hours prior to the attack on the night of Jan. 7, Morse was in a video teleconference meeting when the company commander entered to inform him that everyone had to leave the base and they would depart in two hours. Morse was among the 12 that stayed behind who were hand selected from the S1 (human resources), S2 (intelligence), S6 (communications) and headquarters elements.

“I truly believe that leadership at all levels made good decisions that night that averted a disaster and saved lives,” Morse said.

Morse said the building itself was well sheltered to the back by a hill, however, the terrain funneled the percussion waves of the strikes directly into the unprotected open side of the facility. So as the rounds got closer the impacts would blow open the exterior doors and the percussion waves would funnel down the straight hallway creating an echo chamber.

“The building was a Saddam-era building built out of cinder blocks, which provided protection from small munitions and rockets, but not missiles. I had placed myself in the hallway in the middle of the building during all but one wave, and thus ended up becoming wounded by the succession of percussion waves. Of the 12 of us, I am aware of six having been diagnosed with a mild traumatic brain injury; all six at some point, were in the hallway during the attack,” Morse said.

“As the missiles approached, the building would start shaking and it sounded like a freight train was right over your head coming straight at you. ... The first time the doors were blown open it felt like the building had taken a direct hit, the hallway instantly became much brighter with a hazy glow, smoke, and a sulfur burning smell filled the building. I could see the percussion wave billowing towards me like it was moving in slow motion, with nothing to do but brace myself in the reinforced doorway. Throughout the attack the doors consistently would be blown open and the percussion waves continued down that hallway to our locations. After every strike you could feel yourself and the whole building shaking and debris hitting the sides and roof of the building.”

Morse’s initial submission for the Purple Heart in April 2021 was denied. However, he believed that was an error and worked directly with the human resources command awards department chief to advocate for it to be re-reviewed.

The denial was in July 2021 and Morse was informed that the award was to be approved in early October 2021. It was officially approved on Oct. 27, 2021. He was presented the Purple Heart Dec. 17 at a ceremony in Wiesbaden, Germany, where he is currently stationed, but he had already received the certificate and medal in November.

Finding care after his tour in Iraq did not come without difficulty.

Immediately following the diagnosis of the TBI, Morse was prescribed rest and medication. The initial migraine headache took 10 days to resolve. There was a small medical clinic on the base and the extent of care available was to rest and be prescribed headache medication.

The care at Morse’s home station at Fort Wainwright in Fairbanks, Alaska, was similar to the care in Iraq. However, he was referred to the TBI clinic at Fort Lewis in Washington state. Unfortunately, the first available appointment was in April and that ended up being changed to a telehealth appointment due to COVID-19 lockdowns and restrictions.

With the limited care available due to the lockdowns, he was prescribed increasing dosages of medications for preventive and abortive therapies. Upon arriving in Germany in September 2020 and still having issues, Morse was referred to the TBI clinic in Landstuhl, which is the location the majority of those wounded in the attack were medevaced to. The team there did an initial consultation and then immediately referred him to care, which included vision, hearing, physical therapy, occupational therapy and speech therapy.

“Initially I was showing signs of confusion, and was unable to sleep due to insomnia, which continues today. In the days following the attack until the end of January, I was only getting two to three hours of sleep a night due to ongoing activities and the insomnia. I had some headaches in the early days after the attack. And the full impact and identification that I had an mTBI was the start of a debilitative migraine that lasted for more than 10 days that occurred in late January. During that migraine I often was on the verge of blacking out and/or vomiting.

“My vision was not stable and I could not be around multiple people or other noises for more than a minute or two at a time. Later upon re-deploying I was having migraines on a daily basis and found that I could not run or do other exercises without developing a migraine,” Morse said. “This continues today, where I have to take medication prior to exercising and depending on the type, intensity, and location of exercising, determines whether I will or will not end up with a significant migraine.

“For example, I can work out almost unrestricted in time and intensity on my Peloton bike, however, if I go outside to run in the morning for a distance of about 2 miles or more, I will get a migraine later in the day that will require me to take abortive medication and/or lay down. My limitations in exercising I am still working to fully realize and manage. Initially the distance was a 1/4 mile running I’d have to stop running as I’d already have developed the migraine. So this ability to run 2 miles is as a result of months of physical therapy, and training.”

Initially he was having a lot of visual distortions. With some vision training and adjusting of medication and contact lens prescriptions these have been mostly resolved. The doctor explained that this was what normally would start in someone’s 40s or 50s and take years to develop. His eyes did so over the course of hours. A lot of these issues were a result of Morse’s visual system trying to readjust to the new normal following the wound.

With the visual challenges, there was damage to his accommodation functions within the inner ear, where the eyes and ears talk to provide balance, spatial recognition and overall understanding of the nearby environment.

“This has resulted in me becoming dizzy and close to collapsing if I was to quickly move my head or go from a kneeling to standing position etc. This is another area that I have been working with the optometry and physical therapy doctors to address,” Morse said. “Working with a speech therapist I have improved my speech from where it was initially following the TBI, I am still working through those challenges but in general most people won’t/don’t recognize these complications. I also have a constant ringing in my ears.”

Morse is currently the theater operations division chief for the Regional Cyber Center-Europe. His role is to synchronize the network operations and defensive cyber operations within the European/African theaters for the Army’s portion of the Department of Defense Information Network.

He advocated for others with TBIs to get their Purple Hearts through getting his own approved.

“I was also advocating on behalf of the many others that were either denied as well or those who have not yet been submitted. In my communications with the awards branch chief it was made clear to me that the decision made on my packet would impact/inform the decisions made on many other packets with similar wounds. During these engagements, I used my wound as a starting point but focused on the TBI and why it was important to fully recognize those wounds. I am tracking 50 others have since been approved,” Morse said.

Morse was described by his father, John, as a very serious child who always knew what he wanted to do with his life.

At age 2 he came into the living room and told his parents he wanted to be a soldier. At Adrian High School, Morse participated in endurance sports like swimming, cross country and track to prepare him for survival as a member of the Army. He enlisted with the National Guard in his junior year based on the events of 9/11, which occurred just a week after he reached the enlistment age. After graduating in 2003, he went to Michigan State University on an ROTC scholarship for three years.

Altogether, Morse has been deployed three times. He will serve at least until he reaches full retirement in 2026.

“At that time, we’ll asses how much longer I stay in. Once I retire, the plan is for my wife’s career to be the priority. Currently her career has had a lot of speed bumps and challenges based on my career moving us every couple of years, requiring her to find a new job each time. When I meet full retirement, she’ll be 10 years in halfway towards her full retirement eligibility as well,” Morse said. “Ultimately my goal has been to be a battalion commander, and from there everything else would be what the Army and/or my family needs from me.”

Morse has been married to his wife, Stephanie, since 2008. The couple has two sons. The oldest is Camden, 4, and the youngest is Finley, 2. Finley was born during Morse’s last deployment in October 2019.

Visit The Daily Telegram at www.lenconnect.com