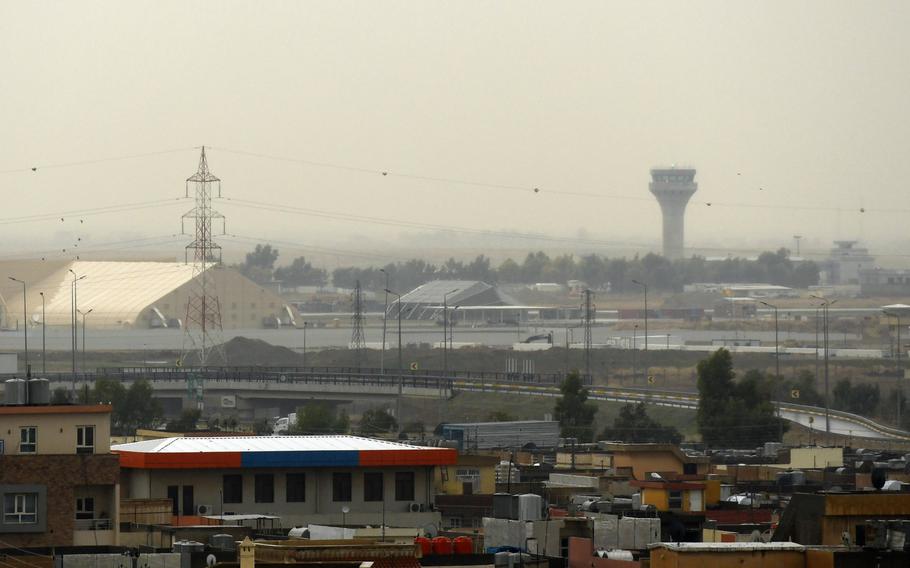 Buy Photo
The Irbil International Airport in the capital of Iraqs Kurdistan region is pictured here on Wednesday, Jan. 8, 2020, hours after an Iranian missile attack. (Chad Garland/Stars and Stripes)

WASHINGTON (Tribune News Service) — The Army more than doubled the number of Purple Heart medals awarded to soldiers wounded at their base in Iraq in a retaliatory Iranian missile attack Jan. 8, 2020, officials announced Wednesday.

The Army notified 39 soldiers Wednesday that they will receive the medals that acknowledge their wounds and grant them eligibility for a variety of entitlements.

Former President Donald Trump had minimized the traumatic brain injuries the soldiers suffered, and the Pentagon downplayed the extent of their injuries for weeks as the U.S.-Iranian conflict threatened to escalate.

The attack and its aftermath had largely receded from public view until last month. USA TODAY first reported that a U.S. commander at Al Asad at the time of the attack had been pushing for his soldiers to receive Purple Heart medals but had been instructed by his superiors not to inquire about the issue or re-submit paperwork.

Army Col. Paul Fix, of the Minnesota National Guard, in an Oct. 6, 2021, memo to Army officials, noted that 69 of his soldiers had been diagnosed with traumatic brain injury from the attack. Officials medically evacuated 25 soldiers, 41 required more than a week of rest and four returned to duty.

Fix informed the Army the attack was severe and that his soldiers had been left with inadequate protection.

Iran launched the attack in retaliation for the Jan. 2, 2020, U.S. drone strike near Baghdad's airport that killed Gen. Qasem Soleimani, leader of the Quds Force, part of the country's hard-line paramilitary Revolutionary Guard Corps. His killing was defensive, according to U.S. officials who said Soleimani had been planning attacks on American diplomats and troops.

The fog surrounding the Jan. 8, 2020, attack on Al Asad thickened fast. U.S. military officials announced within hours that no casualties had been suffered after theater ballistic missiles slammed into the base. But it soon became clear that there was extensive damage to buildings and equipment, and that dozens of troops there had suffered concussions from the massive explosions.

It took the Pentagon more than a month to acknowledge that more than 100 troops had suffered traumatic brain injuries, and that several of them had to be medically evacuated.

Trump, in a news conference, minimized the troops' wounds.

"I don't consider them very serious injuries, relative to other injuries that I've seen," Trump said after the attack. "No, I do not consider that to be bad injuries."

A soldier at the base, who continues to suffer symptoms of traumatic brain injury nearly two years after the attack, told USA TODAY that it was miraculous that no troops were killed.

On the same date, the Revolutionary Guard mistakenly shot down a Ukrainian civilian airliner in Tehran, killing 176 people. Iranian troops fired a surface-to-air missile at the plane, believing it was a U.S. warplane responding to their attack on Al Asad. Among the dead were 63 Canadian citizens.

With Wednesday's announcement, 69 soldiers have received Purple Heart medals. More may be coming.

"They continue to review an additional 11 nominations, which will be decided on the individual merits," Lt. Col. Gabe Ramirez, an Army spokesman, said Wednesday.

Trump interceded on behalf of troops accused of war crimes: in the case of retired Maj. Mathew Golsteyn, a Special Forces soldier, Trump pardoned for alleged murder in Afghanistan.

"If military leaders learned anything from some of these examples, it was likely to avoid contradicting the White House in public or otherwise," Mears said.