UK restores presence in Germany with hub for army vehicles 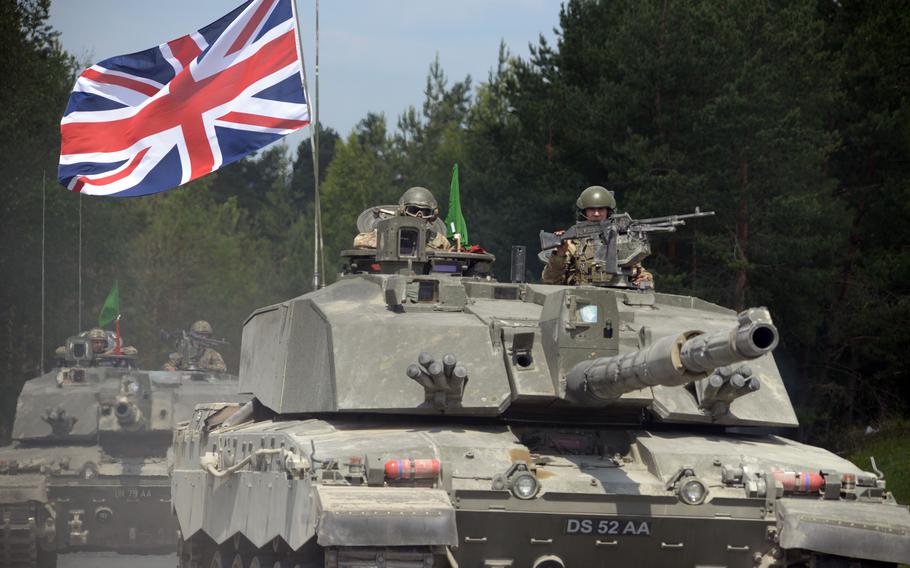 British soldiers take part in the Strong Europe Tank Challenge at Grafenwoehr Training Area in Germany in 2018. The United Kingdom is prepositioning hundreds of tanks and fighting vehicles in Germany to enable its forces to maneuver more freely around Europe. (Christoph Koppers/U.S. Army)

STUTTGART, Germany — The United Kingdom is taking a page from the U.S. Army playbook, sending hundreds of tanks and fighting vehicles back to Germany so its forces can maneuver more freely around Europe.

“It provides us a near-permanent presence in Europe in which we won’t have to get across the British channel,” Lt. Col. Julian Smith, a British army spokesman, said Wednesday.

The plan resembles initiatives that have transformed how the U.S. Army operates in Europe, where new weapons depots have been built so soldiers arriving for training or crisis response have combat gear to pull from.

Some of the equipment has already arrived at a British army post in Sennelager, Germany, and the rest of the gear is expected to be in place by the middle of next year, Smith said.

Moving British combat vehicles back into Germany will support NATO efforts to defend its eastern flank, he said.

The British army’s effort, which comes just one year after it completed a withdrawal of a Cold War-era force based in Germany, is part of a broader push toward a more durable overseas defense posture. A British tank rumbles across Sennelager Training Area in northern Germany. The British army is establishing an equipment hub in Sennelager where tanks and other fighting vehicles will be placed. (Charles Calio/U.S. Army)

The initiative, called Future Soldier, also calls for the prepositioning of British army gear in Kenya and Oman, giving soldiers regional hubs in Africa and the Middle East.

“Troops will fly in from the U.K. to conduct their training and use the vehicles that are already there,” Smith said. “We will have a persistent presence in those countries.”

Set up as an occupation force after World War II, the British Army of the Rhine numbered more than 50,000 troops in the 1970s and 1980s. It started decreasing in numbers after the end of the Cold War, and the last permanent forces departed Germany in the past decade.

A difference from past British missions in Germany is that soldiers and their family won’t take up permanent residence in the country, as was the case during the Cold War, Smith said. Instead, the emphasis is on longer troop rotations.

The American buildup in Europe has been part of a broader push to rearm after Russia’s invasion of Ukraine in 2014.

At that time, all Army battle tanks had been withdrawn from the Continent as part of a long post-Cold War drawdown that sent scores of units back to the U.S.

The new Future Soldier regional hubs also are part of an effort to streamline the force for more rapid deployments, officials said.

“Our future army will be leaner but more productive, prioritizing speed and readiness over mass and mobilization,” Defense Minister Ben Wallace said last month in an announcement of the Future Soldier plan.