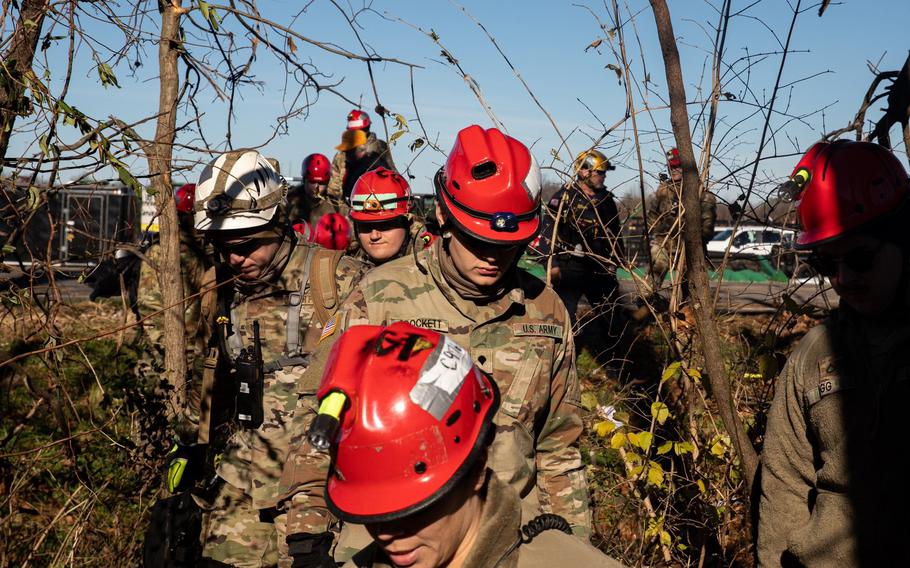 WASHINGTON — About 300 National Guard troops are supporting relief efforts after tornadoes ripped through Kentucky on Friday night leaving at least 70 people dead, according to the state’s Guard.

Gov. Andy Beshear, who referred to the storm as the state’s “most devastating, most deadly tornado event,” declared a state of emergency Friday.

“Every resource is being deployed,” the Kentucky National Guard said in a statement. “The National Guard is being positioned to search for survivors in multiple counties.”

The Air and Army National Guard troops were mobilized to help with search and rescue efforts, clearing roads and assisting law enforcement after the storm, the Guard said.

“We want to make sure everybody is being safe with all of the downed power lines and trees,” Sgt. Justin Sims of the Guard’s 438th Military Police Company said in the statement. “Many of the roads are blocked off and so MPs have helped secure the roads and let authorized personnel in so they can continue the mission.”

The Guard has also brought in search dogs and rescue teams, looking through fallen houses and a candle factory in Mayfield, Ky., where more than 100 people were working when the tornado struck, according to the statement.

Noting Monday is the National Guard’s 385th birthday, chief Pentagon spokesman John Kirby said the efforts of Kentucky’s Guard troops are a “visible, tangible way to acknowledge the contributions that the Guard has made to our national security and national defense.”

“Throughout the whole year, wherever you look, there's the National Guard,” he said. “Whether it's helping vaccinate Americans, dealing with cleanup after natural disasters to helping out customs and border officials down at the southwest border … they have been literally woven into the fabric of this entire year in terms of response and assistance to their fellow citizens.”

“We do not anticipate activations from other states with respect to this particular natural disaster,” Kirby said.