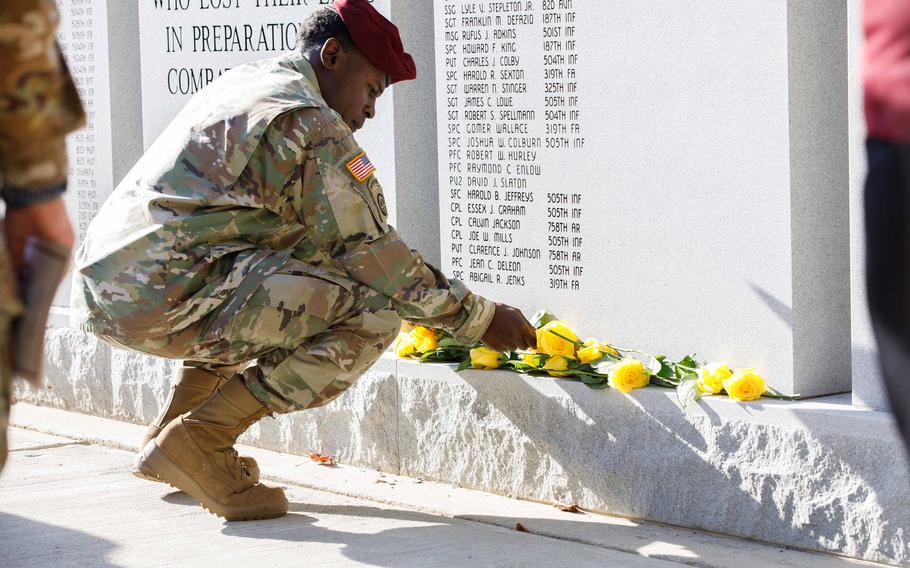 Soldiers participate in a ceremony honoring eight paratroopers killed in combat or training accidents at Fort Bragg on Nov. 18, 2021. The names of the paratrooper were added to memorial walls during the event. (U.S. Army)

FORT BRAGG (Tribune News Service) — Yellow roses were gingerly placed at the bases of the 82nd Airborne Division monuments as the names of eight paratroopers killed in combat or training accidents were added to the memorial walls during a ceremony Thursday.

The memorials honor all division paratroopers who died in combat or training accidents since the inception of the 82nd Airborne Division, Maj. Gen. Christopher Donahue, division commander, said.

“We etch a name in stone here and that really becomes our solemn promise to make sure we never, ever stop remembering and talking about our paratroopers,” Donahue said.

Added to the Global War on Terror monument was the name of Sgt. Bryan Mount.

Mount, 25, of St. George, Utah, died July 21, 2020, as the result of a vehicle-rollover accident while conducting reconnaissance operations in Eastern Syria.

Donahue said Mount was dependable, quiet, optimistic, and “a key contributor to his truck crew.

“That’s what we say about most of our paratroopers. The reality is he hated jumping out of airplanes — despised it. But he did it because he knew he had to with everybody else,” Donahue said.

Donahue said Mount had only one tattoo — a cheeseburger — to commemorate meeting his wife Michelle at In-N-Out Burger.

Spc. Abigail Jenks and Pfc. Jean Cruz De Leon are two paratroopers recently killed whose names were added to the memorial wall that honors paratroopers who died during training accidents.

Soldiers participate in a ceremony honoring eight paratroopers killed in combat or training accidents at Fort Bragg on Nov. 18, 2021. The names of the paratrooper were added to memorial walls during the event. (U.S. Army)

Jenks, of Gansevoort, New York, died April 19 during a static line training accident while jumping from a UH-60 Blackhawk at Fort Bragg.

Thursday would have marked her 21st birthday.

Jenks’ grandmother, Susan Jenks, made the drive from New York to be at Thursday’s ceremony.

Susan Jenks said anyone who met Abby loved her, and it was an honor to see her fellow paratroopers remembering her Thursday.

Jenks said her granddaughter loved animals, children and artists, and lived her life to the fullest.

She said when people see her granddaughter’s name she hopes they learn one thing about Abigail — “she cared about everybody.”

Cruz De Leon, 20, of Marrero, Louisiana, died Sept. 10, 2020, when his parachute malfunctioned during a training operation at Fort Stewart, Georgia.

“Anyone who’s ever had a platoon RTO knows and anyone who’s ever been in a rifle platoon knows that’s ‘the guy.’ Everyone relies on him,” Donahue said. “In fact, he keeps the platoon leader out of trouble.”

Donahue said Cruz was dependable, resourceful and always had parts any time a radio broke.

“He was the kid when you thought about how great the 82nd is, he jumped to the head of the line,” Donahue said.

Those paratroopers died after a B-29 aircraft “inadvertently” killed them in 1948, Donahue said.

The men were part of the 555th Parachute Infantry Battalion.

The division knows of about 400 training deaths during its history, said Jim Aarsen, director of the 82nd Airborne Division Museum where the monuments are located.

Aarsen said complete records of accidents predating the 1970s weren’t always preserved, which is why names of paratroopers of the past are being added to the monuments.

“We did a project to get all the names and unveiled this memorial about five years ago,” Aarsen said.

Aarsen said there are some paratroopers who researchers know served in the division but don’t have complete records of which specific unit they were in or when they died.

Monuments on the museum’s grounds honor paratroopers who have died in every conflict since World War I, starting with Capt. Henry Lee Jewett Williams who was killed in action on June 9, 1918, in France.

More than 230 names are etched on the Global War on Terror monument, with Mount’s name being the most recent.

“It is our duty to make sure that we always remember them,” Donahue said.

Capt. Darren Cinatl, an operations officer for the division, said the monuments allow new paratroopers to reflect on the unit’s history and sacrifices along with Gold Star families whose service members died.

“People kind of think only Memorial Day is the day we honor the fallen,” Cinatl said. “These families go through this every single day.”

The families, Cinatl said, are still connected to their soldier’s service, regardless of if he or she died in training or combat.

Thursday’s ceremony was part of the division’s “All American Days,” which was held this week in place of All American Week.

All American Week, which honors veteran and current paratroopers, was postponed because of the COVID-19 pandemic and the deployment to Afghanistan of the division’s Immediate Response Force in August.