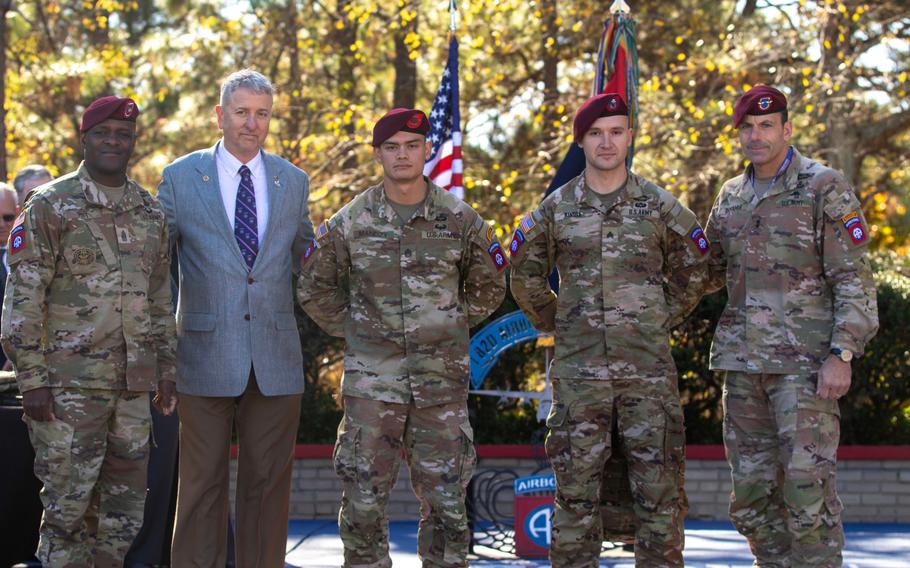 The winners competed against 15 other paratroopers in the division during a series of events earlier this year.

Jumpmaster of the Year is Sgt. 1st Class Ulrick Taylor, who is part of the 82nd Airborne Division Artillery.

Taylor participated in a two-day event last month made up of a series of events that included the Army Combat Fitness test, a jumpmaster personal inspection exam, a drop zone safety officer exam and rigging demonstration.

The competition is a new event for the division. Sixty paratroopers, two from each battalion, participated in the three-day event that measures "paratroopers lethality under extreme stress."

Command Sgt. Maj. David Pitt said the recognized soldiers are people who are "willing to go out there and compete every day to strive for excellence and be unbeatable."

Pitt referenced the Tennessee Williams' essay, "The Catastrophe of Success," in which Williams wrote about how he became "less hungry" as he became more successful.

"What I would challenge all the winners today is to not let the catastrophe of success be against you," Pitt said. "Stay hungry. You've still got a long way to go ... Keep growing forward."

All four paratroopers are heeding the advice.

"I like doing exciting things, and being a paratrooper is a huge honor and responsibility," Mandzy said. "We just had a memorial ceremony yesterday, and continuing to live that legacy and acting as a paratrooper should, is something that keeps me going every day."

A native of Wisconsin, he joined the Army in 2018 and was assigned to the 82nd Airborne Division in 2019.

He said he's honored to be part of the division's legacy.

"Being a paratrooper means being the best," Kindle said. "In my mind, we strive to be the best that we can be because of the people who came before us."

Bower is part of the 2nd Brigade Combat Team.

He is a California native who first joined the Air Force in 2012, before switching to the Army in 2019. He joined the 82nd Airborne Division in 2020.

"It means a lot to be a part of the good heritage here," Bower said.

Each of the winners recognized Friday were presented with gift cards and gift baskets from local organizations, including the 82nd Airborne Division Association, Triple Nickle Association and Association of the United States Army.