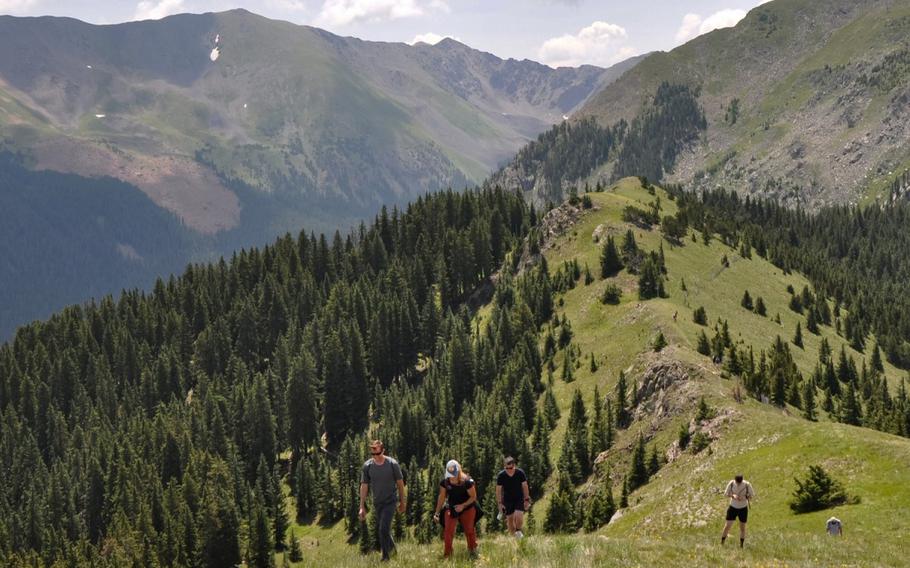 U.S. Army Research Institute of Environmental Medicine scientists, University of New Mexico emergency care providers, and 5th Engineer Battalion Soldiers return from a hike to Kachina Peak in Taos Ski Valley, N.M. The study is the first ever conducted on Kachina Peak, and, with 41 study volunteers, it is the largest altitude study in USARIEMs history. (Mallory Roussel/USARIEM Public Affairs)

(Tribune News Service) — As the nation has seen in past decades, the U.S. Army has to operate and fight in hostile environments in some of the world’s highest mountains.

To find out how this affects soldiers and who may be better adapted to operate at high altitude and how to protect them, 39 male and two female soldiers from the 5th Engineer Battalion, Fort Leonard Wood, Mo., spent several days at Taos Ski Valley this summer, hiking and living at 12,000 feet.

It was a joint study by the U.S. Army Research Institute of Environmental Medicine (USARIEM) in Natick, Mass., and the University of New Mexico’s International Mountain Medicine Center.

Dr. Beth Beidleman, a research physiologist with USARIEM and principal investigator of the research project, said the Army institute has been researching Acute Mountain Sickness for years and they don’t totally understand it yet.

“They (the Army) want to prevent illness before it happens,” Beidleman said, in summarizing the study.

“The primary purpose of this study was to validate a new Army tool called the Acute Mountain Sickness (AMS) Alert Algorithm that successfully predicts AMS in real time prior to its occurrence,” Beidleman said in a recent telephone interview.

The study included a sea-level part at Fort Leonard Wood and the high-altitude portion at TSV.

“We are currently analyzing all the data we collected. We finished Aug. 1,” she said. “It takes a lot of time to download it and statistically analyze it.”

There are some preliminary results from the 41 soldiers who took part in the study.

“Whether active ascent versus passive ascent to altitude makes you sicker or alters the time course of acclimatization” was the key question the study is trying to answer, said Beidleman.

The UNM International Mountain Medicine Center played a key role in answering that question, she said.

Jason Williams, 36, a paramedic at UNM and director of the university’s International Mountain Medicine Center, collaborated on the study with Beidleman, leading and supervising the soldiers’ hikes.

In randomly separated groups of 10 to 15, half of the soldiers would hike (active ascent) from the ski valley base to the ski patrol shack at 12,000 feet, carrying 15% of their body weight, and the other half would be driven up (passive ascent).

“These guys went up, they basically did a 5-kilometer hike up a 15.5% grade (considered steep), which took them anywhere from one to three hours to complete, so it was a pretty strenuous hike, so we wanted to look at whether hiking up, which many military troops, or even mountaineers, have to do, versus being driven in or if you are air-dropped in from a helicopter ... made a difference in the amount of AMS that occurs,” said Beidleman.

In both groups, some became sick and some didn’t. Eleven in each group were affected by AMS, which is caused by quick exposure to low oxygen at high altitude, and can result in headaches, confusion, tiredness, vomiting and dizziness.

“We found that active ascent altered the time course of when AMS occurs,” said Beidleman.

“But there was a difference in that, in the active ascent group, eight of 11 got sickest on the first day ... and only three of them were sick the next morning and then their sickness disappeared,” she said. The passive ascent group were pretty much sick the whole time.

“We found that, with the active ascent, they got sicker quicker, but got over it,” said Beidleman.

The hiking soldiers breathe more and urinate more, and the physical activity “accelerated those processes,” said Beidleman. “They got over it (AMS) on days two and three. Typically, AMS peaks after your first day at altitude.”

“That’s the only data so far that we have fully analyzed; the rest is still being ... evaluated in terms of sleep, genomics and everything else we did,” she said.

The groups would spend three days and two nights on the mountain, and, in addition to the hikes, there was the science, said UNM’s Williams. “We essentially would run through a lot of different science where we would be taking daily blood samples, urine and saliva — they would do various, different cognitive tests, as well,” said Williams.

The daytime hikes were meant to “just kind of get them out of the ski patrol shack a little bit, but also to have them basically get a little bit of exercise at that altitude,” he said. “Then, we would rotate another group in and do it for 2 1/2 weeks.”

“It actually was difficult,” Summers said of the hikes. “It was no small feat for someone who just got up to that altitude.”

Fort Leonard Wood stands at 1,135 feet of elevation. The hikes from the ski patrol shack at the top of Chairlift Two are about three miles in length.

The study “was a very good experience to work with that organization (the Army research institute) and contribute to their study,” said Summers.

Williams noted that who will be affected by higher altitudes is a mystery. “For people coming from sea level, there is still a good amount of them that get quite sick at that moderate kind of 12,000-foot mark,” said Williams.

“The crazy thing about altitude illness is that it’s incredibly hard to predict and that’s really the key point of the study, being able to use different algorithms to validate and ... predict Acute Mountain Sickness and, at 12,000 feet, coming from sea level, people do get quite sick, and it doesn’t matter if they are super fit and young,” he said.

“There is a lot of individual variability” of who gets sick at altitude, said Beidleman. “Some people get sick and some don’t.”

“It (the study) will really change the game with altitude research and medicine, and especially for the military, will allow very rapid ascents potentially being able to predict who might get sick at these elevations or not,” said Williams.

Research into AMS is ongoing.

“We are hoping to repeat this next summer and get a much larger cohort of up to 40 females, so we can validate this pool and algorithm across both sexes,” said Beidleman.

“ Taos Ski Valley is a great partner for the U.S. Army because this is a great venue where we can do this military research at a military-relevant altitude,” she said.

UNM’s Mountain Medicine Center is part of the school of medicine, and “specializes in mountain emergency medicine and rescue,” giving seminars to health care professionals, said Williams. We “cover various different mountain rescue techniques to really get those providers out of the parking lots, into the mountains and give them the technical skills to be able to effect mountain rescues, and cover a lot of mountain medicine-centric topics, including AMS.”

For Summers, the lieutenant from the 5th Engineer Battalion, the study was a win-win. “My understanding is our research would help commanders protect soldiers who might get AMS, and plan accordingly.”