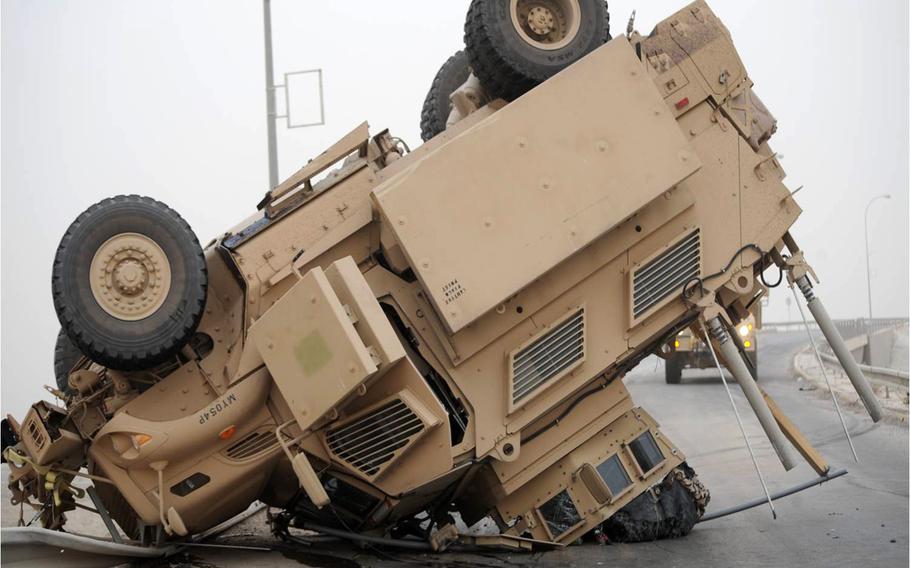 A Mine-Resistant Ambush-Protected vehicle rests on its turret and hood after a rollover. The U.S. Army Combat Readiness Center, based at Fort Rucker, Ala., on Thursday released an initial report on training accidents. (Sgt. 1st Class Ron Burke)

However, off-duty accidents rose 20% from the previous year and remained the top cause of death among soldiers, according to a preliminary report released Thursday by the U.S. Army Combat Readiness Center. A more detailed report is expected next month.

“Leaders at every echelon should be proud of this accomplishment,” Brig. Gen. Andrew C. Hilmes, commander of the combat readiness center and director of Army safety, said in a statement. “While one soldier lost to a preventable mishap is one too many, we see in the results that engaged leadership is fundamental to loss prevention.”

The readiness center’s annual report, titled the Annual Assessment of the Army Safety Program, outlines and explains on-duty ground, aviation and off-duty accident trends. It is expected to be released in late November.

Of the lives lost in 2021, nine deaths occurred in ground accidents and 11 in aviation crashes, the Army said.

While 2020’s low numbers were credited to a reduction in training caused by the ongoing coronavirus pandemic, training has since returned to its normal tempo, yet fatal accidents continued to fall, service officials said.

However, as lockdowns caused by the pandemic began to lift and allowed soldiers more leisure time, it might have contributed to the spike in off-duty accidents, the Army said. In 2021, 87 soldiers died in accidents that occurred in their downtime.

“Addressing off-duty risky behaviors in our younger soldiers, primarily in the 18-24 year age group, remains one of our greatest challenges,” Hilmes said. “Getting our junior leaders the tools and information they need to influence those underneath them will be the [safety center’s] priority in the coming year.”

When it came to curbing on-duty accidents, the Army attributed its success to raising awareness of safety during times that traditionally see a spike in accidents. By examining mishap data from fiscal years 2015 to 2019, the readiness center found accidents increased during the third quarter of the fiscal year, but especially during May and June.

Officials found those months typically see an increased operational tempo combined with personnel turnover and leader rotations, which likely contribute to the increase. The safety center launched an awareness campaign that challenged leaders to be extra vigilant during this period.

The Army’s analysis found July through September was the next deadliest time with seasonal conditions adding training challenges. The Army saw no fatal accidents during those months in 2021.

“The goal of the Department of Defense and Army is to achieve zero accidental losses. While there is inherent risk in much of what soldiers do, leaders work hard to mitigate those hazards,” the Army said in a statement. “The Army studies every soldier mishap fatality to determine ways to prevent similar incidents from occurring in the future. It also uses leading indicators such as safety climate surveys to help commanders at all levels in their mishap prevention efforts.”