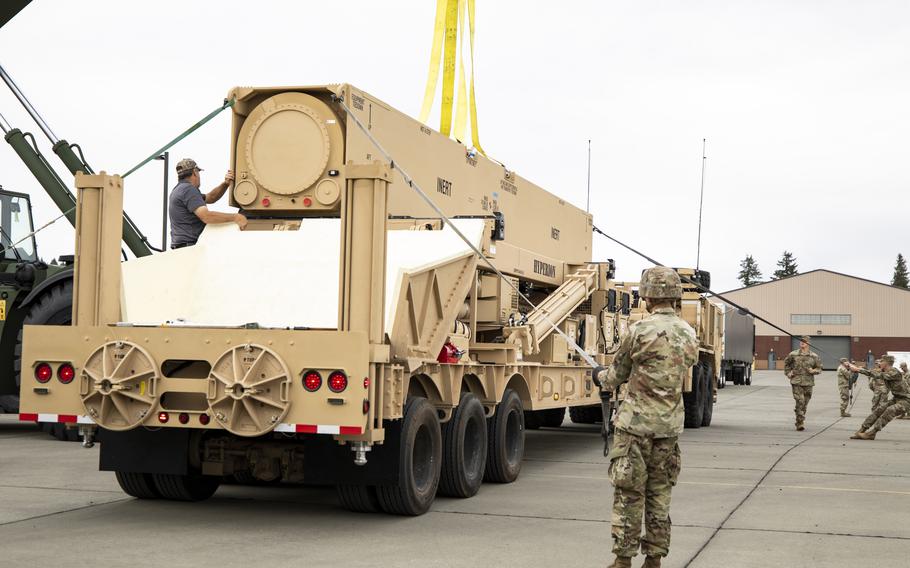 The first prototype hypersonic hardware is delivered to soldiers of 5th Battalion, 3rd Field Artillery Regiment, 17th Field Artillery Brigade at Joint Base Lewis-McChord, Wash. The Army is closer to fielding its Dark Eagle hypersonic missile after issuing the ground equipment to the unit, it said in a statement Oct. 7, 2021. (U.S. Army)

The Army is a step closer to fielding its “Dark Eagle” hypersonic missile after equipping soldiers with ground launchers that would fire the weapon at much higher speed and with greater precision than the service’s current artillery systems. Still missing is the missile itself. But the Army expects the weapon to be ready by 2023. The Dark Eagle is designed to fly 3,800 mph and hit targets 1,700 miles away with precision.

The U.S. is in a race with Russia and China to develop hypersonic weapons systems and the Pentagon has stepped up funding in hopes of getting the edge.

Still, some security analysts say the U.S. is trailing its adversaries in its development of the weapons. On Monday, the Russian Defense Ministry said it test-fired a hypersonic "Tsirkon" missile for the first time from a submarine. In speeches, President Vladimir Putin has touted Russia’s advances in various hypersonic systems as “invincible” weaponry.

The Pentagon has been involved in developing hypersonic weapons since the early 2000s. But at the time, the U.S. was heavily involved in Iraq and Afghanistan and funding for such programs was relatively limited. That has changed in recent years.

“This is due, in part, to advances in these technologies in Russia and China, leading to a heightened focus in the United States on the strategic threat posed by hypersonic flight,” a July Congressional Research Service report said.

Both China and Russia “have conducted numerous successful tests of hypersonic glide vehicles and likely fielded an operational capability,” the report said.