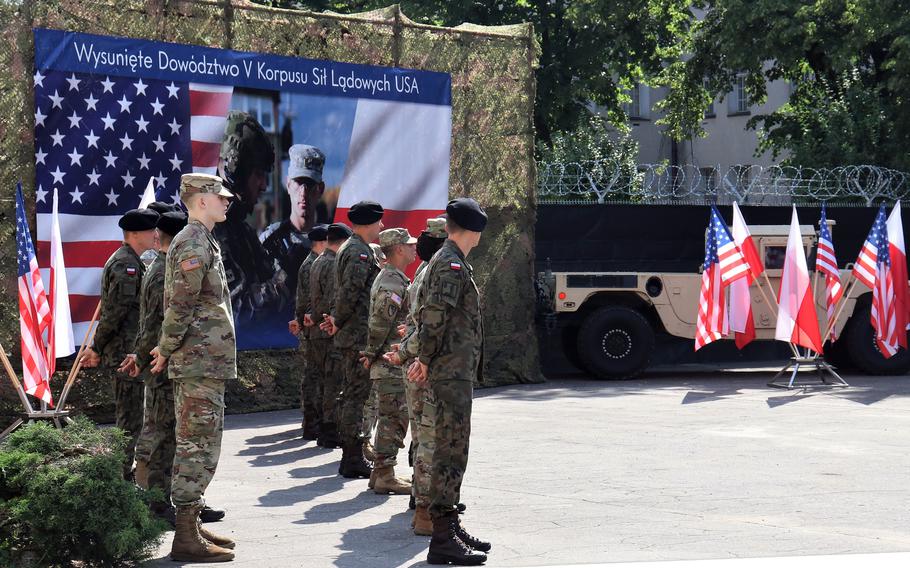 V Corps Forward marks its arrival in Poznan, Poland, with a ceremony on July 15, 2021. Plans are in the works for construction of a new $30 million U.S. Army command hub as well as a $7 million information systems facility in Poznan. ( DeLancie Horton/U.S. Army)

STUTTGART, Germany — A $30 million U.S. Army command and control headquarters in Poland is among the projects being proposed to support the military’s expansion in the country, which has emerged as a focal point for coordinating allied defense efforts along NATO’s eastern flank.

The version of the National Defense Authorization Act passed by the House last week says a defense cooperation pact between Washington and Warsaw means the Pentagon can accept “in-kind contributions” from Poland to develop the $30 million command hub, as well as a $7 million information systems facility.

The projects will be developed in the Polish city of Poznan, the forward headquarters location of the Army’s recently reestablished V Corps, the NDAA said. The proposed projects still need Senate approval.

“The U.S.-Poland Enhanced Defense Cooperation Agreement signed in 2020 provides a mechanism for the sharing of logistical and infrastructure costs for U.S. forces present in Poland,” Lt. Col. Anton T. Semelroth, a Defense Department spokesman, said in a statement. “The projects proposed … are in line with this agreement.”

The arrival of V Corps is the latest in a series of efforts to expand operations in Poland, which also hosts a rotational U.S. Army armored brigade and a U.S.-led multinational NATO battlegroup focused on security along Poland’s border with the Russian military exclave of Kaliningrad.

In 2020, the U.S. and Poland ratified a deal that paved the way for more troop rotations and called for Poland to provide infrastructure to support incoming personnel.

The Army also is gearing up for an influx of combat gear to be stockpiled in the country. U.S. Army Europe and Africa said Thursday that it expects work on a long-planned $360 million warehouse project, much of which is funded by NATO, to be completed by 2022. The site, located in Powidz, will be fully mission capable by 2024.

Once complete, about 85 tanks, 190 armored combat vehicles, 35 artillery and 4 armored vehicle launched bridges will be housed at Powidz, the Army said.

Over the last several years, the Army has been setting up such prepositioned weapons sites at locations across Europe so that troops arriving from the U.S. would have quick access to gear should they be mobilized in a crisis.

V Corps was activated in February 2020 to eventually take over command oversight of Army operations up and down NATO’s eastern flank, where allies have stepped up military activities amid concerns about potential Russian aggression. The headquarters, which was inactivated in 2013 as part of a long post-Cold War drawdown in Europe, is expected to become fully operational in a matter of weeks.

With a main headquarters in Fort Knox, Ky., V Corps has about 200 soldiers rotating to Poznan to support operations.