FORT BRAGG (Tribune News Service) — After nearly two decades of war in Afghanistan, the last boots on the ground there belonged to the commander of the 82nd Airborne Division commander. And less than two days after the U.S. withdrawal from the country, the spouses of the division received a visit from the sergeant major of the Army.

A brigade, battalion and the 82nd Airborne Divison’s commander, Maj. Gen. Christopher Donahue, were called upon in August to assist with evacuating Americans from the country, where troops have spent nearly two decades since shortly after 9/11.

The troops from the 82nd Airborne Division are part of the Immediate Response Force, which rapidly deploys on short or no-notice deployments.

The latest deployment has been the third for the local Fort Bragg force in less than 18 months.

That is why Sgt. Maj. Of the Army Michael Grinston visited Fort Bragg on Wednesday, to thank the spouses who have supported their soldiers in the deployments.

In addition to thanking the spouses, Grinston said he also asked for feedback on how the Department of the Army can better support Fort Bragg military families.

With a list to take back with him, he said one of the things that was discussed was spouses who have coped with juggling childcare and medical appointments in the midst of COVID-19.

Some of the spouses, he said, did not have time to make childcare arrangements and are under the impression they are being asked to not bring their child with them to medical appointments.

Grinston said it’s a point he’ll discuss with the surgeon general of the Army to determine if the deployment would exempt the spouse from the request.

Childcare wasn’t the only topic brought up.

All the deployed paratroopers will see a behavioral health specialist while in the theater before returning to Fort Bragg and once again when they arrive back home, Grinston said.

He said there’s a deliberate plan to support the soldiers currently, and he said he is confident in the behavioral plan at Fort Bragg that is supported by the 18th Airborne Corps command team that the 82nd Airborne Division falls under.

At the same time, Grinston said, leaders should be attuned to whether or not help is needed past the immediate evaluations.

In reflecting on the role the division had in the latest mission, Grinston said it’s a historic part of the 82nd Airborne Division’s legacy.

“We just couldn’t be more proud of how they executed it; but I’m going to be honest, even that mission came at a loss, and we want no losses, and that’s hard,” Grinston said. “But I think because of the 82nd, we saved a lot of lives, because they were there, and I think that’s in the history of the 82nd. They need to be proud of that.”

Grinston commended Alena Knauss, the spouse of Fort Bragg soldier Staff Sgt. Ryan Knauss, who was one of 13 servicemembers do die in an ISIS-K suicide bombing Aug. 26 in Afghanistan.

“She is talking about the wonderful person that her spouse was — and her composure — we met her at Dover on Sunday, and I was so impressed by her, just what an incredible woman,” he said.

For the local veteran community who served in Afghanistan, Grinston said he understands what it’s like, because he’s also deployed twice to Afghanistan.

He said he asks veterans to reflect on why American troops originally went to Afghanistan, and responds back to say “ Osama Bin Laden planned and facilitated the 9/11 attacks right there in Afghanistan.”

“Did we accomplish that mission? Absolutely. Did it come at a cost? Yes,” he said.

He said he recognizes the deployments will be part of the veterans who spent time there, but reminds them to consider that the U.S. has not had any facilitated attacks coming from Afghanistan during the past 20 years.

“The person that started those attacks and 9/11 is no longer with us, so every soldier did exactly what the country has asked us to do,” Grinston said.

He again thanked the paratroopers, spouses, command team of the 18th Airborne Corps and Fayetteville community on behalf of the secretary of the Army, chief of staff of the Army and himself.

“We are the greatest Army in the world because of the support we get from our communities, like Fayetteville,” Grinston said.

“You’re going there to make a better place for other people around the world, and I don’t think we should stop trying to do that,” he said. 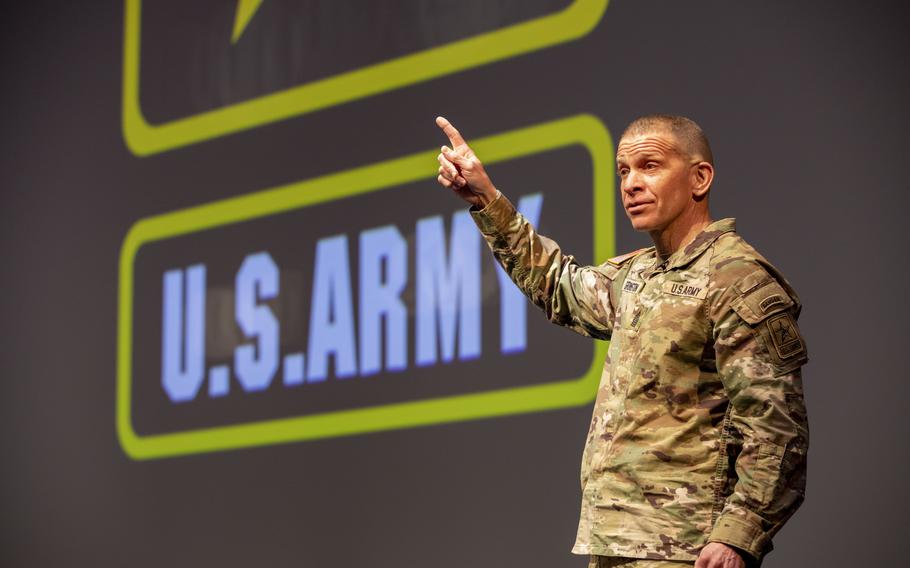