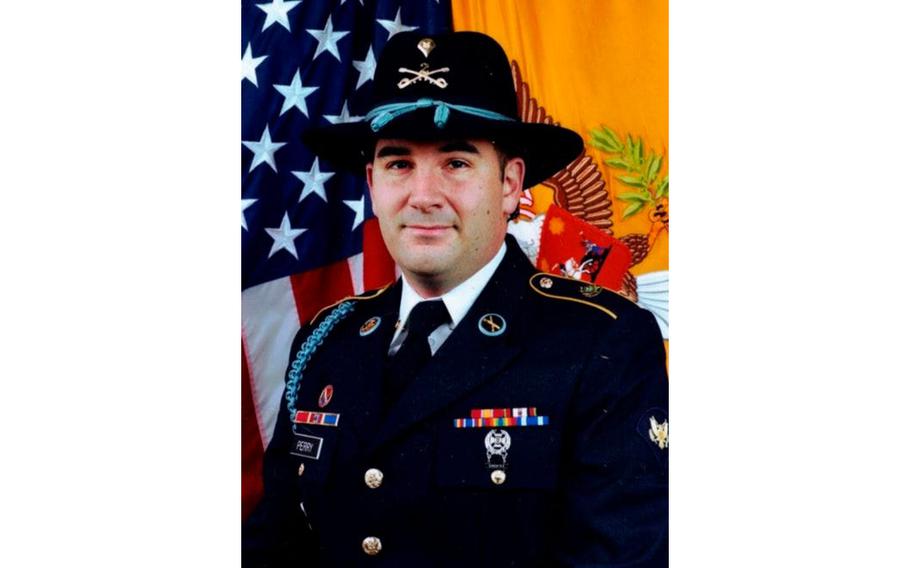 Daniel Perry shot Garrett Foster in the middle of a Black Lives Matter protest on July 25 in downtown Austin. His attorney said he fired in self-defense. (Broden & Mickelsen Law Firm/TNS)

(Tribune News Service) — The case against a driver and U.S. Army sergeant charged with killing a Black Lives Matter protester and Air Force veteran in Austin will continue after a state district judge on Wednesday disagreed with the defense's allegations of prosecutorial misconduct and denied a motion to dismiss.

Sgt. Daniel Perry, who was indicted by a Travis County grand jury this summer on charges of murder, aggravated assault and deadly conduct, has said that he acted in self-defense when he shot and killed Garrett Foster a year ago in downtown Austin.

Since the indictment, Perry's attorney has filed several motions accusing District Attorney José Garza of manipulating the grand jury system. Austin police Detective David Fugitt, who determined that the shooting was justified, has said that prosecutors instructed him to dramatically scale down his grand jury presentation of his evidence in the case involving Daniel Perry.

When Fugitt asked prosecutors if he would face any ramifications if he did not edit his presentation, they resent him an email simply reaffirming the subjects he was not allowed to mention in his testimony.

That was "when the conduct of the district attorney's office went from highly unethical behavior to criminal behavior," Fugitt wrote in an affidavit Monday.

"Reading (Fugitt's) affidavit on its face, I do not find anything to be legally or criminally coercive," Brown said.

By law, prosecutors do not have an obligation to present favorable evidence to a grand jury, Brown said. Dismissing an indictment would require "egregious conduct," and Brown saw nothing that rose to that level.

"I am not prepared to jump across the chasm with you that (prosecutors) have engaged in some criminal conduct," Brown said.

Brown said he knows Fugitt and "holds him in the highest regard," but added that Fugitt was only one witness for the grand jury.

Travis County district attorney prosecutors have made this point as well. Fugitt only knows what he presented to the grand jury — he doesn't know what evidence was presented outside his testimony.

After Brown denied Perry's motion to dismiss his indictment, Brown also ordered that minutes of the grand jury testimony be turned over to defense. In July, prosecutors authored an order that would grant Perry access to all grand jury transcripts and exhibits, as long as a judge allowed it.

The shooting happened July 25, 2020, on Congress Avenue where Perry, moonlighting as a ride-hailing driver, encountered a Black Lives Matter march underway and tried to navigate through it.

Foster — who was legally carrying an assault rifle — approached Perry's car. Perry told investigators Foster raised his weapon at him, and that's when Perry fired.

Foster also had a military background. He enlisted in the U.S. Air Force and worked as a flight mechanic until he was 19, when he was discharged to be the full-time caretaker for his girlfriend, who is a quadruple amputee.

Part of the evidence Fugitt was asked not to share included details that some of the witnesses who said Foster did not raise his AK-47 assault rifle toward Perry also admitted that they were not in a position to witness Foster's actions, according to a court filing from Perry's lawyer.

Additionally, prosecutors asked Fugitt to remove some statements from his presentation in which he pointed out that a woman in the crowd "never suggested that Daniel Perry intentionally ... threatened her with imminent bodily injury" when he drove his car through the crowd of protesters, which is the basis for his deadly conduct charge.

Perry's attorney, Clint Broden, said he was disappointed by Brown's decision, but understands the prosecutors are not obligated to present all evidence to a grand jury.

"This certainly does not excuse Mr. Garza's actions," Broden said. "Judge Brown has also agreed to allow us to present additional evidence, if the Texas Rangers conduct a review of Jose Garza's politically motivated actions in this case."