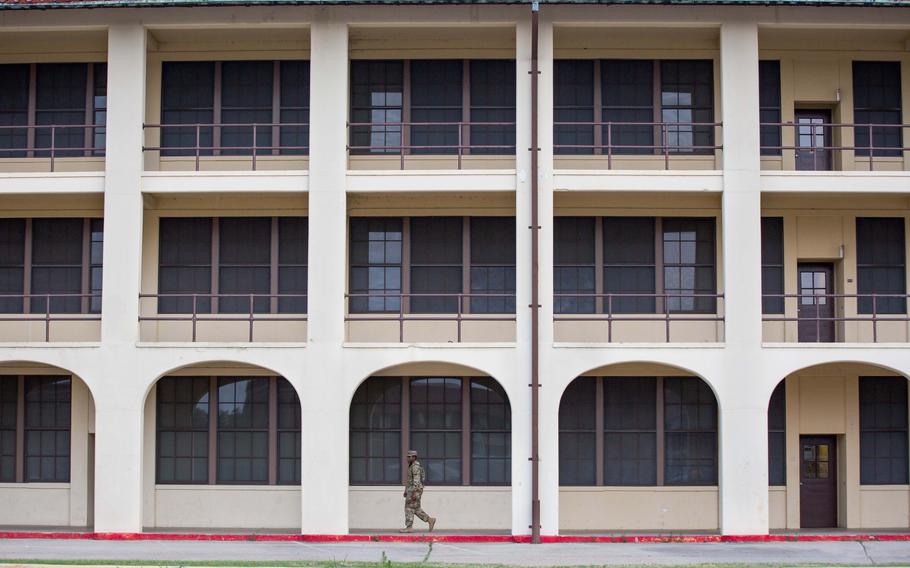 A soldier walks through the barracks at Fort Benning, Ga., where Pvt. Felix Hall lived before his death in 1941. (Kevin D. Liles/for The Washington Post)

FORT BENNING, Ga. — Felix Hall was 18 years old when he left home in Millbrook, Ala., to join other young men preparing to serve in World War II. But instead of fighting in the Pacific, as his all-Black regiment would do with distinction, the Army private was abducted, bound at the hands and ankles and lynched in a wooded ravine.

His killers were never brought to justice.

On Tuesday, more than 80 years after Hall’s death, officials at Fort Benning will unveil a memorial honoring his life and service, and formally acknowledge the act of racial violence that happened on base and under the Army’s watch. The memorial plaque — and its affirmation that this and similar crimes eventually moved President Harry S. Truman to desegregate the armed forces — will be placed at the site where Hall was last seen alive.

A separate marker will be installed in the woods where Hall’s corpse was discovered six weeks after his disappearance.

“To be lynched as you’re in service to the United States Army?” said Richard Liebert, a retired Army officer who trained at Fort Benning in the 1970s and ‘80s. Liebert, who is white, has for the past five years pressed the Army to recognize this young soldier whose life was stolen from him — not by an enemy abroad, but by hatred at home. “It just goes right to the core of my being as so wrong,” he said, “and just so unjust.”

The dedication of Hall’s memorial comes as Fort Benning, one of 10 Army posts named after Confederate soldiers, remains a flash point in the broader national debate over America’s history of slavery and systemic racism; the military’s long, contentious embrace of such figures and symbols; and mounting pressure from lawmakers and others to rid its ranks of white supremacists. Congress has directed the Defense Department to rename these facilities by early 2024.

“This memorial,” Bishop’s statement said, “reminds us of our duty to assure equality and justice for all those who follow in Pvt. Hall’s footsteps in service to our nation.”

While historians have long highlighted the injustice Hall suffered decades ago, it wasn’t until last summer, after George Floyd’s killing at the hands of a Minneapolis police officer and the ensuing demonstrations by millions throughout the country protesting hate and inequity, that plans for the memorial began to take shape. 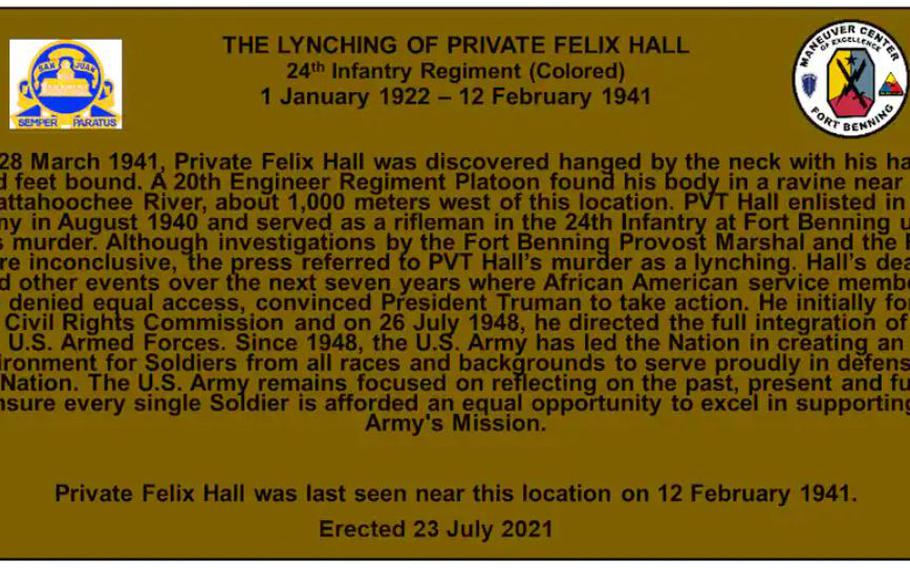 A digital mock-up of the plaque recognizing Felix Hall, to be unveiled Tuesday at Fort Benning, Ga. (U.S. Army)

A spokesman for Fort Benning declined to comment ahead of Tuesday’s ceremony, though base officials shared a mock-up of the plaque. It says that, since 1948 when Truman ordered full integration of the military, the Army has “led the Nation in creating an environment for Soldiers from all races and backgrounds to serve proudly in defense of our Nation,” and that the service “remains focused on reflecting on the past, present and future to ensure every single Soldier is afforded an equal opportunity to excel in supporting the Army’s Mission.”

It stops short of labeling Hall’s death a hate crime, noting that investigations by local military authorities and the FBI were “inconclusive.”

As The Washington Post reported in 2016, federal investigators did identify potential suspects, all of them white, though none were ever charged. An FBI report that is available to the public remains significantly redacted, with two key paragraphs that likely detail a top suspect’s motive obscured. The bureau declined to lift specific redactions in 2016 when The Post published its investigation into Hall’s murder, citing privacy exemptions. Earlier this year, it declined a request to lift all redactions in the report.

According to Northeastern University Law School’s Civil Rights and Restorative Justice project — which built an archive of more than 1,100 racially motivated homicides that occurred during the Jim Crow era and was first to unearth the FBI file on Hall — at least 28 active-duty African American soldiers were killed in the United States during the World War II era.

During the six weeks that Hall’s body hung in the woods, a white military police officer at Fort Benning shot and killed another Black soldier, Pvt. Albert King. Within 13 hours of King’s death, base authorities held a trial and exonerated his killer. Working with the Civil Rights and Restorative Justice Project, attorneys from the firm Morgan Lewis in June petitioned the Army on behalf of King’s closest known living relative to update his service record to say he died in the line of duty. The Army’s Board for Correction of Military Records has acknowledged it is evaluating the request, the law firm said.

Had these men not been targeted and killed at Fort Benning, they most likely would have completed their military training and deployed to the Pacific. Hall’s unit, the 24th Infantry Regiment, departed in the spring of 1942, and Army officials later recognized these soldiers’ contributions as “well worthy of emulation and praise.”

Jesse Windsor, who, like Hall left rural Alabama and joined the 24th Infantry Regiment at Fort Benning, survived his military service, dying this past winter at age 97. His son, Thomas Windsor, said that after the war, his dad left the South and made a life in Connecticut. He got married, had two kids, and eventually became a grandfather.

Thomas Windsor was moved by his father’s war stories and, a few years ago, they traveled together to Washington with the Honor Flight Network, an organization that brings the nation’s oldest veterans to the capital so they can experience the memorials built in their honor. He watched his father hold court with schoolchildren full of questions, and as fellow veterans — white men in their 80s and 90s — approached their comrade to apologize.

Army veteran Kenneth Thomas, 31, shares a personal connection to Hall — his late grandfather was Hall’s younger cousin — and often reflects on what happened to him.

Thomas said he sees racism as ubiquitous in the United States — a poison that extends into every neighborhood and field of work. “If that happened to Felix, I felt like that could happen to me, and it could happen to my kids,” he said.

Thomas, who joined the service at 19 and pulled a tour in Afghanistan, grew up with Hall’s story. His grandfather, Judge Hall, would often recount how he overslept the morning his cousin left home for the last time — and the heartache he carried for the rest of his life having never said goodbye.

“He felt so bad, and he never got any closure,” Thomas said. “He never forgave himself. He always thought he could have done something to save Felix.”

Thomas said he wished his grandfather was alive to see the memorial dedicated. The justice he wishes for, at this point, is a country that acknowledges its history, punishes those who commit such crimes and eradicates racial violence.

The Washington Post’s Alice Crites in Washington contributed to this report.