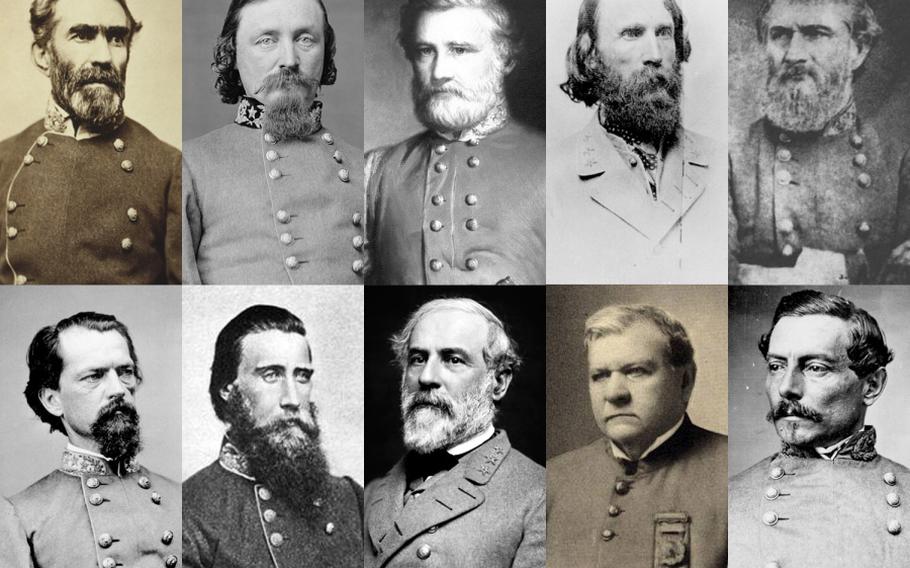 WASHINGTON – The leader of a congressionally mandated commission ordered to examine the renaming of Defense Department assets that honor the Confederacy said Friday that the group is still working on criteria for the process and a decision on what names need to change will not be made until October 2022.

The eight commissioners, appointed in February, have until October 2022 to develop procedures, nominate assets to be renamed and suggest new names, said retired Navy Adm. Michelle Howard, the commission’s chairwoman.

So far, the group has identified 10 installations to consider renaming and are working on the renaming criteria before meeting with leaders at candidate bases in the coming months.

The bases in question, all in former Confederate states, were named during the 1910s and 1940s amid the south’s Jim Crow era. They are Fort Polk in Louisiana, Fort Benning and Fort Gordon in Georgia, Fort Bragg in North Carolina, Fort A.P. Hill, Fort Lee and Fort Pickett in Virginia, Fort Rucker in Alabama, and Fort Hood in Texas.

Howard said the commission will also consider Fort Belvoir in Virginia, which was named after Union Army Gen. Andrew A. Humphreys from 1917-1935 before it was renamed in 1935 after the family who owned the plantation on which the installation now sits.

Congress mandated the commission in the 2021 National Defense Authorization Act, which sets annual spending and policy priorities for the Defense Department, as Army and Pentagon leaders began looking at stripping bases of Confederate-linked names last year amid a nationwide racial reckoning after the Memorial Day killing of George Floyd by Minneapolis police.

But it’s not just military bases that are eligible for change. The congressional mandate requires all Defense Department assets named to honor the Confederate States of America – from ships and buildings to streets and facilities – to be renamed, Howard said.

“We understand, based on the extensiveness of the assets, this is going to take some time,” she said Friday. “The commission was built out over a lengthy timeframe up until October ‘22, giving us time to account from local sensibilities [and] work our way through what potentially could be a big inventory list.”

The commission plans to first visit the U.S. Naval Academy in Annapolis, Md., and the U.S. Military Academy in West Point, N.Y., where they will “meet with local stakeholders to develop procedures and criteria that incorporate local sensitivities to renaming these assets,” Howard said.

Though Howard did not name specific assets on the academies' campuses for review, two buildings and one road at the naval academy are named after senior officers in the Confederate navy, and a gate and barracks building at West Point are named after Confederate general Robert E. Lee.

While most of those Army bases are named after Confederate generals from the Civil War, the commission is looking at all assets with possible ties to the Confederacy. To do so, Howard said the group must study the historical context behind each asset’s naming.

For example, Howard said the commission plans to research the intention of the naming of the guided-missile cruiser USS Antietam, which commemorates the Sept. 17, 1862, Civil War battle in Maryland.

“It depends on whether or not you see Antietam as a Union victory. Does it honor the Confederacy in any way?” Howard said. “So, that needs more exploration behind why what the ship was named.”

After the commission submits its report in October 2022, the Pentagon will have until Jan. 1, 2024, to implement the changes, according to the 2021 NDAA.