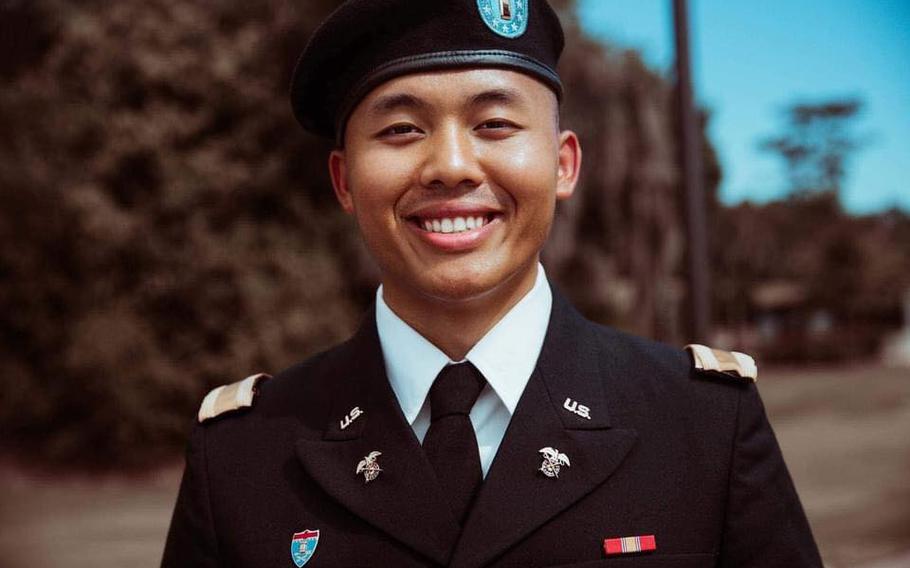 TACOMA, Wash. (Tribune News Service) — Wennicha Yang remembers feeling nervous when she transferred to a new school in fifth grade. But she also remembers how her younger brother, Army 1st Lt. Brian Yang, helped her get through that feeling.

“I was like, ‘Wow I don’t know anybody here. I don’t have any friends,’ and Brian was like, ‘That’s OK, you can follow me around,’” Wennicha said. “That’s what I love about Brian.”

Wennicha, 26, is from Saint Paul, Minnesota. She is one of Brian’s older siblings. Brian was the 25-year-old Army soldier who was found dead near Mount St. Helens on Wednesday, July 21.

He was last seen Sunday, July 18 at the South Coldwater Trailhead. The Cowlitz County Sheriff’s Office and Joint Base Lewis-McChord members searched for him. Hikers found his body three days later at the bottom of a steep embankment.

The day after he was found, Wennicha, her father and older brother walked the trail leading up to Mount Whittier — the last trail Brian hiked. Wennicha said in her family’s religion, it is important to return and visit the same spot where a loved one experienced an accident.

Wennicha and her family stopped at 4.5 miles, which was 6 miles away from where Brian was found. The trail was long and dangerous, she said, so they decided to perform the spiritual ceremony where they had stopped.

As Wennicha’s father burned incense sticks during the ceremony, she said she felt Brian’s spirit. Butterflies also flew around them during the same time, and in her family’s culture, they believe that their ancestors came back to them as insects.

“A lot of Hmong Animists are really intuitive,” Wennicha said. “I felt his energy like he was still a young kid ... he came and he was so happy to see us. I truly believe that we freed his spirit.”

Brian and his four siblings were born and raised in Saint Paul, Minnesota. He was born on June 12, 1996, and is the fourth oldest. He was born after Wennicha.

Wennicha said she and Brian always hung out together when they were young. They would watch movies and play together. There were times when they would build forts and hide under a shelf so monsters could not reach them, she said.

The Yang siblings attended Harding High School, and Brian graduated in 2014. After graduating high school, Brian received his bachelor’s degree from Brown University in 2018. He double-majored in medical anthropology and international public health.

When Brian studied in college, he visited several places abroad, Wennicha said. Costa Rica, Vietnam and Madagascar were among the places he visited. The last place he traveled to was Laos, which is where he centered the topic of his thesis on.

Wennicha said Brian dreamed of becoming a surgeon who traveled around the world. He wanted to care for families and children who lived in developing countries, she said.

Before Brian joined the Army, he considered pursuing graduate school, Wennicha said. He got accepted to the school he applied for, but he wanted to feel challenged and learn how to become a better leader. So he decided to join the Army instead.

“He believed that the Army would teach him how to be a good leader and how to work with people from different backgrounds,” Wennicha said.

In fall 2018, Brian went to South Carolina for basic training. He then went to Georgia in spring 2019 to attend Officer Candidate School. He finally moved to Washington in fall 2019, where he was tasked to train new cadets.

Aside from traveling, Brian’s hobbies include running marathons, Wennicha said. In 2020, he participated in a 52-mile ultramarathon in Oregon, which had an elevation gain of 7,300 feet.

“Brian has always done what he loved,” Wennicha said. “He did what made him feel alive.”

Brian was supposed to start his new role as an executive officer on July 19, which is the day after he was last seen, Wennicha said. He was also supposed to participate in a race at Mount St. Helens in August, which a friend of Brian’s will run in honor of him.

Wennicha recalls one of her last conversations with Brian — it was about the afterlife. She told him she has an idea of what happens after someone passes, but either way, she said she is sure that they will both find their way to each other.

“I absolutely believe that Brian is still here,” Wennicha said. “He’s watching over us.”

Those who want to support Brian’s family can make donations through Venmo, which will go towards funeral arrangements. A memorial for Brian is scheduled at 3 p.m. Wednesday, July 28 at JBLM’s North Chapel.

“He is a courageous person, and he lived his life courageously,” Wennicha said. “He did what he loved, and he died doing something that he loved.”