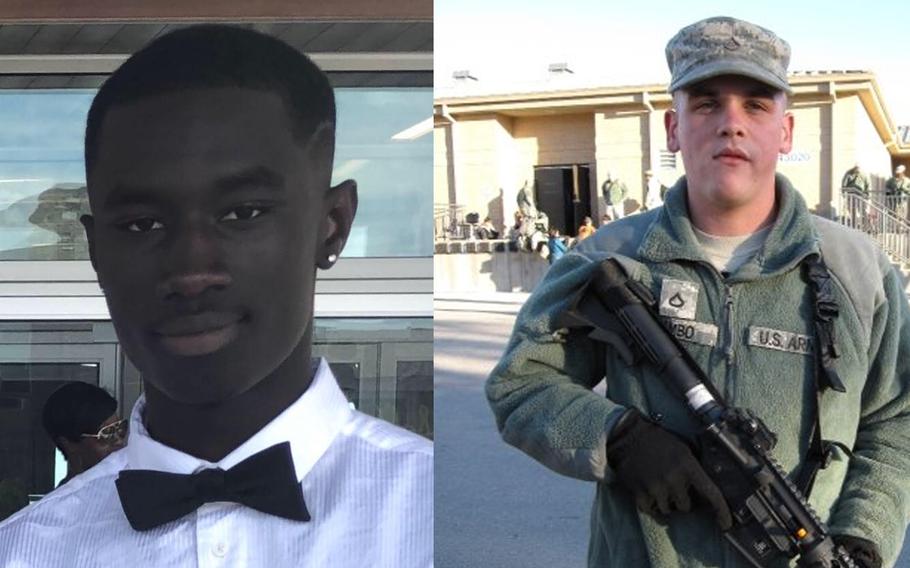 Spc. Malvin Kyei-Baffour, left, and Sgt. 1st Class Keith A. Rambo, right, died when their car caught fire after hitting the wreckage of another car crash on July 18 on Loop 375 near Iron Medics Drive in East El Paso, Texas. (Facebook)

A third soldier injured in the traffic accident is hospitalized in stable condition and recovering, a Fort Bliss news release stated Wednesday.

“Sgt. 1st Class Rambo was a pivotal member of our team and an exemplary noncommissioned officer. Due to his perseverance and resiliency, he was essentially the platoon sergeant for the entire battalion, not simply Bravo Company,” Lt. Col. Rian Carter, commander of the 47th Brigade Support Battalion, 2nd Armored Brigade Combat Team, said in a statement.

“He always focused on the welfare, training, and quality of life of his soldiers and his charismatic personality will be sorely missed,” Carter said.

Rambo joined the U.S. Army in 2007 in Muskegon, Michigan, according to information from Fort Bliss.

He also served as a recruiter in Flint, Michigan, and Knoxville, Tennessee, before arriving at Fort Bliss in July 2020.

Fort Bliss was the first duty station for Kyei-Baffour, who joined the U.S. Army in Dallas in 2019.

Kyei-Baffour was originally from Ghana and was from Red Oak, Texas, a Fort Bliss news release stated.

“We extend our heartfelt condolences to his family and loved ones,” Fox said in a statement. “We care deeply for our soldiers and family members and stand ready to support as we all come together from this tragic loss.”

El Paso police said that the fatal traffic collision occurred about 3:45 a.m. Sunday when a Kia Rio driven by Jhairo Jonathan Ajtun Martinez, 27, veered and crashed into a guardrail.

The crash broke the Kia in half, with the passenger compartment landing on the right lane.

The two deceased soldiers were the driver and front-seat passenger in a Dodge Charger that struck the Kia passenger compartment wreckage on the roadway, police said.

After hitting the debris, the Dodge continued for several hundred feet before crashing and catching fire, police said. The two soldiers died trapped in the fiery wreck.

Backseat passenger Ruby Navarrete, 21, was ejected from the car during the crash, police said.

The other backseat passenger, Luis Aneudy Velasquez, 35, was pulled from the burning car by three good Samaritans, police said.

Martinez, Velasquez and Navarrete were all taken to hospitals with serious injuries.