The names of the soldiers who died have not been disclosed pending positive identification, police officials said Monday.

The collision occurred about 3:45 a.m. Sunday on the northbound lanes of Loop 375 near Iron Medics Drive near the new William Beaumont Army Medical Center.

According to a police news release, a 2020 Kia Rio driven by Jhairo Jonathan Ajtun Martinez, 27, veered right and crashed into a guardrail, splitting the car in half, with the passenger compartment landing on the right lane.

A 2021 Dodge Charger was “traveling at a high rate of speed” when it struck the Kia passenger compartment wreckage on the roadway, police said.

The Dodge continued for several hundred feet before crashing and catching fire by the Iron Medics on-ramp.

The two male soldiers who died were the driver and front seat passenger in the Dodge Charger, police said. Two passengers in the back seats were identified as Luis Aneudy Velasquez, 35, and Ruby Navarrete, 21.

Navarrete was ejected from the car during the crash, police said.

Police said that three unidentified men stopped to help and pulled Velasquez from the rear of the burning car, but the driver and front-seat passenger were trapped and died in the fire.

Martinez, Velasquez and Navarrete were all taken to hospitals with serious injuries. Fort Bliss reported that one of the injured is also a soldier.

A photo shared by the Texas Department of Transportation showed a pair of vehicle seats several yards into the desert.

An investigation into the Loop 375 crash by the Special Traffic Investigations Unit continues. There have now been 35 traffic-related deaths this year, compared with 44 at this time last year. 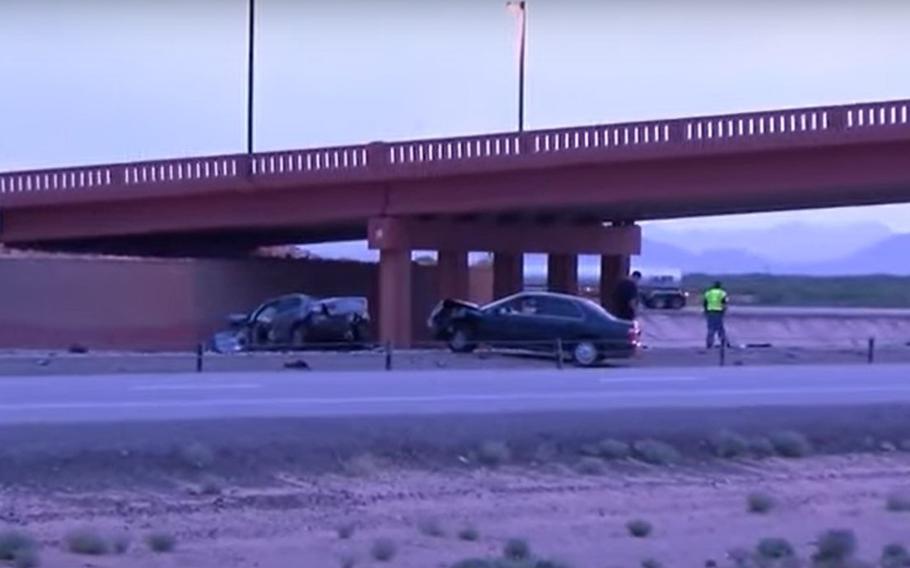