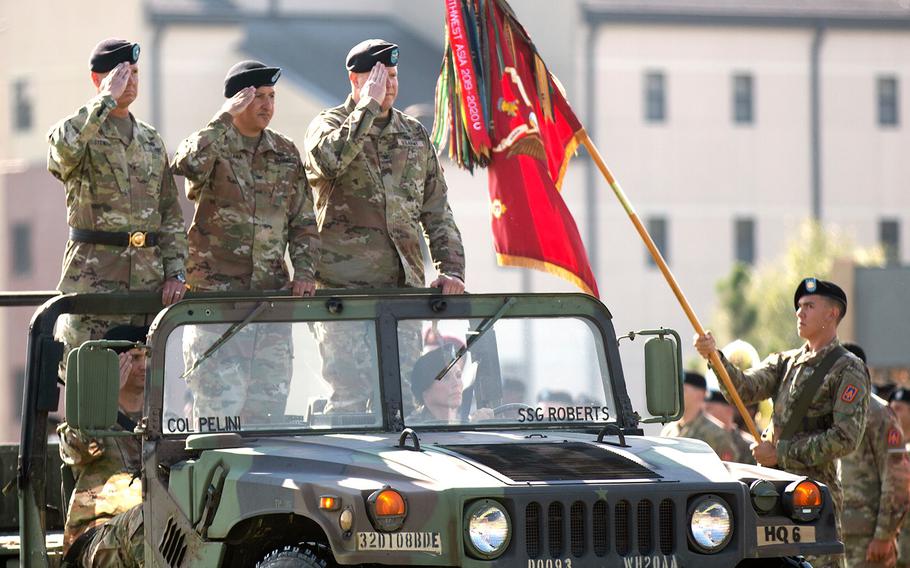 Matallana is headed to Maxwell Air Force Base, Ala., to become an instructor for the U.S. Air War College Pelini arrives from the division chief for capabilities and requirements at the Army’s Joint Counter-Unmanned Aircraft Systems Office.

Matallana was thanked by Brig Gen. David Stewart, commander of the 32nd Army Air and Missile Command, for leading the brigade during its deployment to the Middle East last year.

Stewart was the reviewing officer for the command change.

During Tuesday’s ceremony, he said that Matallana led five battalions while deployed, with his command spanning across nine countries that included Iraq, Jordan, Saudi Arabia, Afghanistan, Syria and others.

“As only Chuck is capable, he skillfully led his team and navigated the complexity of the environment with an evolving and active enemy while adeptly advising and informing multiple joint force senior leaders,” Stewart said. 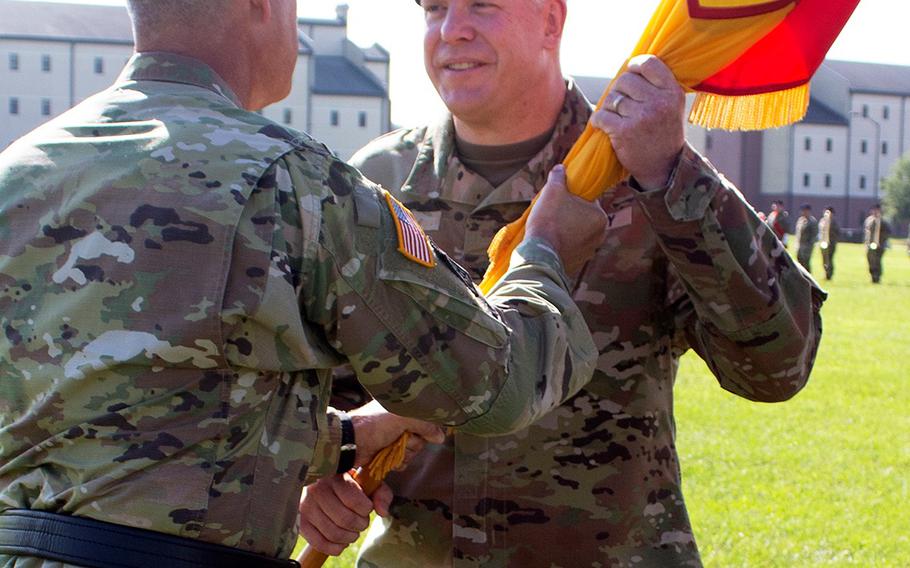 The soldiers of the brigade activated as the global response force and sent additional batteries within two weeks of activation. Each contributed to reestablishing counter rocket artillery and border protection in Iraq, while also maintaining mission command and protection in Afghanistan, Matallana said.

“I’m proud of the fact that these soldiers were collectively recognized down to the battalion level with the awarding of the Meritorious Unit Commendation for their tireless efforts protecting the force and critical assets from Iranian aggression,” he said.

He said the past two years he’s spent with the brigade have been remarkable, as its soldiers added “significant contributions to the rich legacy” of the brigade “answering the call to do their mission in a period of increased hostility” in the U.S. Central Command region.

He told Pelini that he is “inheriting an awesome team of professionals.”

Pelini thanked Matallana for balancing calmness with technical and tactical expertise while leading the brigade overseas.

He said he told the soldiers of the brigade that they have a worldwide reputation “as the varsity team.”

“The work that we will do over the next two years will write the next chapter of this brigade’s operational lineage,” Pelini said. “It will be challenging. However, you are the right soldiers at the right time to take on these challenges, and I know we’ll rise to those demands.”