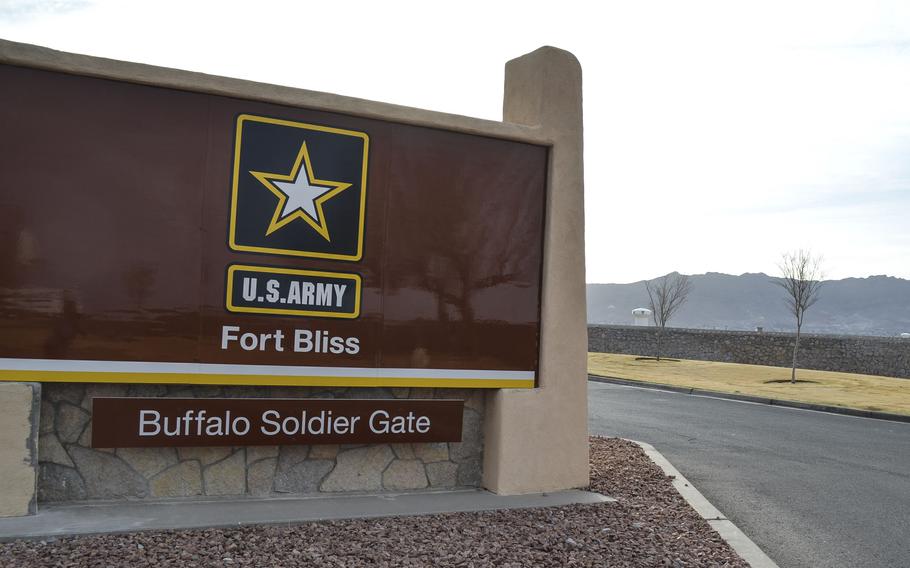 A 20-year-old soldier died Monday after she was found unresponsive in her assigned barracks room at Fort Bliss, Texas, according to base officials.

Pvt. Marriah A. Pouncy of Chinle, Ariz., was pronounced dead later that day by Fort Bliss Department of Emergency Services personnel, base officials said. Army Criminal Investigation Command, known as CID, is investigating the circumstances surrounding her death, though officials said foul play is not suspected and her death is believed to have been an isolated incident.

Pouncy arrived at the Army base in west Texas in December 2019, and she was a human resources specialist assigned to Headquarters and Headquarters Company, 1st Armored Division Combat Aviation Brigade, according to the base.

“Our deepest condolences go out to the family, friends, and fellow soldiers of Pvt. Marriah Pouncy,” Col. Geoffrey Whittenberg, 1st Armored Division Combat Aviation Brigade commander, said in a statement. “Pvt. Pouncy was a committed soldier, friend, and valued member of the [brigade]. Her loss is not just felt within our formation, but across the Army.”

Her death comes about six months after another Fort Bliss soldier who served in the same brigade died under similar circumstances. Pfc. Asia Graham, 19, was found unresponsive in her barracks room on Dec. 31. Earlier this month, base officials said Graham’s death was ruled an accident after she took a drug mixture of fentanyl and synthetic marijuana.

Before her death, Graham had reported she was sexually assaulted. Last week, Pfc. Christian Alvarado was convicted of Graham’s assault and sentenced to 18 years in prison. However, Alvarado, who also served in the combat aviation brigade, was acquitted on additional sexual assault charges.

Pouncy was on the witness list for Alvarado’s court-martial, but she was not called to testify, according to Fort Bliss officials.

Prior to Fort Bliss, Pouncy served a short assignment to Camp Red Cloud and Camp Casey in Korea. She completed basic training and advanced individual training at Fort Jackson, S.C., according to Fort Bliss.

“We ask that during these challenging times that you continue to reach out to your fellow soldiers and families as we grieve the loss of our Iron soldier. Chaplains, behavioral health professionals, and other resources are available to help during this grieving process,” Whittenberg said.