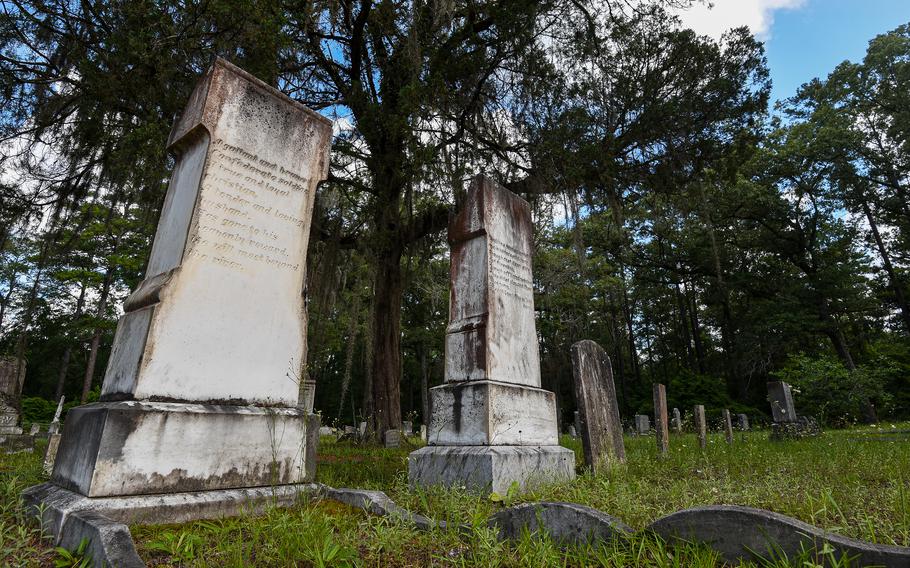 Buy Photo
Grave markers in the Taylor’s Creek cemetery on the Army’s Fort Stewart in Georgia mark the burial site of two Confederate soldiers. The cemetery, one of 60 on the installation, dates back to the 1840s. (Corey Dickstein/Stars and Stripes)

FORT STEWART, Ga. — The headstones in the small cemetery in a wooded lot just off a highway running through the Army’s Fort Stewart date back to the 1840s.

The often-faded grave markers standing amid Spanish moss-covered oaks mark burial sites for dozens of Hendrys and Bradleys, a Lanier and some Shuptrines. Some buried in this plot known as Taylor’s Creek cemetery were members of prominent families, some immigrated from Scotland and others, still, fought for the Confederate States of America in the Civil War.

The headstones tell the stories of the area’s past, long before the Army acquired the 284,000 acres of coastal Georgia grounds in the 1940s to turn into the military installation it is today — the largest U.S. military post by acreage east of the Mississippi River, said Brian Greer, manager of Fort Stewart’s cultural resources program. In all, the 60 cemeteries scattered across the post are the only existing indications of once-thriving communities that first settled the area in the 1730s, Greer said.

“The cemeteries [are] the only visual reminders that we have that there were these bustling communities here on what constitutes Fort Stewart today,” he said. “The home sites, the buildings are all long gone, but we have these cemeteries here, and, obviously, we have to protect and preserve them.”

Taylor’s Creek cemetery is the largest on the post, Greer said. It was once surrounded by a community established in the 1760s that grew from about 80 settlers to more than 300 families. Some descendants of members of those communities are still occasionally buried in the cemeteries on post, Greer said, noting it was a rare occurrence.

Greer, an archaeologist, spent the early part of his career at Fort Stewart in the 1990s documenting all of the more than 2,800 headstones in the cemeteries on the post and four others on Hunter Army Airfield, an extension of Fort Stewart in nearby Savannah. For years, his office worked to survey thousands of potentially historically significant locations to ensure the Army could train without disturbing them. 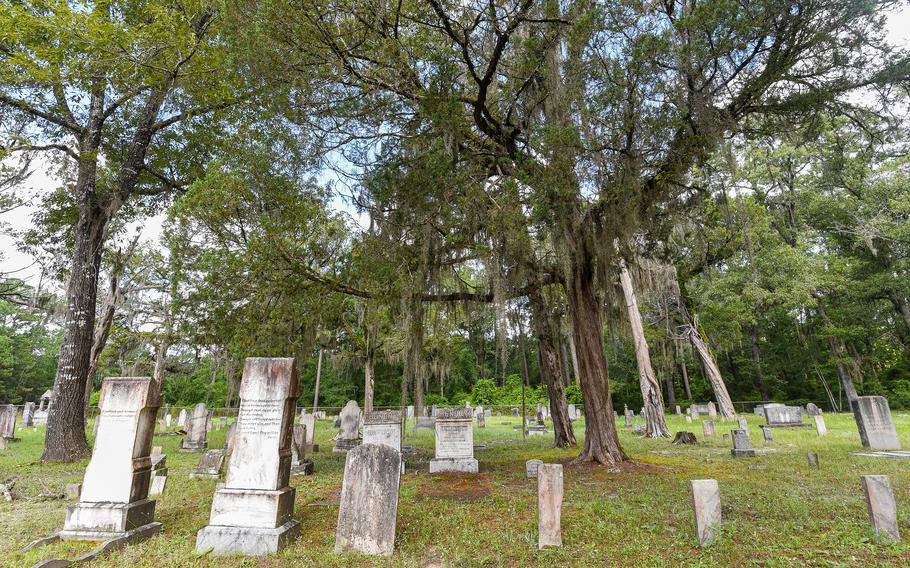 Buy Photo
Headstones in the Taylor’s Creek cemetery on the Army’s Fort Stewart in Georgia are the only remaining indication of a community established on the grounds in the 1700s long before the Army built the post there in the 1940s. Fort Stewart has 60 cemeteries on its 284,000 acres that were established before it was an Army post. (Corey Dickstein/Stars and Stripes) Buy Photo
Headstones in the Taylor’s Creek cemetery on the Army’s Fort Stewart in Georgia are the only remaining indication of a community established on the grounds in the 1700s long before the Army built the post there in the 1940s. Fort Stewart has 60 cemeteries on its 284,000 acres that were established before it was an Army post. The Hendry family, on the grave marker in this June 14, 2021 photo, is among the most common names in the cemetery. (Corey Dickstein/Stars and Stripes)

Today, with more than 95% of the survey work completed, there are few restrictions on training for historical reasons. Most restrictions are because of the cemeteries, Greer said. The Army cannot train within 200 feet of its cemeteries.

The Army maintains the cemetery grounds, but headstones are the responsibility of family members, Greer said, noting that many had fallen or deteriorated over the decades.

“If there’s any kind of damage that’s done by the military — again, a rare occurrence — then the military has gone in and done repairs” to the headstones, Greer said. He said he could not think of a specific incident in which the Army caused serious damage in any of the cemeteries.

He credits military planners with helping ensure the cemeteries remain untouched during operations on post. Greer works directly with commanders and range control officers to ensure soldiers know where the cemeteries are on post and how far they need to stay away from them.

“The soldiers were not really too worried about because they’re trained to recognize areas being off limits,” he said. “And I think there’s generally a universal taboo against damaging cemeteries. The Army certain recognizes that.”