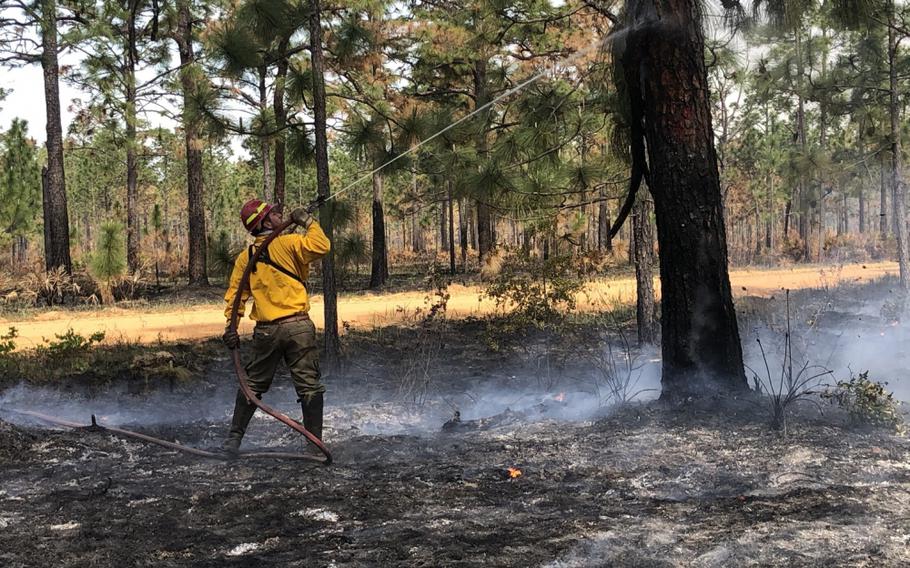 An equipment operator with the Fort Stewart-Hunter Army Airfield Forestry Branch extinguishes a fire at the base of a long leaf pine tree during a controlled burn, April 23 on Fort Stewart, Georgia. (Molly Cooke/Fort Stewart Public Affairs Office)

FORT STEWART, Ga. — For seven months a year, hundreds of acres of this pine-forest- and wetland-covered Army post burn, sending ominous plumes of smoke miles into the sky that can be seen by thousands of Coastal Georgians in nearby communities.

Fort Stewart burns at least 600 acres at a time in a process Army officials call critical for the 3rd Infantry Division and thousands of other service members who train each year on the largest military installation east of the Mississippi River. The prescribed burn program — the largest such controlled burning program on a single land plot in North America, according to the Defense Department — ensures soldiers can train at Fort Stewart without fears of sparking a massive wildfire. The efforts have also proven beneficial to the environment.

“We’re fortunate right here in this part of the country that what the threatened and endangered [animal and plant] species in this area thrive on and need is the same thing that the military needs for training,” said Jeff Mangun, who heads Fort Stewart’s 50-person Forestry Branch.

The installation was recently recognized for its efforts to conserve and protect the woodlands, wetlands and wildlife on its 284,000 acres in coastal southeast Georgia. Fort Stewart in April received the Secretary of the Army’s Environmental Award for Natural Resources Conservation for a Large Installation for its efforts in 2019 and 2020.

The award recognizes multiple programs across the post, from Mangun’s forestry efforts to wildlife conservation activities to protect endangered and threatened species indigenous to Fort Stewart’s grounds. The post also works to protect and maintain culturally significant sites on the installation, namely 60 cemeteries that date back to the early 1800s. 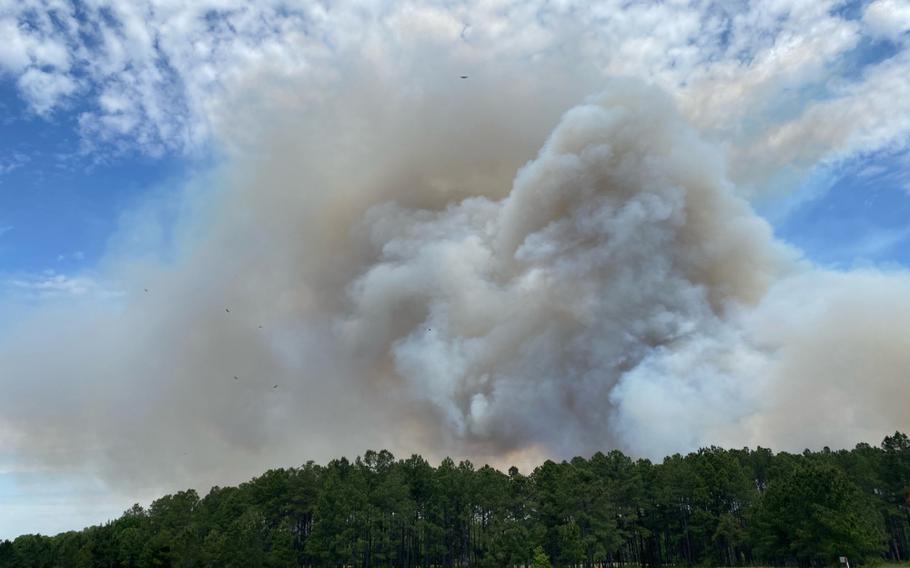 “Most of the public doesn’t realize that we have biologists, we have environmental management, we have archaeologists on our staff,” said Logan, who relinquished garrison command of Fort Stewart and Hunter Army Airfield in nearby Savannah this week after two years at the helm. “They don’t just assist the Army, they are a part of the Army, and that’s what makes us successful.”

On a muggy June day on the northern side of Fort Stewart’s pine-pocked training grounds, Mangun pointed out burn marks reaching well over 6 feet high on the long-leaf pines lining a dirt tank trail.

The patch of ground had been burned in February. Already, brush was starting to creep up, some of it nearing knee-height, but the area was devoid of any trees or other vegetation in the 10- to 20-foot-tall range, keeping the grounds clear for soldiers to easily trudge through.

On this day, June 14, officials were not burning. The area had received too much rain in previous days, Mangun said. If the conditions are not right on a given day, the post does not burn. It means Forest Stewart’s forestry officials spend mornings checking the weather to make sure the conditions are just right — clear skies, low chances of precipitation and low wind to keep smoke, as much as possible, from drifting over training ranges and into Fort Stewart’s garrison area and neighboring communities.

On days when Fort Stewart does burn, Mangun’s team follows a meticulous process. Foresters spend the morning tweaking plans and ensuring that fires are away from areas soldiers are operating. On the ground, they use a truck-mounted blowtorch to start burns along the outer edges of the ranges selected on that day. 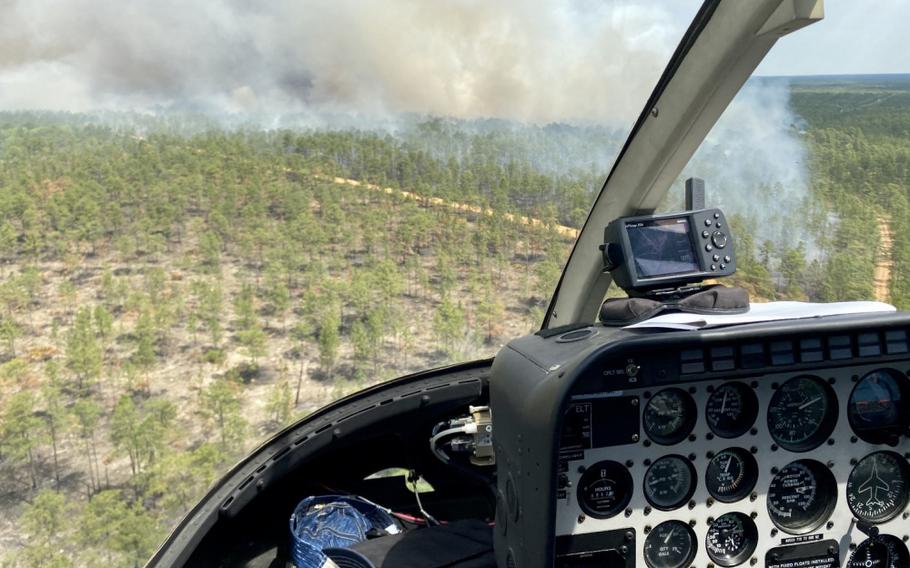 The rest of the fire comes from the air.

The installation contracts a civilian-owned helicopter from which it drops aerial ignition devices, known colloquially as pingpong balls, which contain chemicals that produce small fires when they reach the ground. The helicopter, Mangun said, flies across the plot to be burned in a crisscross pattern, setting a low-intensity controlled burn. When the fire burns up the fuel on the ground, it goes out.

The helicopter can light about 500 acres in 10 to 15 minutes, he said. The fires typically last two to three hours.

Soldiers can train on a plot of training ground as soon as the next day after a burn, he said. And they can do so with little risk of sparking an out-of-control wildfire with a tracer round or other pyrotechnics.

“A soldier can go out all he wants to try to start a fire — if you tried to start a fire, you could go out and pour gasoline out there, and you’re not going to get these woods to burn up,” Mangun said. “It still happens, of course. But when it does happen, the fire goes out right away and soldiers just keep right on training.”

The efforts pay off. Fort Stewart has not lost a day of training for soldiers due to wildfire in two decades. That was not always the case. Mangun recalled a fire sparked in the late 1990s by an explosion in Fort Stewart’s impact zone that quickly spread, forcing soldiers out of training locations during a field exercise. In fact, when Mangun arrived at Fort Stewart in 1994 the post was averaging 200 to 500 wildfires per year ignited often by soldiers and sometimes by lightning. In recent years, less than 30 wildfires have been sparked annually, he said. 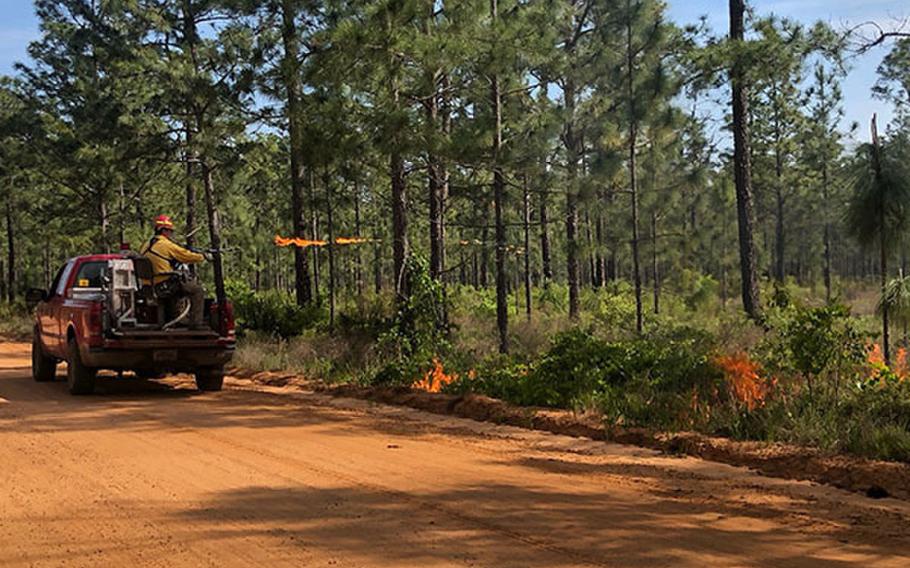 Wildfires in the western United States have regularly captured news headlines in recent years as record heat and drought conditions spark fast-moving blazes that burn tens of thousands of acres at a time. In 2021, more than 29,000 fires have burned up more than 1.1 million acres across the United States, according to National Interagency Fire Center data. It marks the most wildfires in the first six months of any year since 2011.

The southeastern United States is not immune from such fires. Last year, almost 1,700 wildfires burned more than 5,600 acres in Georgia, the data shows. Meanwhile, a 2018 study by the U.S. Global Change Research Program predicted wildfires sparked by lightning strikes in the U.S. southeast would increase by 30% by 2060, occurring more frequently and burning more land.

The long-standing burning program on Fort Stewart should continue to mitigate increased fire risk due to climate change, Mangun said.

But he also credited another forestry practice at Fort Stewart with limiting wildfire destruction — timber thinning.

Each year, Fort Stewart thins 3,000 to 5,000 acres of timber on its grounds, which helps with fire prevention and is also required for Army training. He pointed out the long-leaf pines along the Fort Stewart tank trail, spread wide enough apart — often 10 to 15 feet — to drive most Army vehicles between.

“We thin to the Army training specs, so the military can come out here and train unimpeded,” he said. “If you knew what southeast Georgia would look like without timber thinning or prescribed burning, you may not be able to see 15 or 20 feet in through these woods.”

Fort Stewart sells $3 million of lumber removed from its grounds annually. Those funds are then recycled into the Army forestry programs at Fort Stewart and dozens of other installations across the country. 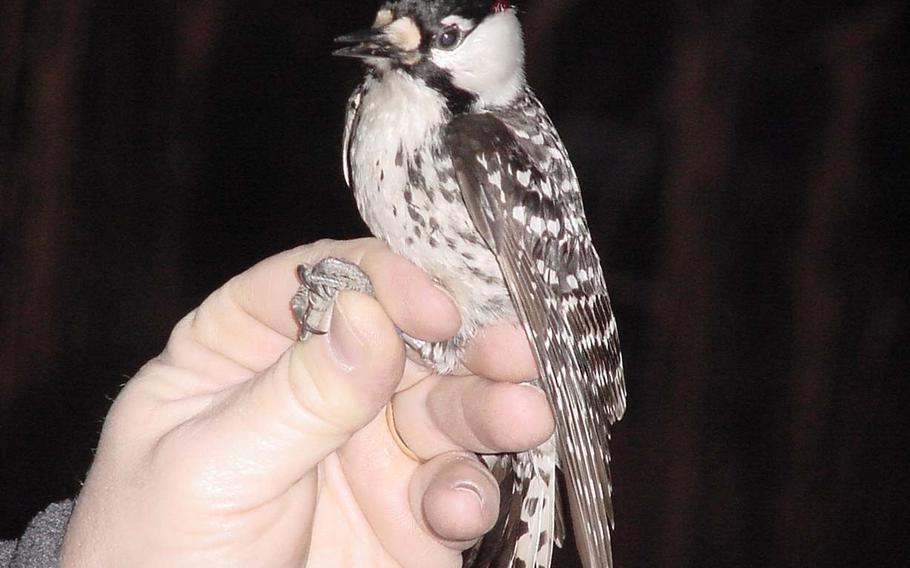 The red-cockaded woodpecker has thrived at Fort Stewart, according to Larry Carlile, chief of the Fish and Wildlife Branch at the installation. (Fort Stewart)

The other benefits are to the environment.

“We’re actually making the forest healthier by thinning it,” Mangun said. “It’s better for the long-leaf pines we have here, and I would say it is better for our threatened and endangered species support programs.”

The most prominent among those rare species at Fort Stewart is the red-cockaded woodpecker, a tiny bird that makes its home in living long-leaf pine trees across the southern United States. It has thrived at Fort Stewart, according to Larry Carlile, chief of the Fish and Wildlife Branch at the installation. The birds carve out homes in long-standing pines and benefit from thinned and burned forest, he said.

At military posts across the southeast, the Pentagon beginning in 1994 implemented programs to expand the birds’ on-post populations, which included severe restrictions on military training near their habitats.

Red-cockaded woodpeckers have been protected since the U.S. government classified them an endangered species in the 1970s. Last year, the federal government proposed downgrading the bird to a threatened species, partially because of the successes seen at military installations including Fort Stewart.

In 2012, Fort Stewart surpassed its goal of housing 350 mating pairs of red-cockaded woodpeckers, up from only 150 pairs in 1994. Last year, the population had grown to more than 600 mating pairs, and Fort Stewart has begun giving away some of its young woodpeckers to other locations in Georgia, Florida and South Carolina that are working to rehab their own populations, Carlile said.

The woodpeckers’ success at Fort Stewart has allowed the Army to remove all woodpecker-related training restrictions on the post. Previously, military vehicles could not operate within 50 feet of woodpecker cluster sites. Soldiers could only fire blank rounds from some large-caliber weapons near the birds.

Even with those mitigations ended, the birds have continued to thrive, Carlile said.

“You can see that training has had no effect on the continued growth of the woodpecker,” he said. “That’s very freeing for the Army, for training here at Fort Stewart.”