Europe is a ‘priority theater’ for US Army, top general says 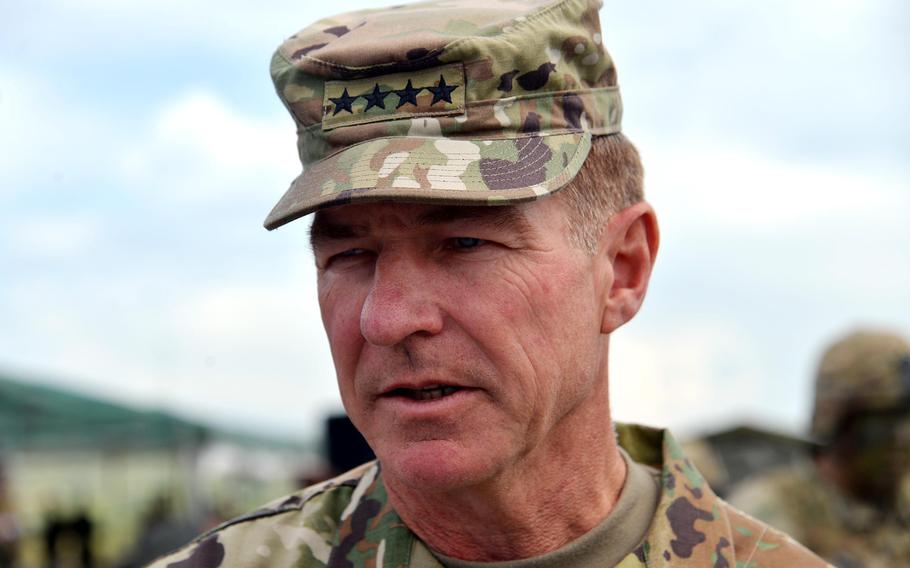 Buy Photo
Then-Army Vice Chief of Staff Gen. James C. McConville talks to Stars and Stripes following a live-fire demonstration in Cincu, Romania, in 2017. Now the chief of staff, McConville is in Germany this week for talks with allied ground commanders from across Europe. (Michael Abrams/Stars and Stripes)

STUTTGART, Germany — Europe remains high on the list of the U.S. Army’s priorities, the Army's top general said Thursday after holding in-person talks with allied ground commanders for the first time since the coronavirus pandemic started.

“Europe is a priority theater for the United States Army,” Gen. James McConville, the Army’s chief of staff, told reporters by phone from U.S. Army Europe and Africa headquarters in Wiesbaden after holding three days of talks with European allies.

The military leaders agreed at three days of discussions — which also marked the first in-person meetings between them since former President Donald Trump ordered sweeping cuts to the number of U.S. troops in Germany — that a “policy of strength” was the best way to deter adversaries like Russia, McConville said.

A focus of the talks had been on ensuring that U.S. and partner military modernization efforts are in sync, he said.

“Our allies are all taking a look at where they need to be in the future. Their priorities are really on command and control, making sure we can all work together,” McConville said.

The U.S. Army has embarked on a modernization push focused on improving long-range precision fires while adding more sophisticated command and control capabilities to counter adversaries like Russia and China.

But those upgrades need to be compatible with what allies are doing, since “we are always going to fight with allies and partners,” McConville said. “As we build these systems, as we transform our armies and militaries, we want to make sure we can all communicate with each other.”

As part of the U.S. effort to expand military capabilities in Europe, the Army last year reestablished V Corps, which will have a forward operating post in Poznan, Poland, on NATO’s eastern flank. V Corps will eventually oversee Army maneuvers all over Europe.

Later this year, the Army will get two new units and an additional 500 soldiers in the Wiesbaden area with the arrival of a Multi-Domain Task Force and Theater Fires Command.

“It’s a big expansion of capability,” said Gen. Christopher Cavoli, commander of U.S. Army Europe and Africa, who hosted the meeting of more than 30 European army chiefs at his Wiesbaden headquarters.

“There’s been a very significant, very steady transformation of the capability we have over here,” Cavoli said.

The force in Europe has been beefed up in a relatively short amount of time, he said, including with the addition of Army artillery units in Germany within the past two years.

But it was unclear what the ramifications could be for the mission in Europe of a $3.6 billion reduction for the Army in its draft budget, and a gradual shift in the U.S. military's focus toward the Pacific region and what it needs to do there to counter China.

Asked whether he anticipated any cuts or adjustments in troop rotations to Europe, McConville said that the Army remained fully committed on the continent.

“We are going to continue to support the exercises and rotations,” he said.

The Army has been continuously rotating large units to Europe for several years, including tank and combat aviation brigades. How that mission will evolve over time depends in part on how allied militaries develop, Cavoli said.

“The exact mix of U.S. forces here depends on developments of other countries in the alliance. As they modernize, as they make forces available, that changes what is expected or required on the U.S.,” he said.

McConville declined to comment on the plan by the Trump administration to sharply draw down the number of soldiers based in Europe. The Biden administration has put that move on indefinite hold and begun adding more forces in Germany.

“We are in full support of the (current) administration’s plan that we are executing right now,” McConville said.