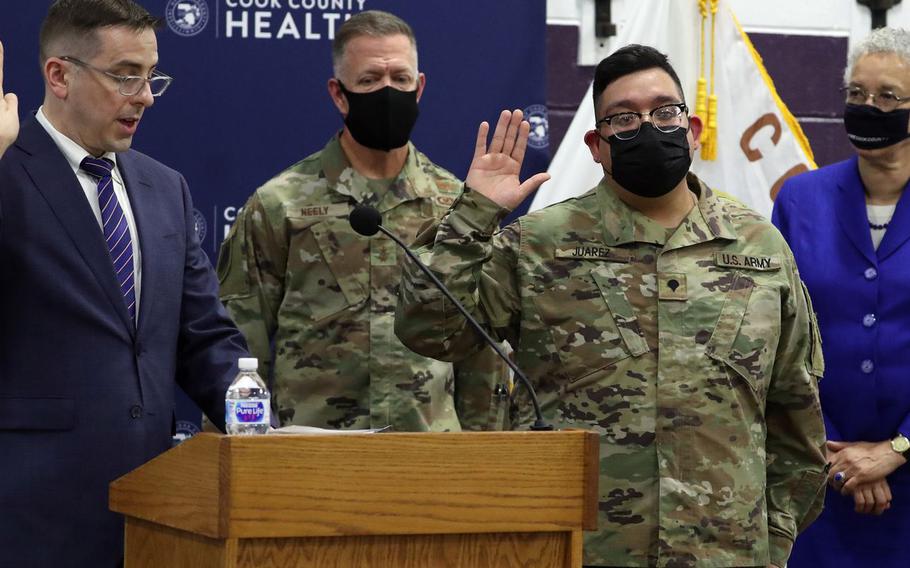 With his fellow soldiers looking on at the Cook County mass vaccination site in south suburban Harvey, the 31-year-old specialist raised his right hand and swore allegiance to his adopted country. He vowed to bear arms in its defense, serve noncombat roles if needed and perform “work of national importance under civilian direction when required by law.”

In other words, he promised to keep doing everything he already has done with the Illinois National Guard.

“I’m proud to be doing this here today, with all my friends watching,” Juarez said before the ceremony. “But to be honest, I don’t feel all that different. This is the only country I’ve ever known and I’ve always felt I was an American. I’ve always wanted to help my country in any way I could, whether I was technically a citizen or not.”

The ceremony came as the Guard has begun winding down its vaccination duties across the state. At the height of the rollout, Gov. J.B. Pritzker deployed more than 1,600 guardsmen to help with the effort. As of Thursday, only 898 members remained on active duty.

With the soldiers’ assistance, Cook County has given more than 800,000 doses of COVID-19 vaccines since late December. The demand, however, has fallen in recent weeks, leaving less need for centralized vaccination sites and spurring a new strategy for meeting hard-to-reach residents where they live, work and gather.

In late May, the county permanently closed three of its six suburban vaccination sites in favor of pop-up and mobile clinics. Though soldiers are assisting with those efforts, their involvement is expected to finish by late July.

Their withdrawal would mark the end of the Guard’s unprecedented role in responding to COVID-19. Since the earliest days of the pandemic, troops established the first state-run testing sites and ran them with military precision as they performed more than 233,000 tests over a four-month period. After spending the spring and summer testing people for COVID-19, some soldiers returned to vaccinate the public.

“I think it has been great for the guardsmen to serve in this way,” County Board President Toni Preckwinkle said during Juarez’s ceremony. “It certainly has been wonderful for all of us who have been beneficiaries of their great work.”

Juarez, who works as a machinist at a central Illinois garage door factory, was deployed to help with the county’s vaccination efforts in March. He is assigned to the registration desk, answering questions about the process for nervous patients and translating documents for those who only speak Spanish.

Born in Tampico, Mexico, he immigrated to the U.S. with his mother when he was 6 years old because the country offered better job opportunities for his father, who had moved here a few years earlier. The family, which included his parents and two siblings, all shared a bedroom in a two-room trailer in Arcola, a small town about 35 miles south of Champaign.

“We came here for the same reason everyone comes here: We wanted a better life,” Juarez said. “It was rough and we didn’t have a lot of money, but we made the best of it.”

At the time, no one in Juarez’s family had legal documentation to live and work in the country, but he always considered the U.S. his home. He said he didn’t give much thought to his official status until he grew older and found it difficult participate in teenage rites of passage such as getting a driver’s license, finding an after-school job or applying for college scholarships.

A beneficiary of the Obama administration’s Deferred Action for Childhood Arrivals program, he eventually was able to obtain a work permit and build a life without fear of deportation. And after marrying his wife, Kristina, in 2016, he became a permanent U.S. resident.

Through it all, he dreamed of becoming a citizen. The bureaucracy and expense — he spent nearly $10,000 on legal costs and various administrative fees — made it practically impossible for him to do.

Until he spoke with an Illinois National Guard recruiter.

Juarez joined the Guard in November 2019 and immediately enrolled in a program that makes the citizenship process faster and cheaper than the route typically taken by people who immigrate without documentation. He had his citizenship papers in less than two years at no cost to him.

His mother is now expected to have an easier time with her citizenship application because of his status.

“It’s an amazing program and it’s a fair one,” he said. “I think everyone should serve their country in one way or another. You don’t have to be in the military, but you should find a way to make life better for others.”

When his mission ends, Juarez will return home to his wife and 10-year-old daughter, Emma. He’ll resume full-time work while also attending Parkland College in Champaign, where he is working on business marketing degree thanks to the Illinois Guard’s tuition assistance program.

He has been taking classes online throughout his deployment, studying for two to three hours after his shift at the vaccination site each day. It’s a minor sacrifice, he said, to be a part of a historic moment.

“I’ll always be proud of what we’ve done here,” he said. “I had a chance to step up and help people in my state when my country needed it. That’s not a small thing.”