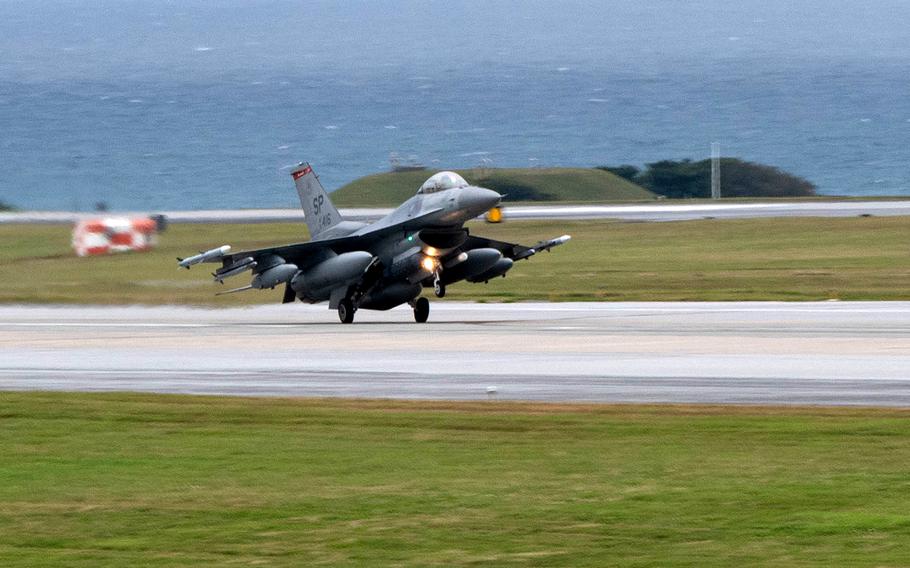 A U.S. Air Force F-16C assigned to the 52nd Fighter Wing, Spangdahlem Air Base, Germany, lands at Kadena Air Base, Japan, Jan. 16, 2023. A contingent of F-16s from Spangdahlem will support operations at Kadena and the western Pacific region, alongside F-22s from Elmendorf Air Force Base, Alaska. (Tylir Meyer/U.S. Air Force)

The only U.S. Air Force base in Germany with fighter jets is loaning some of its air combat power to Okinawa, where older aircraft are gradually being phased out and returned to the United States.

A contingent of F-16CM Fighting Falcons and airmen from the 52nd Fighter Wing at Spangdahlem Air Base arrived in Japan on Monday, the Air Force said.

They’ll support operations at Kadena Air Base and the western Pacific region alongside F-22s that arrived earlier from Elmendorf Air Force Base, Alaska. About a dozen Raptors have been deployed to Okinawa since Nov. 4.

The Air Force didn’t say how many F-16s deployed from Spangdahlem nor how long they’ll stay on Okinawa. Within Europe, the service also bases fighter jets in England and Italy. 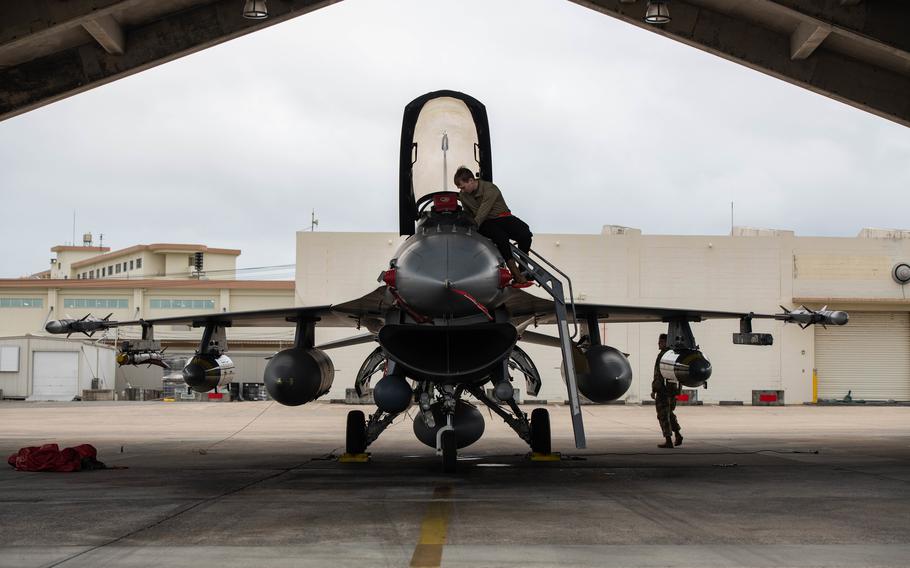 “We are excited to be here supporting our allies and partners in the Indo-Pacific region,” Lt. Col. Shaun Loomis, 480th Expeditionary Fighter Squadron commander, said in a statement. “We look forward to training and operating in this uniquely complex and strategically vital region.”

The first group of F-15 Eagles to permanently depart Kadena left in early December, bound for use by the National Guard or storage in the Air Force boneyard.

The Air Force in October announced plans to replace the two units of F-15 Eagles positioned on Okinawa – the 44th and 67th Fighter Squadrons – with rotating units of advanced Raptor stealth fighters for the foreseeable future.

The phaseout of the 48 Eagle fighters based on Okinawa for 43 years is supposed to take place over two years with no gaps in fighter coverage, the Air Force has said.

The move to temporarily relocate fighters from Europe comes amid Russia’s full-scale war in Ukraine and U.S. moves to reassure allies in Europe. But the Asia-Pacific region also is a hotspot due to elevated tensions between China and Taiwan.

The Spangdahlem F-16s will help Kadena “deter and, if necessary, prevail over acts of aggression that threaten peace and stability in the Indo-Pacific,” the Air Force said.