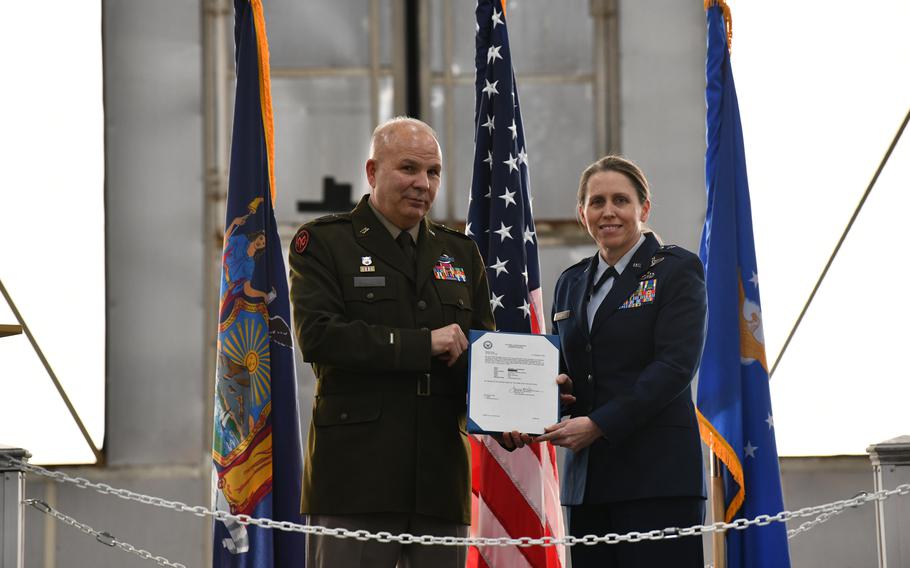 In a press release provided by Gov. Kathy Hochul’s office, Donnell of Clifton Park, N.Y., received the promotion during a ceremony at Stratton Air National Guard Base to become one of only five women to attain the rank of major general in the New York National Guard. Donnell’s rank was pinned on by her father, Dr. Robert Donnell, and brother, Air National Guard Technical Sgt. John Donnell.

Hochul appointed Donnell as commander of the 5,800 Airmen of the nation’s largest Air Guard contingent in April 2022.

“It is an honor to be recognized by Governor Hochul, the first woman to lead our state,” Donnell said in a press release. “These stars are not about me: They’re about making a difference for the nearly 6,000 men and women of the New York Air National Guard and a reflection of their collective accomplishments.”

“I’m thrilled to celebrate Major General Donnell’s historic achievements and her continued dedication to our state,” Hochul said. “New York is so fortunate to have individuals such as Major General Donnell who are willing to devote their careers to public service, answer the call and put themselves in harm’s way to help their fellow New Yorkers and serve their country.”

Members of the Air National Guard’s 107th Attack Wing, based at Niagara Falls Air Reserve Station, were the first military members who responded to the deadly blizzard that hit Buffalo during the Christmas holiday. Men and women of the 107th rescued stranded motorists in whiteout conditions, transported critically ill patients, and one member even delivered a baby girl and then transported the mother and baby to the hospital.

The 109th Airlift Wing, based at Stratton Air National Guard base, flies LC-130s and is the only unit in the world with heavy-lift aircraft equipped with skis. These aircraft are capable of landing on snow and ice, supporting the nation’s arctic strategy and important climate research being conducted in Antarctica by the National Science Foundation in Antarctic.

Other New York Air Guard troops fly needed supplies around the world, protect American and allied troops by flying remotely controlled aircraft on combat air patrols, track aircraft in nation’s skies as part of NORAD, and stand ready to conduct rescues at sea. New York also has the distinction of being the first state to have a woman join its National Guard: World War II veteran and nurse Norma Parsons joined in 1956, attached to the 106th Tactical Hospital.

“Denise Donnell is an outstanding leader, and experienced pilot, who has distinguished herself at all levels of command,” Adjutant General of New York State, Major General Raymond Shields said in a press release. “I am confident that the men and women of the New York Air National Guard will continue to meet every challenge they are given under her leadership.

“She is well deserving of this important promotion.”

Donnell began her military career as a U.S. Navy aviator in 1993, flying P-3 Orion anti-submarine and maritime surveillance aircraft. She served in the Navy until 2002, when she joined the New York Air National Guard’s 105th Airlift Wing, based at Stewart Air National Guard Based in Newburgh, where she learned to fly the giant C-5A Galaxy airlifter.

She then commanded the 105th’s aircraft maintenance and maintenance squadrons — and mastered flying the C-17 Globemaster III before transferring to the 109th Airlift Wing in 2013.

Donnell commanded the 109th Maintenance Group from 2013 to 2016. During that period, she qualified on the unique ski-equipped LC-130 Hercules aircraft flown by the 109th Airlift Wing and commanded Air Force support to the National Science Foundation at McMurdo Station, Antarctica, during the 2014-2015 support season.