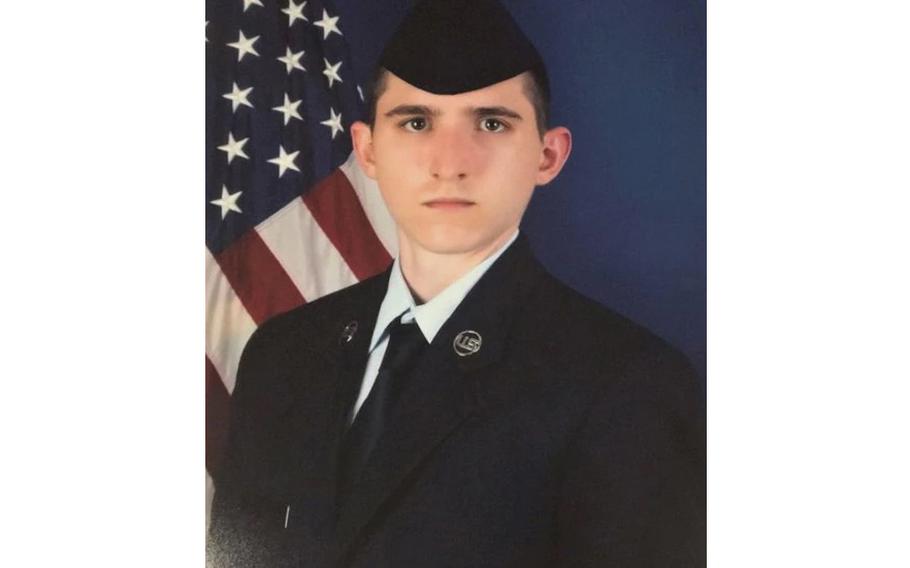 (Tribune News Service) — A former civilian contractor will spend a decade in prison for hitting four airmen on Keesler Air Force Base, killing one and injuring the three others, while he was high on fentanyl and other drugs.

Emmett Jason Bennett, 25, of Biloxi, Miss., was sentenced to 10 years in prison on a federal charge in the DUI death case. He will also spend five years under post-release supervision. In addition, Judge Sul Ozerden ordered Bennett to pay $166,435 in restitution for the July 28, 2021, crash that killed Keesler airman Daniel J. Germenis.

The judge imposed the sentence on Dec. 20 in federal court in Gulfport.

Bennett had traces of the prescription painkillers — fentanyl and oxycodone — and marijuana and an herbal supplement called kratom in his system when his Ford F-150 truck crashed into a light pole, then swung around and hit the airmen at the Biloxi Air Force base.

Prior to sentencing, the judge heard from one of the injured airmen and his wife.

'The worst day of my life'

Just before Bennett's pickup truck hit them, the injured airman said he had been talking to Germenis about how he planned to ask his now wife to marry him the following week.

"On the same day, he (Germenis) was taken from his wife and family because of a careless individual," the airman said. "Having to recall this day makes me sick to my stomach every time."

"I wish I didn't, but I can still … vividly picture (Bennett's) white truck coming toward us," he said.

After impact, the injured man said he saw one fellow airman's "bloody, unconscious face" and heard another screaming for help.

"Watching the driver (Bennett) who had just hit us get out of his truck and start shaking Airman Germenis while insisting he (Bennett) didn't do it instantly made my heart drop," the airman said.

The airman who submitted a letter to the judge also suffered serious injures and continues to receive medical treatment.

The victim who spoke suffered permanent scarring and problems with his right arm that prevents him from doing things he loves, like playing basketball and other physical activities.

"When my wife and I take our dog for a walk, I feel like I constantly have to watch out for vehicles," he said. "Just the sound of tires from a car approaching as well as passing by makes me think of that day and makes me anxious. "

His wife added, "This isn't just an incident that happened on one day in July; this is a continuous situation that gets brought up daily and will continue to get brought up. Whether his arm heals in a couple of years or not, he can't unsee what he saw or not feel what he felt because it's not something you can forget.

"My husband and our family will forever live with this incident engraved in our minds all because of an inconsiderate decision the driver of the vehicle decided to make."

What happened in the fatal DUI crash

Germenis and the other three injured airmen were walking on Keesler Air Force Base when Bennett's truck hit the light pole and crashed into them. Germenis was dragged over 100 feet before Bennett's speeding truck stopped.

After that, federal authorities confirmed Bennett walked up to an unconscious Germenis and started shaking him in an apparent attempt to wake the victim up.

In addition to blood tests and other toxicology tests that confirmed the presence of drugs in Bennett's system, authorities found text messages between Bennett and his fiance about drug use.

Authorities said they learned Bennett smoked marijuana daily, had a problem with opiate use, routinely took kratom and had overdosed on oxycodone at one point before the July 2021 fatal crash.

Investigators collected other evidence, such as photographs, additional witness testimony and video for jurors had the case gone to trial.

In exchange for his plea, federal prosecutors dismissed an additional federal charge of involuntary manslaughter.

Bennett had been working as a civilian contractor at Keesler for about a month when he struck and killed Germenis and injured the others.

The FBI, the Air Force Office of Special Investigations, Air Force Security Offices and the Biloxi Police Department handled the investigation. The FBI has jurisdiction because the wreck took place on federal land, and the contractor is a civilian.

Keesler honored Germenis during a fallen warrior series in August.

Germenis was a native of Bastrop, Texas.

Before joining the military, Germenis had been an Eagle Scout, a volunteer, and a devoted member of his church. He married his wife, Verity Smith, on June 26, 2021, in Biloxi.

The day of his death, Germenis and the other airmen were on their way to do volunteer work.

The airman's mother remembered him as someone who always wanted to serve his country and make a difference.

Germenis was pursuing a career as a cyber systems operator at the time of his death. He was a member of the 336th Training Squadron at Keesler.