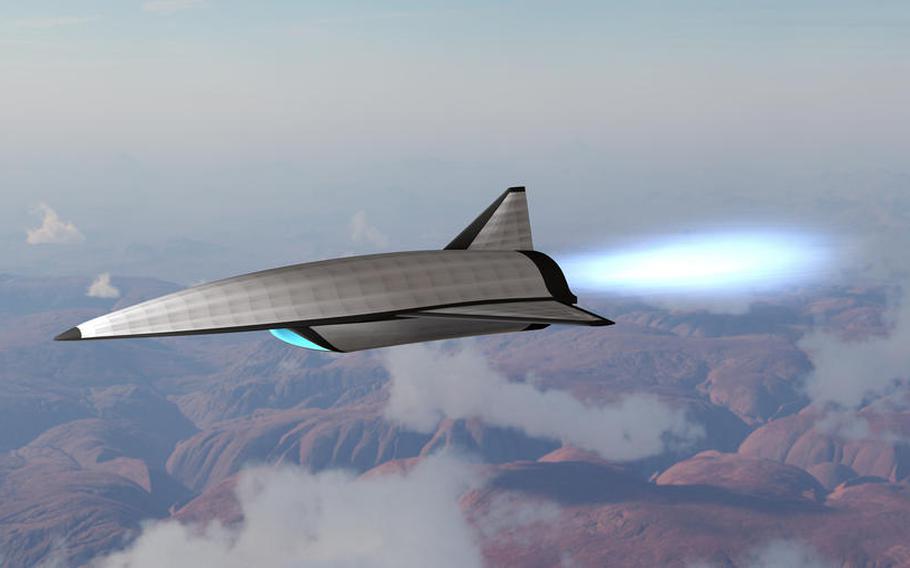 Leidos has been selected by the U.S. Air Force Research Laboratory to develop an air-breathing hypersonic system. (AFRL/Leidos rendering)

(Tribune News Service) — With the work slated to be performed at Wright-Patterson Air Force Base, defense contractor Leidos Inc. has been awarded a $334 million Air Force Research Laboratory (AFRL) contract to develop an air-breathing hypersonic system, the Department of Defense and the company said.

The "Expendable Hypersonic Multi-mission ISR (intelligence, surveillance, and reconnaissance) and Strike program" — dubbed "Mayhem" — will span a 51-month period of performance, Leidos said in a release.

The goal is a vehicle that can perform intelligence, surveillance and reconnaissance missions. The concept art provided by Leidos appears to show an uncrewed vehicle.

The initial task order is $24 million to conduct system requirements review and conceptual design review in a digital engineering environment.

"To deliver the next generation of air-breathing hypersonic system, we'll leverage our years of investment, knowledge and success in the hypersonic field," Leidos' Dynetics President Steve Cook said. "Our team is prepared to undertake this vital mission for our nation."

The new system will use a scramjet engine to generate thrust, propelling the vehicle across long distances at speeds greater than Mach 5, Leidos said.

The company is expected to design and develop a large-class version that surpasses current air-breathing systems in range and payload capacity, using digital engineering.