Microwave technology is getting closer to the battlefield, and this NM facility is at the heart of it 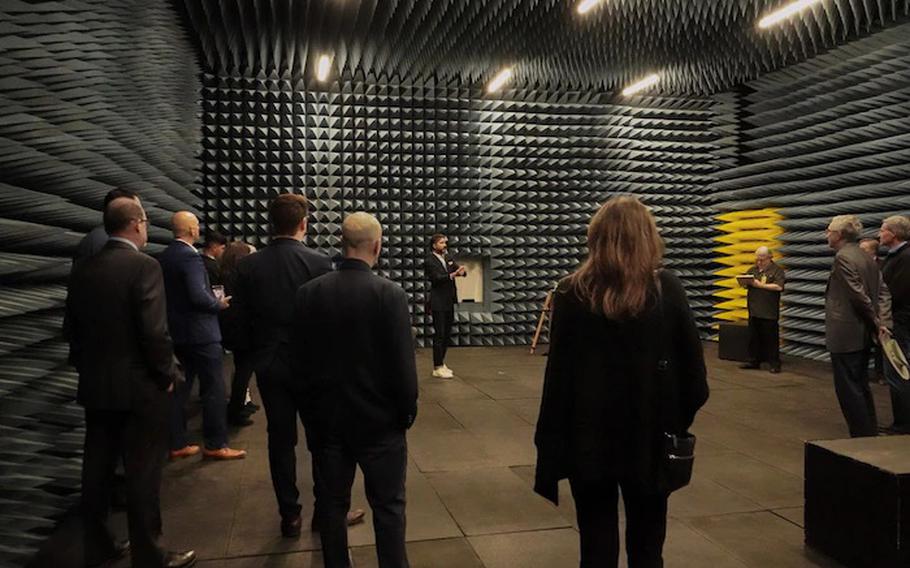 Air Force Research Laboratory officials held a ribbon cutting for the new 12,000-square-foot High Power Electromagnetic Effects and Modeling center, which cost $6 million to build as an add-on to an existing building at Kirtland Air Force Base in New Mexico. (U.S. Air Force)

Top AFRL officials held a ribbon cutting for the new 12,000-square-foot High Power Electromagnetic Effects and Modeling center, which cost $6 million to build as an add-on to an existing building at Kirtland. It's the latest facility upgrade in a decade-long AFRL effort to provide the modern infrastructure needed to fully develop emerging technology for warfighters.

That includes microwave and laser systems — known as "directed energy" — to confront 21st-century threats like swarms of enemy drones, as well as space-based defense capabilities to better compete in the global race for domination in today's new era of space exploration and human expansion into the cosmos.

"More than $100 million has been invested in facilities like this to increase our research capabilities," Wood told Wednesday's inauguration participants. "… It's all aimed at accelerating our development capabilities."

That includes a new, high-tech, digital "war-gaming" facility that will open in early 2023 where military personnel and lab technicians can directly participate together in virtual battlefield exercises to test new directed-energy and space-defense systems.

The AFRL has been working for decades to advance laser and microwave weapons, converting Albuquerque into a "center of excellence" for directed energy through partnerships with industry. And those efforts are finally bearing fruit, with new weapons now being tested in real-world environments that could lead to battlefield deployment in the next few years. Air Force Research Laboratory officials held a ribbon cutting for the new 12,000-square-foot High Power Electromagnetic Effects and Modeling center, which cost $6 million to build as an add-on to an existing building at Kirtland Air Force Base in New Mexico. (U.S. Air Force)

The Joint Counter UAS Office and the Army's Rapid Capability and Critical Technologies Office field-tested THOR in multiple exercises over the past year. Now, global engineering firm Leidos is incorporating the test results into a new prototype called Mjölnir — named after the mythical hammer wielded by the Norse god Thor — under a $26 million AFRL contract.

"Those tests allowed us to take that technology to warm, dusty, real-world locations where Army operators could actually try it out, see how it works and give feedback to build the next generation prototype," Wood told the Journal.

Such cross-collaboration with other DOD entities and industry partners is laying the foundation for accelerated development going forward.

"We're placing a lot more emphasis on speed to get things out of the lab and into the hands of warfighters to translate those technologies into new capabilities at a faster pace," Wood said.

Under another collaborative effort, AFRL and the Office of Naval Research are now adapting an AFRL-built microwave system for mounting on an airborne platform.

AFRL's newly inaugurated electromagnetic effects and modeling center will provide increased testing and evaluation capabilities for microwave systems. It includes echo-free chambers for radiation testing on electronic systems, plus a "forensics lab" to determine the effects of microwave weapons on circuit boards.

"Electromagnetic weapons attack the digital nervous system of drones with different waveforms that make them wobble and fall," Wood said. "We then tear the drone apart to look inside to determine how the waveform affected the specific chips and electronic technology."

The new facility brings AFRL teams together in a single location to study those things.

Albuquerque engineering firm Verus Research, for example, won a new, $19.5 million contract in October to assist in effectiveness testing and evaluation, building on previous contracts it's won to help track and confirm weapon performance. The company's workforce has grown from 44 in 2017 to 113 now.