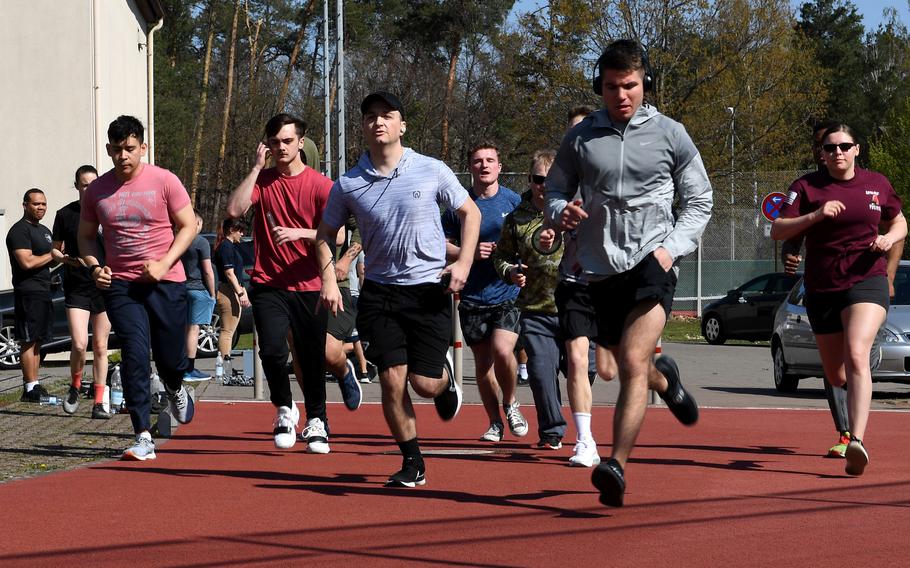 Members of the 86th Security Forces Squadron run at Ramstein Air Base, Germany, April 20, 2022. Allegations that a senior noncommissioned officer from the unit offered a bribe to pass a physical training test were determined to be false, base officials said. (Trevor Rhynes/Air Force)

KAISERSLAUTERN, Germany — A Ramstein Air Base security forces senior noncommissioned officer who was accused in a social media post of bribing another airman to get a passing score on a physical fitness test has been cleared of any wrongdoing, according to a base statement Wednesday.

Investigators determined “the specific accusation to be false” and found “no instances of bribery,” officials with the 86th Airlift Wing at Ramstein said in the statement.

The Air Force Office of Special Investigations looked into the allegations brought forth in April and closed the case in September, officials said Wednesday.

One person leveled the accusation, officials said, but they refused to say whether anyone will be punished or held accountable for spreading false information.

“The Air Force does not release information on adverse personnel actions,” the statement said.

The rumor of the cheating first surfaced on the popular Amn/NCO/SNCO Facebook page on July 31.

“An 86th SFS SNCO here at Ramstein got caught bribing the tester to change pt numbers so they would meet standards and not fail,” said the anonymous post, received via the page’s inbox. “Situation is being kept on the low of course, because of their rank.”

That initial post generated more than 350 reactions and 78 comments.

A follow-up post on Aug. 10 said that the SNCO’s actions had triggered more rigorous and additional physical training sessions for those scoring below a certain threshold on their PT tests to avoid a similar situation.

An official memo posted to the Facebook page outlined the physical training program for the unit’s operations and training flight.

The July 27 memo established physical fitness training three times per week for those who scored below 95% on recurring squadron-internal fitness tests.

In August, a base spokeswoman confirmed the memo’s authenticity and said the policy was part of several initiatives designed to ensure compliance with physical stamina and combat readiness requirements.

When asked Wednesday, officials did not say whether those more rigorous training requirements are still in place.

“These programs are regularly evaluated and adjusted,” the base statement said.