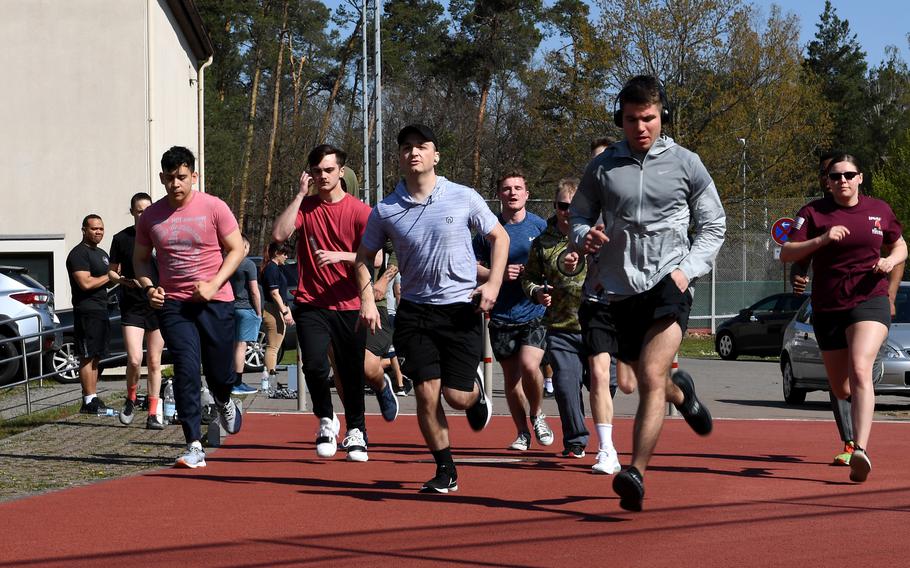 Members of the 86th Security Forces Squadron run at Ramstein Air Base, Germany, April 20, 2022. Base officials are investigating allegations put forth on social media accusing a security forces airman of offering a bribe to pass a physical training test. (Trevor Rhynes/U.S. Air Force)

KAISERSLAUTERN, Germany — Ramstein Air Base leaders are investigating allegations that an airman tried to bribe officials into issuing a passing score on an annual physical fitness test.

A spokesman for the 86th Airlift Wing acknowledged in an email to Stars and Stripes on Tuesday that an investigation is underway but declined to give details while it is active.

Last week, social media users who said they are affiliated with the 86th Security Forces Squadron at Ramstein Air Base anonymously alleged a cover-up of the undisclosed disciplinary infraction and described plummeting morale among the ranks of the military police unit.

"An 86th SFS SNCO here at Ramstein got caught bribing the tester to change pt numbers so they would meet standards and not fail,” one commenter said on the popular Amn/NCO/SNCO Facebook page.

Unit members are responsible for security at one of the Defense Department’s largest overseas installations and one of the Air Force’s busiest air transportation hubs.

Bribery is punishable by court-martial under the Uniform Code of Military Justice.

The anonymous commenter wrote on the Amn/NCO/SNCO Facebook page that following the incident, physical training for the unit was significantly increased, which placed an additional burden on already overworked airmen.

“Instead of punishing individual and holding them accountable, the airmen are now required to attend more pt so no one else is in the same situation to fail,” the commenter said.

Another post to the Facebook page shared an official memorandum outlining the physical training program for the unit’s operations and training flight.

The July 27 memo establishes physical fitness training three times per week for all those members scoring below 95% on recurring squadron-internal fitness tests. Those meeting the 95% score would have to lead one session per week, according to the memo.

A base spokesman confirmed the memo’s authenticity Tuesday and said the policy is part of several initiatives designed to ensure compliance with physical stamina and combat readiness requirements. The spokesman added that fitness programs are “constantly evaluated.”

Another commenter identifying themselves as a member of the 86th Security Forces Squadron said the increased physical training load has lengthened work schedules, keeping security forces members at work from 4:30 a.m. to 8 p.m. on some shifts.

“(I don’t care) who you are, those make for long days,” the anonymous commenter said. "It’s tough to convince Airman to stay in (security forces) when they have friends their same rank in other career fields working half the time making the same money.”

While security forces units are known for demanding duty schedules that ask them to man mission-essential security posts around the clock, the wing said there is no blanket demand for excessive hours.

“No requirement exists for 86 SFS Airmen to remain at work for a 17.5 hour day,” a spokesman wrote in an email. Unit leaders “maximize schedule flexibility and ensure our Airmen are not working unnecessary hours,” the email said.

The last annual inquiry into the unit’s morale and climate was a web-based survey last summer during Operation Allied Refuge, when security airmen worked long hours to help house thousands of Afghan refugees after the U.S.-backed government in Kabul fell to the Taliban.

The feedback reflected “the increased operational pace of that specific timeframe,” a wing spokesman wrote in an email Tuesday.

“Unit leadership and the Security Forces career field continue to pursue quality-of-life improvements for our Defenders and their families,” the email statement said.