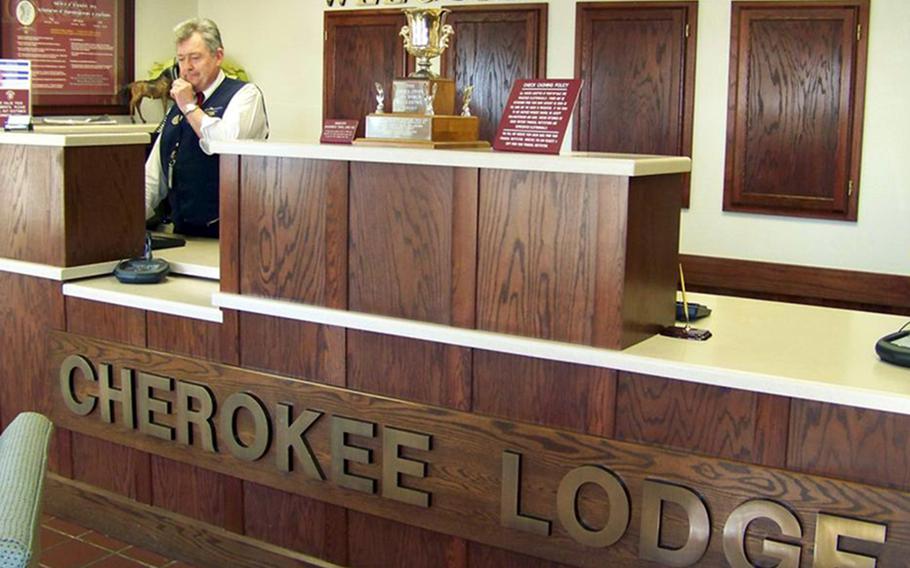 The reception desk at the Cherokee Lodge at Vance Air Force Base, Okla. The Air Force soon will close nine lodges at bases in the United States, including this one. (U.S. Air Force)

Nine more Air Force inns are shuttering and others may follow suit as the service struggles to sustain its network of dozens of worldwide lodges without taxpayer funding.

All the inns in the latest closure round are in the United States, the Air Force announced Wednesday.

The Wingo Inn will no longer be run by Air Force Inns but will transfer 20 of its rooms to the base outdoor recreation department for operation, Arnold Air Force Base officials said Friday.

The goal is to phase out reservations at the lodges by the end of this month and close those locations by spring, the Air Force said in a statement.

The Air Force announced in June that it was shutting down the Air Force Inn at Joint Base Anacostia-Bolling in Washington, D.C., and the North Star Inn at Greenland’s Thule Air Base.

The latest closures are necessary “to meet a Defense Department requirement that all lodging is self-sustaining without taxpayer funding,” the statement said. The Wingo Inn at Arnold Air Force Base, Tenn. is on the chopping block as the Air Force announced it will close nine lodges at bases in the United States. (U.S. Air Force)

In 2018, the Defense Department made changes that took away tax dollar support from military lodges. As a result, nightly rates at some locations more than doubled.

But increased room rates do not appear to be enough to cover costs.

“In order to maintain quality and meet standards, we must continue to evaluate lodging facilities at all installations,” Janae Sergio, Air Force Lodging chief, said in a statement.

Properties identified for closure had low occupancy in the years before the COVID-19 pandemic, require high maintenance and modernization costs or have fewer than 85 rooms. Off-base lodging availability also was considered.

Staying on base has traditionally been cheaper for traveling service members and their families but isn’t always the case anymore. The experience can be hit-or-miss, judging by room reviews on sites such as TripAdvisor.

A 2019 review of the Homestead Inn recommended that travelers stay somewhere else despite the $70 room rate at the time. The reviewer called the place “subpar and outdated.”

“There was a lizard in my room as well as a few tiny bugs and fly (sic) flying around … there was a tissue stuck in the door’s peephole,” the reviewer wrote.

The Wingo Inn fared better, with one reviewer in 2021 calling it “one of my favorite places to stay. We have held several mini-family reunions at the Wingo, with our three veteran family members and other extended family.”

The services have the option of privatizing base lodging, something the Army started in 2009. Real estate investment group Lendlease took over as the owner, developer and asset manager and IHG Hotels and Resorts as the hotel operator.

Some social media users would like to see the Air Force to do the same.

“Dude, if IHG can run on base lodging, that’d be huge,” said a comment on Air Force Reddit earlier this year. “I’ve only had negative experiences with AF Inns so far. A dream would be Hilton or Marriott operating on base lodging.”