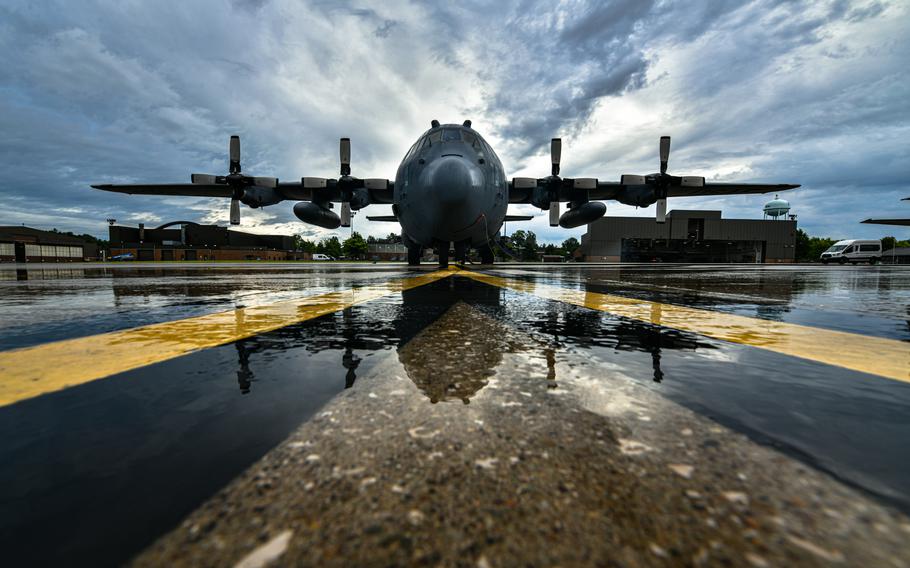 A C-130H Hercules aircraft assigned to the 757th Airlift Squadron sits on the flight line on July 22, 2020, at Youngstown Air Reserve Station in Vienna Township, Ohio. C-130H Hercules aircraft are capable of operating from rough, dirt strips and are the prime transport for airdropping troops and equipment into hostile areas. The flexible design enables the aircraft to be configured for many different missions. (Christina Russo/U.S. Air Force)

The Air Force grounded more than 100 of its workhorse turboprop C-130 Hercules aircraft after officials at Robins Air Force Base, Ga., discovered cracks in the propeller barrel assembly of one of the cargo planes, a service spokesman said Monday.

The grounding impacts 116 C-130H aircraft, which must now have their propeller assemblies inspected and, if necessary, updated to a newer version, said Maj. Beau Downey, a spokesman for Air Mobility Command. It was not clear Monday how long the planes would be grounded, but Downey said the halt had not affected U.S. operations worldwide since it began last week.

“Air Mobility Command, as the lead command, is working closely with affected units and technical experts across the mobility air forces to complete this action, while prioritizing available assets based on requirements,” Downey said in a statement. “We’re working to get the C-130Hs flying as quickly and safely as possible, assessing multiple avenues and options for filling the resulting airlift gap.”

The problem was first discovered by maintenance crew at Warner Robins Air Logistics Center during a post-depot inspection, according to the Air Force. Subsequent inspections on two additional C-130Hs with the older 54H60 propellers turned up similar cracks in their propeller barrels. Downey said the issue does not impact C-130Hs that have received upgraded NP2000 propeller assemblies or the newer C-130J Super Hercules models.

All the C-130Hs found to have troubled propeller barrels will have their 54H60 propellers replaced with the NP2000 propellers to solve the issue, according to the service.

The grounding marks the second time in recent years that the Air Force has had to pause flying some of its C-130 aircraft. In 2019, the service halted flights of C-130H and C-130J model aircraft after discovering unusual cracks in the wing joints of at least two of its planes.

The Air Force has flown C-130s since the 1950s. The aircraft can carry people and gear on a wide variety of operations, including landing on short, dirt airstrips under combat conditions. The newest C-130J models, which are longer, faster and capable of carrying more weight than any of the previous versions of the aircraft, entered the fleet in 1999. The Air Force has said C-130s will continue flying into at least the 2030s.