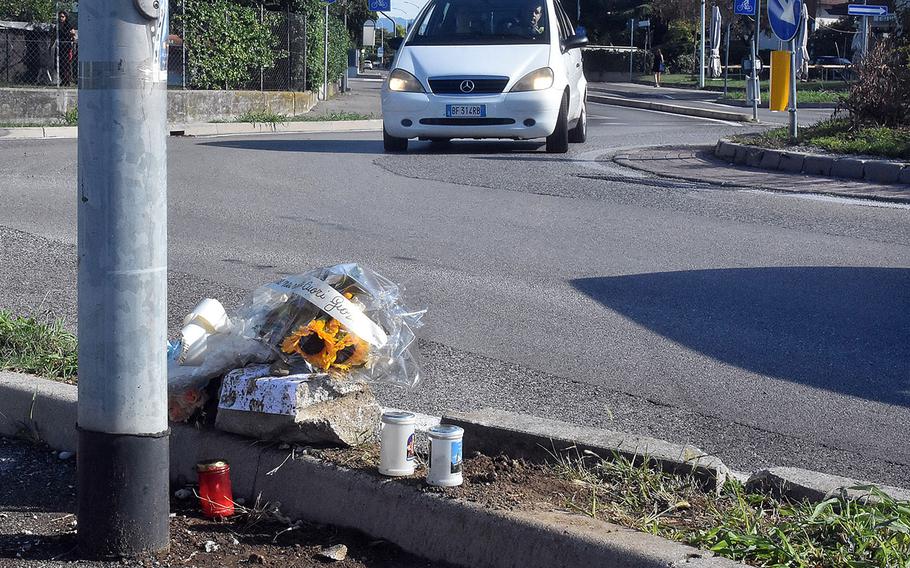 A car passes through a roundabout in Sant’ Antonio, Italy, on Aug. 22, 2022, where an Italian teenager was killed a day earlier in an apparent crash involving a U.S. airman. Italian media reports citing prosecutors said the airman tested well over the blood alcohol limit for driving. (Kent Harris/Stars and Stripes)

An Aviano Air Base airman arrested Sunday on suspicion of vehicular homicide in the death of a teenager was highly intoxicated at the time of the accident, Italian authorities said, according to media reports.

The airman's blood alcohol content was 0.209% when tested after her car hit 15-year-old Giovanni Zanier on a bike path in the district of Sant' Antonio di Porcia, prosecutors told newspaper Il Gazzettino on Monday. The legal limit in Italy is 0.05% and 0% for drivers under 21.

A witness told the newspaper that she had seen the clearly impaired airman in the parking lot of Papi on the Beach disco, where the witness was picking up her daughter about 2 a.m.

The witness, Cristina Fusaz, said the airman stalled the car several times in the parking lot, then almost immediately started zigzagging, according to the newspaper. Fusaz said she slowed down to put distance between her car and the airman's.

"I did not feel safe. I thought, 'This person is going to get hurt,'" she told Il Gazzettino.

Seconds later, the airman's car exited a darkened roundabout, hit a sign, jumped the curb separating the road from the bike path and hit Zanier from behind. He was thrown about 30 feet and died almost immediately, according to police.

The boy was chatting with friends as he walked along the path, Il Gazzettino reported.

The airman suspected in the crash is 20 years old, under house arrest and awaiting criminal charges, according to Il Gazzettino and other media outlets.

In an interview with an Italian newspaper, the victim’s mother said the airman “must be tried in Italy and serve the entire penalty here."

"We all know of previous incidents that have involved the American military in terrible accidents here. The truth is in these areas, they can do what they want and remain unpunished,'' Barbara Scandella was quoted as saying by Rome daily La Repubblica.

Asked how a 20-year-old airman could be alone and intoxicated at a disco a few miles from base with no wingman or designated driver, Aviano spokesman Capt. Fred Wallace said that is under investigation.

Brig. Gen. Tad D. Clark expressed his condolences to Zanier’s family and the community Sunday in a statement, which added that the 31st Fighter Wing is working with Italian authorities.

The wing has declined to release further information regarding the incident.

Fusaz told Il Gazzettino that the airman's car suddenly accelerated just before the roundabout and that after the crash she seemed disoriented.

"The woman repeated that she would pay for everything," she told the newspaper. "She sat at the side of the road, constantly apologizing but didn't really seem to understand what she had done."