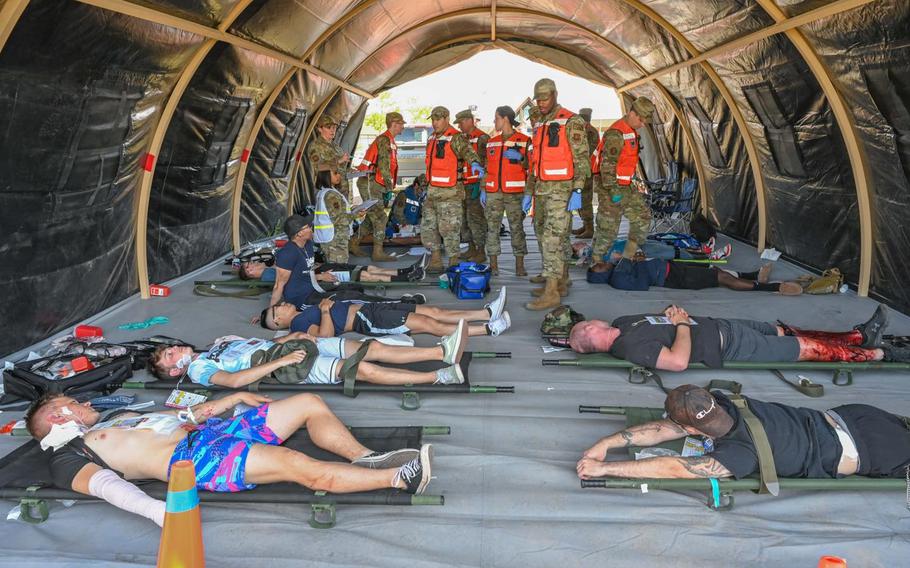 The 90th Missile Wing’s exercise June 29, 2022, responded to a hypothetical situation involving a Thunderbirds plane crashing into another aircraft in the sky and falling into the audience below. (F.E. Warren Air Force Base/Facebook)

CHEYENNE, Wyo. (Tribune News Service) — In the field of emergency planning and preparation, and especially in the military, a phrase often passed around is “hope is not a strategy.”

Each summer, the 90th Missile Wing conducts an exercise with a scenario relating to the USAF Thunderbirds Wings over Warren Air Show that is part of Cheyenne Frontier Days. This year’s air show will take place the morning of July 27.

Wednesday’s exercise responded to a hypothetical situation involving a Thunderbirds plane crashing into another aircraft in the sky and falling into the audience below.

“We like to know that if the worst-case scenario happens, it’s not the first time we’ve seen that presented to us,” said Maj. Stuart Yoder, chief of plans and programs. “It allows us to mentally prepare ourselves for the worst. That way, if anything better than that happens, it’s easy.”

Yoder said it’s extremely unlikely any accident or crash would happen during a Thunderbirds air show, as the USAF Thunderbirds are some of the best pilots in the world. Nevertheless, it’s good to be prepared.

The base also coordinated with civilian first responders, including American Medical Response ambulance service, Cheyenne Regional Medical Center and the UCHealth LifeLine medical air transport service. This is an important step because the base medical clinic does not have emergency services, Hight said, and a major accident could require the assistance of every available responder in the area. To begin the exercise, volunteers from the base’s security forces group, medical group and other units were dressed with “moulage,” which is makeup meant to look like real injuries. The volunteers then scattered throughout the parking lot of the Army Aviation Support Facility, positioning themselves under cars or in nearby fields to await treatment from medical responders.

In order to make the exercise as realistic as possible, some of the volunteers screamed or pretended to groan in pain, and the exercise started with a bang and a smoke cloud coming from the hypothetical crash site.

Groups of first responders worked through the exercise step by step, beginning with the arrival of base firefighters, who simulated putting out a car fire and rescuing a passenger. Hight said the dummy a firefighter pulled from the car weighed upwards of 175 pounds, again to make the simulation feel as real as possible.

Throughout the scene, members of the medical group worked to triage patients, treat immediate injuries and transport patients to medical tents. Hight said the tents are known as “casualty collection areas,” and in a real situation, people would then be transported from there to area hospitals.

People in the triage unit and medical group then went through the steps of treating the moulaged injuries, simulating as best they could the procedures they would take if they encountered real injuries. For example, one volunteer had a breathing tube taped to their face, because their indicated injury would have required that.

Evaluators stood close by to monitor every action taken by responders in the exercise. First responders and military personnel have specific procedures they are supposed to follow in these scenarios, and the evaluators are there to document if these are followed properly.

In one situation during the exercise, the UCHealth LifeLine paramedics landed their helicopter near the accident scene and attended to patients triaged by a medical team on the ground. One of the ground medical personnel gave the LifeLine responder a status update on the patients and handed over care of the patient to LifeLine, Hight said.

During the exercise, 90th Missile Wing Commander Col. Catherine Barrington, alongside Missile Wing group commanders, was in charge of leading the crisis action team and communicating with other agencies in the area. Hight said Barrington would contact people like the commander of the 20th Air Force, Wyoming’s governor and others to alert them of the situation.

Additionally, Barrington would likely give an order to shut down the airspace over the base to give priority to medical helicopters, Hight said.

Next week, the base units will hold an after-action report, called a “hot wash,” to share their evaluations of the response.

“After the exercise is over we ... gather all of our observations from our wing inspection team — members embedded in the unit that are actually nominated by their commanders as top-tier folks who know what to look for,” Yoder said. “That way, we can gather all those notes, and then we present ... to leadership what went wrong and what went well, and our recommendations for maybe a way forward. And then it’s on the unit at that point to fix and make themselves better.”

Hight said if a unit’s response is not up to standard, the unit may be deemed deficient in a procedural category, and will have to correct their errors and show proof of improvement in the next exercise.