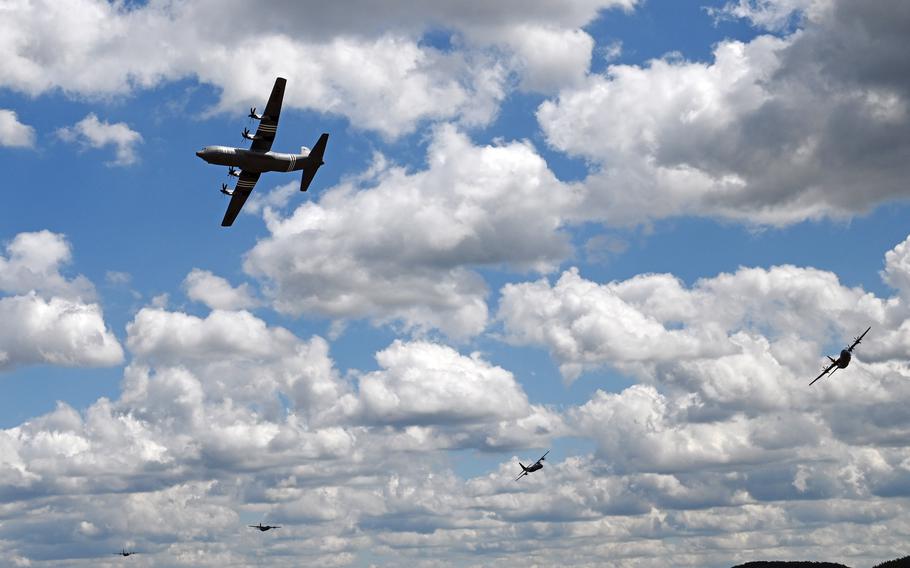 C-130J Super Hercules transport planes from the 37th Airlift Squadron fly over Ramstein Air Base, Germany, on May 25, 2022, before landing at the base. The unit celebrated its 80th anniversary with a large-formation mission and a parachute jump onto the base. Today’s squadron was founded as the 37th Transport Squadron in 1942 at Patterson Field, Ohio.. (Michael Abrams/Stars and Stripes)

RAMSTEIN AIR BASE, Germany — It was a sight rarely seen over this mobility hub: nine C-130J Super Hercules airplanes flying in formation and dropping 90 paratroopers onto a grassy landing zone between two runways.

Before the Wednesday exercise, it had been more than two years since that many C-130s flew a training mission together and about four years since paratroopers dropped in to Ramstein, said Capt. Mandy Olguin, a member of the 37th Airlift Squadron who flew one of the nine planes.

Ramstein is seldom used as a drop zone because of its busy flightline operations, but this day marked an exception because the mission was an anniversary celebration.

The 37th Airlift Squadron orchestrated the training exercise to commemorate its inception 80 years ago at Patterson Field, Ohio, during World War II.

Activated as the 37th Transport Squadron, the unit initially flew C-47 Skytrain transports from desert airfields in Egypt and Libya. Later, the squadron dropped paratroopers into Normandy on D-Day.

“It was important to do something special today to honor the people who have come before us … the pilots, the crews of those other aircraft,” said Olguin, who flew in the formation’s No. 3 plane. “It’s just a thank you and a big moment of gratitude to everything that they have done.” 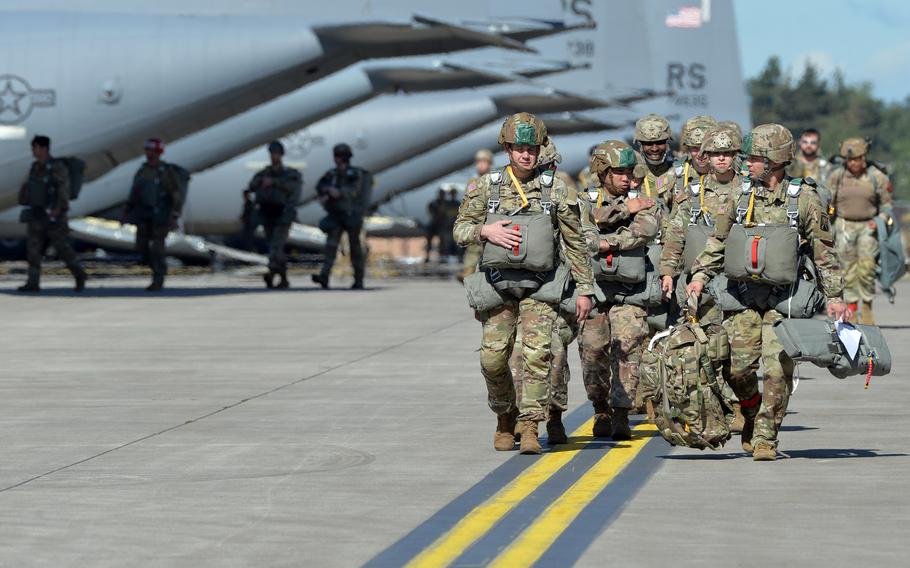 Paratroopers walk to their planes at Ramstein Air Base, Germany, on May 25, 2022. Nine C-130J Super Hercules aircraft flying together in a formation, dropped 90 paratroopers in back onto the base to mark the 37th Airlift Squadron’s 80th anniversary. (Michael Abrams/Stars and Stripes) U.S. Army paratroopers from Stuttgart, Germany, prepare to jump out of a C-130J Super Hercules during a training flight May 25, 2022, over Ramstein Air Base, Germany. (Jennifer Svan/Stars and Stripes) 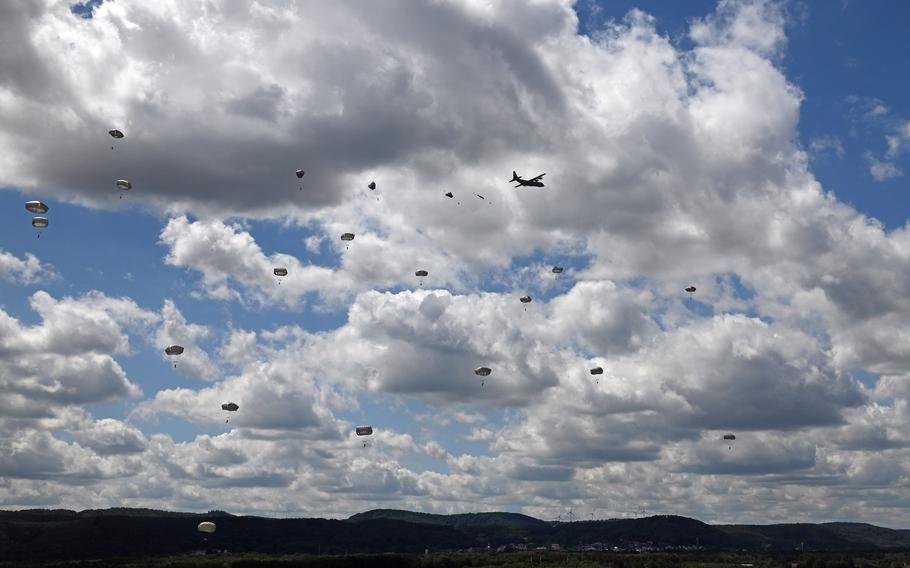 Nine C-130J Super Hercules fly in formation after taking off from Ramstein Air Base, Germany, on May 25, 2022. The planes dropped 90 paratroopers in quick succession onto a grassy landing zone between the base’s two runways. (Michael Abrams/Stars and Stripes)

Since 1994, the squadron has called Ramstein home, serving as the linchpin of the Air Force’s tactical airlift mission in Europe and Africa.

It’s so busy that “we’re lucky if we can get three aircraft in the air” at the same time for training, Olguin said.

The squadron employed 18 pilots and nine loadmasters for the flight. Most of the jumpers came from Army units in Germany, though a few Canadians and German paratroopers were last-minute additions.

Master Sgt. Edwin Rodriguez, a paratrooper from Stuttgart, jumped for the 78th time in his 20-year Army career. He wasn’t nervous at the outset.

“Once the door opens, yes, I feel it,” he said while standing near the plane before it took off.

Paratroopers exited one by one from side doors and floated to the ground in a long line of green chutes. Nine C-130J Super Hercules transport planes roll along the runway at Ramstein Air Base, Germany, on May 25, 2022, before taking off on a large-formation mission to mark the 37th Airlift Squadron’s 80th anniversary. (Michael Abrams/Stars and Stripes) Several C-130J Super Hercules can be seen trailing in the distance from the open ramp of another C-130J on May 25, 2022, near Ramstein Air Base, Germany. Nine C-130Js with the 37th Airlift Squadron at Ramstein flew a training formation to mark the squadron’s 80th anniversary. (Jennifer Svan/Stars and Stripes) Capt Mandy Olguin, a C-130J pilot, talks about the mission she flew May 25, 2022, to mark the 80th anniversary of the Germany-based 37th Airlift Squadron. (Michael Abrams/Stars and Stripes) 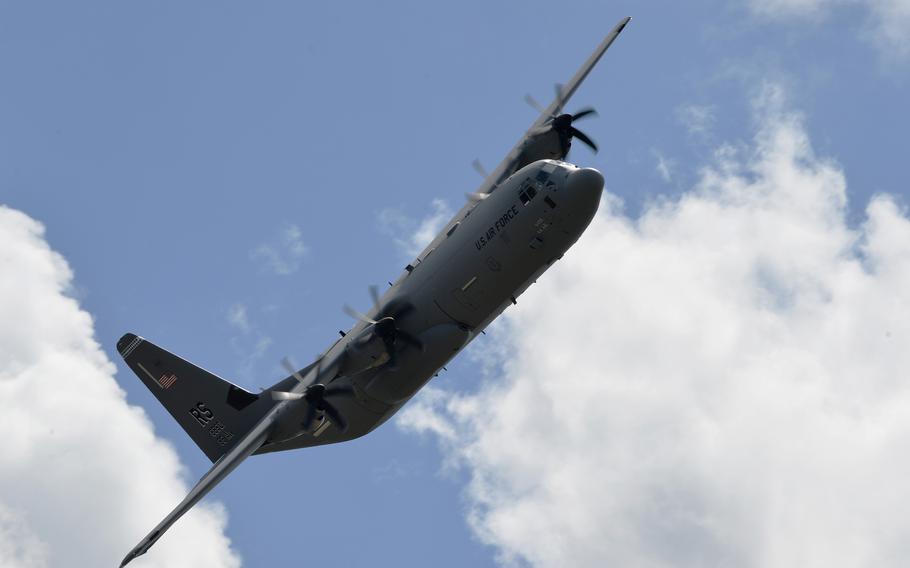 A C-130J Super Hercules of the 37th Airlift Squadron banks into a turn over Ramstein Air Base, Germany, flying in formation with eight other C-130s in an exercise that saw the rarity of paratroopers dropping in to the busy base. (Michael Abrams/Stars and Stripes)

Flying inside the belly of a participating C-130 felt like riding a roller coaster. Some passengers along for the ride to document the flight debarked with used motion sickness bags.

For the pilots, the flying was an adrenaline rush, Olguin said.

“I cannot stop smiling,” she said. “I’ve been here for three years. This has been by far the most worthwhile and rewarding flight I have flown here.”