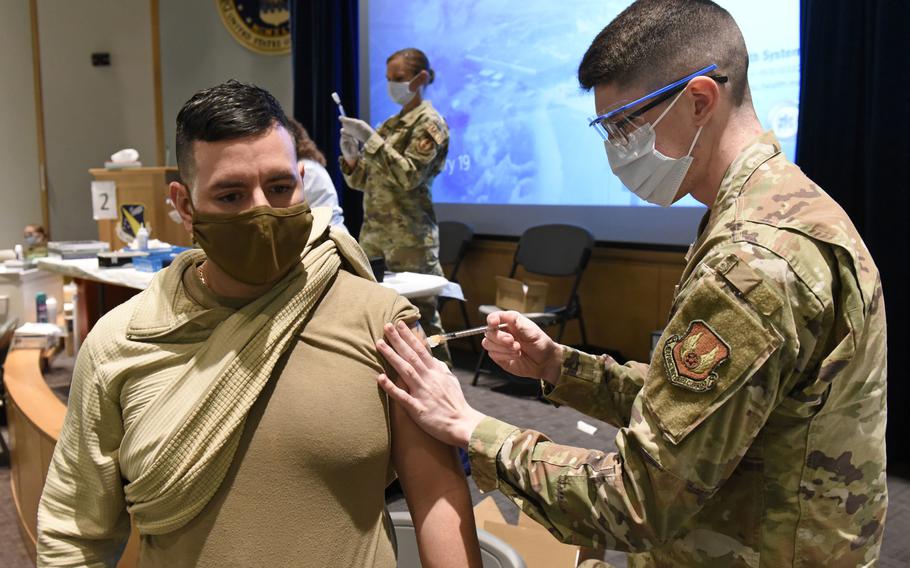 (Tribune News Service) — Dual federal lawsuits have been filed against the Air Force arguing that the service has unjustly denied requests for religious exemptions from the military’s COVID-19 vaccine mandate.

Both suits were filed in Cincinnati’s federal court, with the more recent action naming at least 18 plaintiffs, of whom 10 officers and one enlisted Airman are said to serve, or recently have served, at Wright-Patterson Air Force Base.

In a separate but related case, a second lieutenant serving at Wright-Patterson is suing Air Force leaders over what he said was the “perfunctory” denial of a request for a religious exemption.

That suit was filed last month by a second lieutenant serving at the 455th Operational Support Squadron at Wright-Patterson. It seeks a preliminary injunction against the Air Force from taking “punitive action” against him.

“On a perfunctory basis, the request for the religious exemption was denied, citing force protection requirements; in fact, the Air Force has failed to approve a single religious accommodation request,” 2nd Lt. Michael Poffenbarger’s attorney wrote in the initial January filing. “While at the same time, it has approved thousands of administrative or medical exemptions to the same requirements.”

Earlier this month, the Air Force said it approved the first religious exemptions from the COVID-19 vaccine mandate, with eight exemptions approved, along with one appeal that had sought an exemption.

More plaintiffs may be named. In Poffenbarger’s suit, Wiest filed on behalf of Poffenbarger and those “similarly situated.”

In January, Judge Thomas Rose denied the plaintiff’s request for an emergency temporary restraining order. A motion to reconsider that decision was also denied.

In a response filing, Air Force attorneys said Poffenbarger’s motions for restraining orders should be denied for multiple reasons.

“The Air Force’s interest in protecting the health of its service members to carry out its mission is indisputably compelling, and there is no basis for the court to conclude that plaintiff’s proposed less restrictive alternatives ... would protect the military’s compelling interests as effectively as immunization,” the service said.

A spokeswoman for the Air Force Tuesday said it is the Department of the Air Force’s policy not to comment on litigation.

Defendants listed in Poffenbarger’s suit include Air Force Secretary Frank Kendall, Lt. Gen. Robert Miller, Air Force surgeon general; and Col. Raymond Smith, commander of the 445th Airlift Wing, which is based at Wright Patterson. In all, seven defendants are named in that action.

Earlier this month, that case was reassigned to Magistrate Judge Caroline Gentry, who serves in Dayton’s federal court.

A federal judge in Georgia temporarily blocked the Air Force from punishing an officer who filed a lawsuit in January after she was denied a religion-based exemption from the vaccine mandate, Stars and Stripes newspaper reported last week. The unnamed officer is based at Robins Air Force Base, Ga., the newspaper said.

The Air Force has said that those who refuse to obey the order to be vaccinated will face disciplinary actions, including discharge from the service without involuntary separation pay.