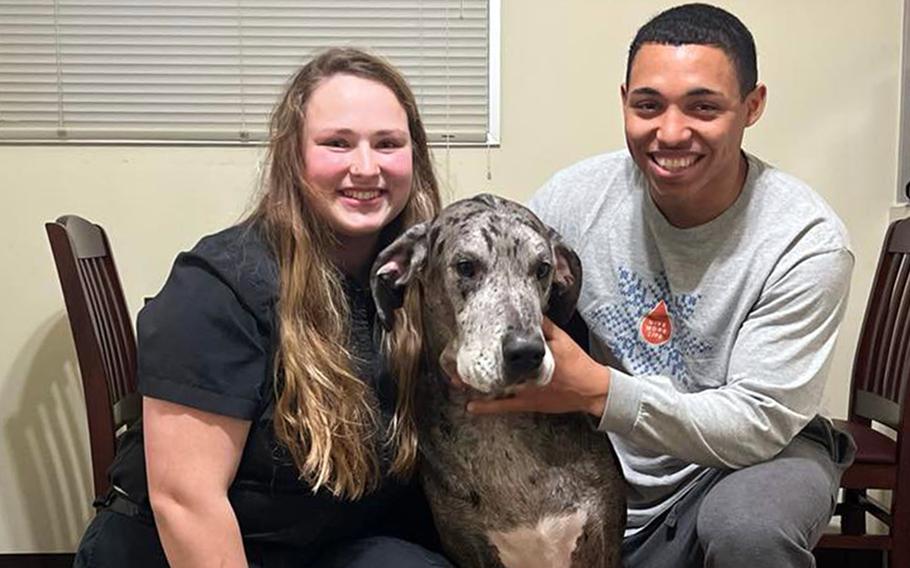 Senior Airman Avaunte Frizzell and his spouse, Josie Hayward, pose with their Great Dane, Henry, inside their apartment at Yokota Air Base, Japan, Monday, Jan. 31, 2022. (Kelly Agee/Stars and Stripes)

YOKOTA AIR BASE, Japan — Hundreds of people donated over the weekend to help an Air Force couple fly their Great Dane, Henry, back to the United States from Japan after reading an article by Stars and Stripes on Friday.

Senior Airman Avaunte Frizzell, 22, and his spouse, Josie Hayward, 21, were so overwhelmed they had to turn away eager donors after the fundraising campaign exceeded its $10,000 goal by $4,131, Frizzell told Stars and Stripes at the couple’s home at Yokota.

The couple, natives of Lake George, Mich., started a GoFundMe campaign Jan. 15 to raise $10,000 toward the $15,000 they need to ship Henry to their next duty station — Cannon Air Force Base in Clovis, N.M. — later this month.

Henry had rocketed to minor social media celebrity status when one conspicuous donor took his story to a higher plane.

Greta Van Susteren, a lawyer and journalist well known from her stints as program anchor on CNN, Fox News and MSNBC, tweeted Henry’s story to her 1.1 million followers. A dog lover herself, Van Susteren posted links to the article and the GoFundMe page on Sunday.

Hayward and Frizzell easily reached their $10,000 goal by Sunday.

“Right after the article went public, we immediately started getting messages and donations,” Frizzell said Monday.

Donations came in $10 and $20 increments, but some gave more substantial amounts. A woman coming to the air base on a permanent change of station gave three figures.

“There is a lady coming to Yokota, she is PCSing with two dogs, and she actually donated $300,” Hayward said. “She said that she would hope someone would help her out if she was in this situation.”

People worldwide donated to their cause, Frizzell said.

“The Yokota community, the Air Force community, the military community in general, retirees and even people at our new base we are going to were donating,” he said. “We received messages from our future command asking ‘Hey, how can we help get you guys here?’”

Van Susteren donated $100, and in an email to Stars and Stripes on Monday explained why she shared the article on Twitter.

“A dog is a family member and a great companion,” she said. “When you come home, even if you are late, the dog is happy to see you and wagging a tail. A dog does not say, ‘you are late’ but rather with that tail and excitement ‘I am thrilled to see you.’ Don’t we want our members of the military to have the opportunity to be loved by a pet and loved back? I also love crowd sharing — it gives us all an opportunity to help.”

Even after the couple reached their goal, people still wanted to donate, Hayward said.

“When I cut off the donations so we couldn’t receive any more, people were messaging me saying, ‘We still want to donate, can you give us the link?’ and I said, ‘Sorry, we are currently not doing donations anymore, but we appreciate the support,’” Hayward said. “I am still getting emails from people saying, ‘God bless you; I hope your family makes it.’”

Henry, who weighs 145 pounds, with his 50-pound cage exceeds the Air Force weight limit for pets on the Patriot Express, the government-contracted air service between the U.S. and its overseas military bases. The Military Airlift Command does not waive the weight limit.

Hayward and Frizzell turned to GoFundMe as a last resort to raise the $15,000 to fly Henry home via a commercial pet-moving service. They plan on purchasing Henry’s ticket by Saturday. He will stay with a neighbor in Japan until Feb. 22 when they head to the U.S. on Feb. 19.

The couple are still shocked by the response to their request.

“It is great to not have to worry about Henry because we have a lot of other things going on right now that are very stressful,” Hayward said. “We are trying to process out and do all the inspections and turn everything in, and that was an added stressor for us.”

Frizzell said they intend to pay forward their good fortune by helping others who find themselves in a similar situation.

“I honestly thought it was going to stop and it just kept going,” Frizzell said. “So, we were like, ‘How do you turn it off?’ because everyone was being so generous about it. We really appreciate it but we’re not going to take anything more than we need. We just wanted anything that could help, but, sure enough, it blew up. It was just insane.”