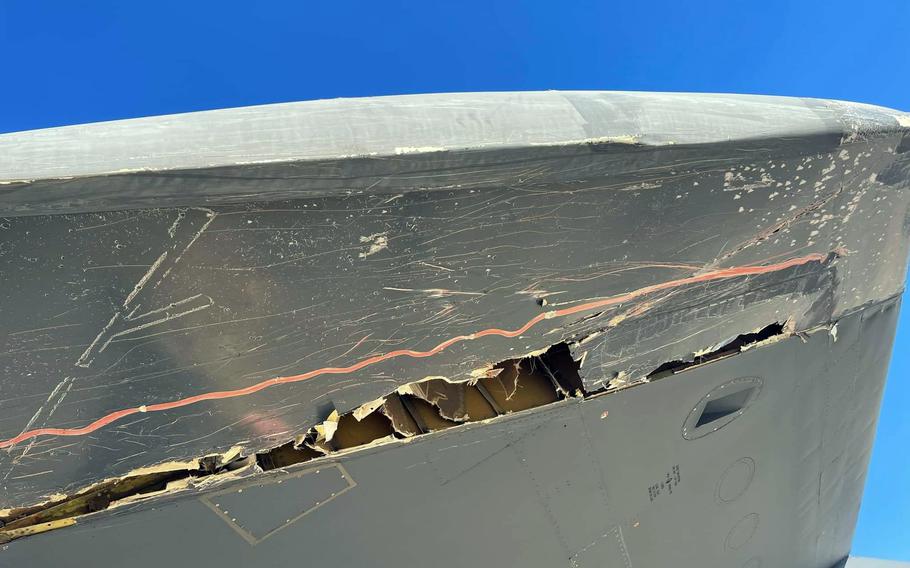 The Air Force is investigating damage to the wing of this B-52 bomber sustained on Nov. 12, 2021, while it was being towed at Barksdale Air Force Base, La. (Facebook)

The Air Force is investigating wing damage to a B-52 sustained Friday while the bomber was being towed at Barksdale Air Force Base, La.

A spokeswoman for the 2nd Bomb Wing at Barksdale offered Stars and Stripes a brief statement Tuesday, declining to provide any further details.

“A B-52 ground incident happened at Barksdale Air Force Base,” 2nd Lt. Aileen Lauer said in a phone interview. “The matter is under review by safety officials.”

The Stratofortress apparently collided with a chain-link fence as it was being towed, according to a redacted maintenance notification worksheet that was also published on the Facebook page.

"While positioning the aircraft for static display on the site, the aircraft collided with the fence directly in front of the [maintenance] building,” states the worksheet by the 2nd Aircraft Maintenance Squadron.

“No personnel were reported injured,” the worksheet states. “All pieces were recovered from the fence and the aircraft and there is significant damage to the right wing tip and the leading edge wing outboard of the right external tank.” A photo on the Facebook page shows a large gash to the skin on the underside of the Superfortress’ wing. Another photo shows a fence with several steel posts bent over.