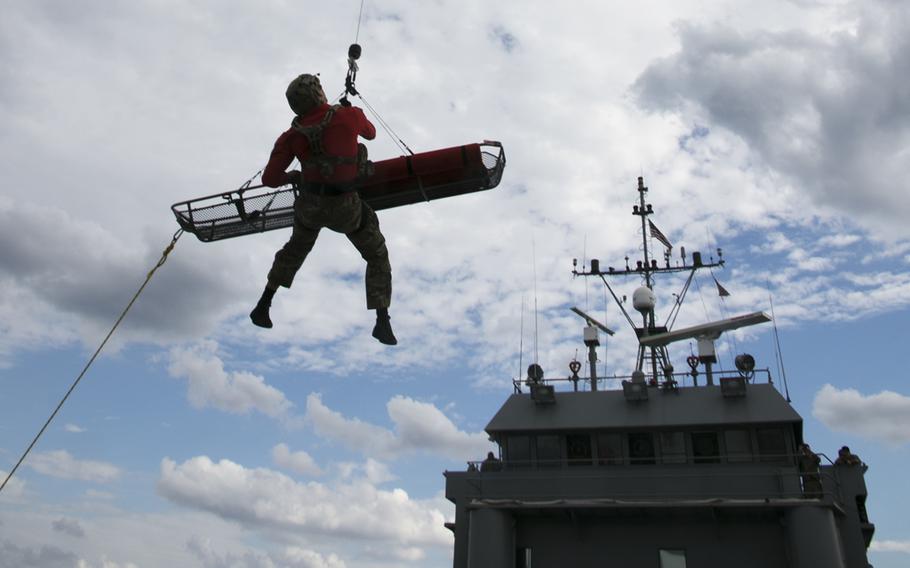 Buy Photo
An Air Force pararescue specialist and a simulated casualty are lifted by a Pave Hawk helicopter from an Army landing craft off Okinawa, Japan, on Nov. 10, 2021. (Matthew M. Burke/Stars and Stripes)

Air Force HH-60G Pave Hawk helicopters from the 33rd Rescue Squadron descended upon the USAV Calaboza and USAV Fort McHenry well into Wednesday evening, lowering and raising pararescue jumpers, or PJs, to and from the slick, salt-sprayed decks.

The training was designed to streamline communications between the sister services and introduce the Runnymede-class large landing craft to airmen as the Army carves out a larger role for itself in the Indo-Pacific region.

“We have a medic, but we’re not equipped to do prolonged treatment of an emergency,” Chief Warrant Officer 2 Sean Meenan, captain of the Fort McHenry, told Stars and Stripes during a lull in the exercise. “This allows us to rehearse, prepare our vessel and our crew to be in a better position to relay the state of emergency and get the patient off our vessel.” 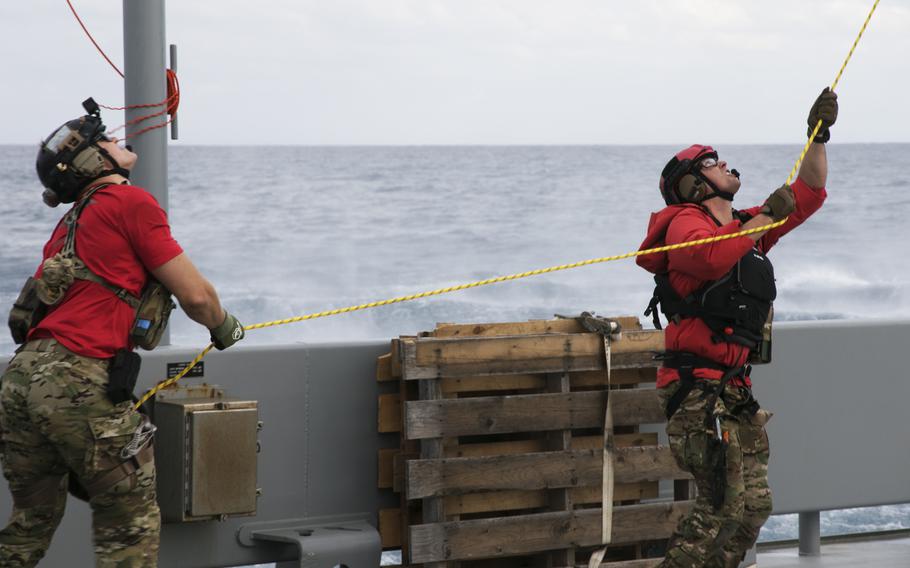 The landing craft cast off from the pier at White Beach Naval Facility just after noon. About an hour later a simulated distress call was sent to the Joint Reception Coordination Center. Within 15 minutes two Pave Hawks had reached the landing craft, which were situated just shy of one nautical mile apart.

“One of the challenges is going to be the communications between us and the helicopter, making sure we’re on the same heading as well as the speed,” Meenan said.

The landing craft — with masts on the bow and stern — has to be positioned properly to accept the PJs. The sea state is also a factor, Meenan said.

The 33rd Rescue Squadron worked through its checklist, lowering a single PJ, then a pair at the same time, then one carrying the casualty collection basket, then hoisting them all back into the Pave Hawk.

Air Force Master Sgt. Uwemediimo Essien watched the helicopter blades and the masts and made sure the lowered PJs didn’t get tangled up. “This was the first time seeing that and they had to adjust on the fly,” Miller said.

Meenan said he was amazed at how the downwash moved his vessel. He had to rev engines almost full tilt to keep the vessel on course.

“When the bird came over the ship, it just wanted to continuously turn the vessel to starboard,” said McHenry first mate Staff Sgt. Spencer Grimes. “Myself and the skipper were doing a very good job of keeping it on the same heading and maintaining a speed of 4 or 5 knots.”

The Pave Hawks returned to Kadena to onload a new crew for its turn. They practiced into the night using night vision goggles.

Miller called the army sailors “phenomenal” to work with.

“Working with the Army is a big success for us,” Miller said.