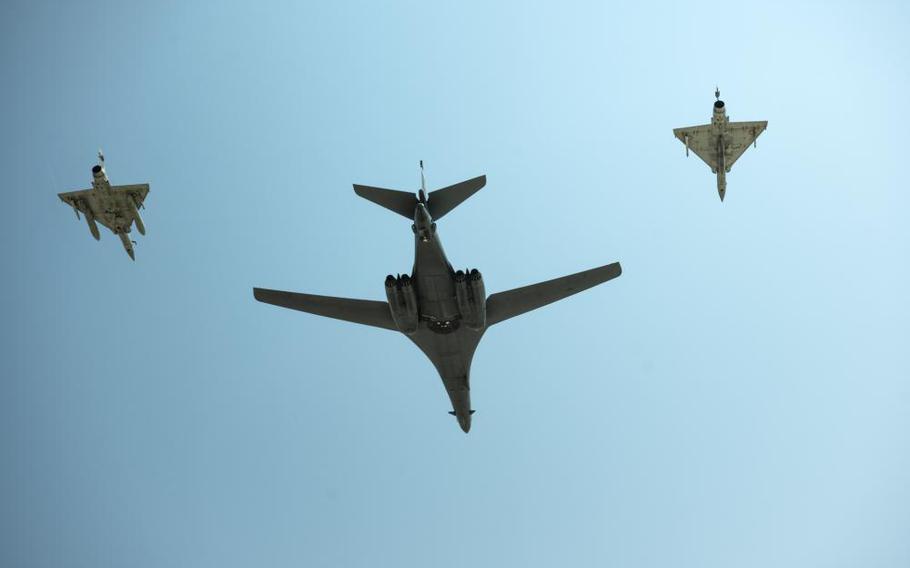 A pair of Air Force B-1 Lancers, flanked by six fighter jets, made a low pass over the only permanent U.S. military base in Africa on Thursday, in what officials said was a symbol of allied commitment to the region.

The low approach coincided with an Allied Appreciation Day celebration on base, AFRICOM said in a statement. About 200 guests and senior leaders from Djibouti, the United States, France, Britain, Spain, Japan and Italy gathered to mark Veterans Day, which is celebrated as Armistice Day and Remembrance Day in other countries.

“Today’s bomber task force mission served as a visual representation of the international participants’ collective commitment to stability and security in the Horn of Africa,” said Maj. Gen. Gregory Anderson, AFRICOM director of operations. “It further demonstrates Djibouti as a leading security partner in the region.”

The U.S. sees the tiny country in East Africa as a model ally in a region where Washington is competing for influence with Beijing and Moscow. Small U.S. investments on the continent now could pay big dividends later, U.S. officials say.

“Our future security, prosperity and ability to project power globally rest on free, open and secure access in and around Africa,” Gen. Stephen Townsend, head of U.S. Africa Command, told Congress in April.

The American F-35s were from among 10 from Marine Corps Fighter Attack Squadron 211, which deployed in May with the British carrier strike group and the Royal Air Force 617 Squadron — the first time U.S. F-35s have been embarked on a foreign country’s carrier.

Thursday’s overflight event highlighted some of the United States’ oldest alliances, symbolizing “mutual involvement for peace in Horn of Africa, as in other parts of Africa, particularly the Sahel,” said Air Division Gen. Stephane Dupont, commander of French Forces in Djibouti, which was a colony and overseas territory of France until 1967.