DJIBOUTI — Nathan Reynolds’ passion for replacing U.S. military veterans’ broken or missing headstones took him to a little-known graveyard for foreigners in the Horn of Africa.

Without Reynolds, a 40-year-old Army veteran deployed to Camp Lemonnier with the Defense Logistics Agency, World War II veteran Arthur R. Lewis would likely still be buried in an unmarked grave covered in broken bits of coral at the New European Cemetery in Djibouti city.

“This is definitely the hardest one I’ve ever done,” Reynolds, an Ohio native, said of his work to help the Lewis family get a Department of Veterans Affairs headstone placed at Lewis’ grave.

Lewis, a Massachusetts native, had served as a radioman in the Coast Guard in the 1920s, then on a Liberty ship for several years with the Merchant Marine during WWII. 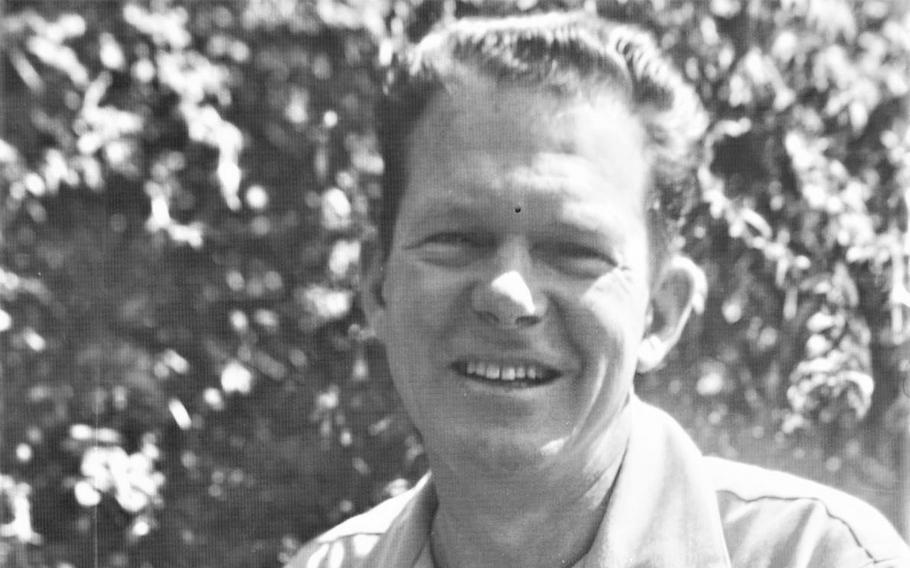 An undated photo of Arthur Lewis in August 1947. Lewis, a Coast Guard and WWII Merchant Marine veteran, died aboard the S.S. Steel Vendor in 1959 off the Horn of Africa. U.S. military officials rededicated his gravesite in Djibouti with a new headstone, Oct. 28, 2021. (Lewis family) 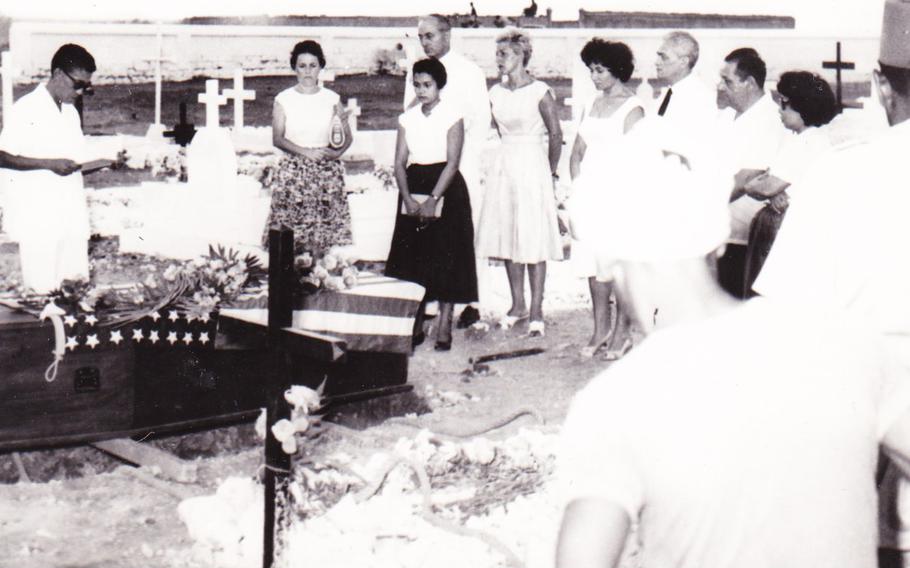 He was working aboard the S.S. Steel Vendor, a former troop transport that had become a cargo ship after the war, when he died at sea in 1959 while transiting from a Red Sea port to Djibouti city. At the time, Djibouti was still known as French Somaliland.

The humble gravestone was all the family expected, said Chaplain James Parnell, an Army major who helped Reynolds. But the deployed Americans didn’t stop there.

“We were like, ‘We gotta do more than that,’” said Maj. Jay Cavaiola, of the 404th Civil Affairs Battalion, who joined the effort in June. Soldiers assigned to Combined Joint Task Force-Horn of Africa display the American flag at the grave of World War II veteran Arthur Lewis during a burial honors ceremony at the New European Cemetery in Djibouti City, Djibouti, Oct. 28, 2021. Service members cleaned the cemetery and installed a new headstone in honor of Lewis, who died in 1959 while at sea. (Dwane R. Young/U.S. Air Force) 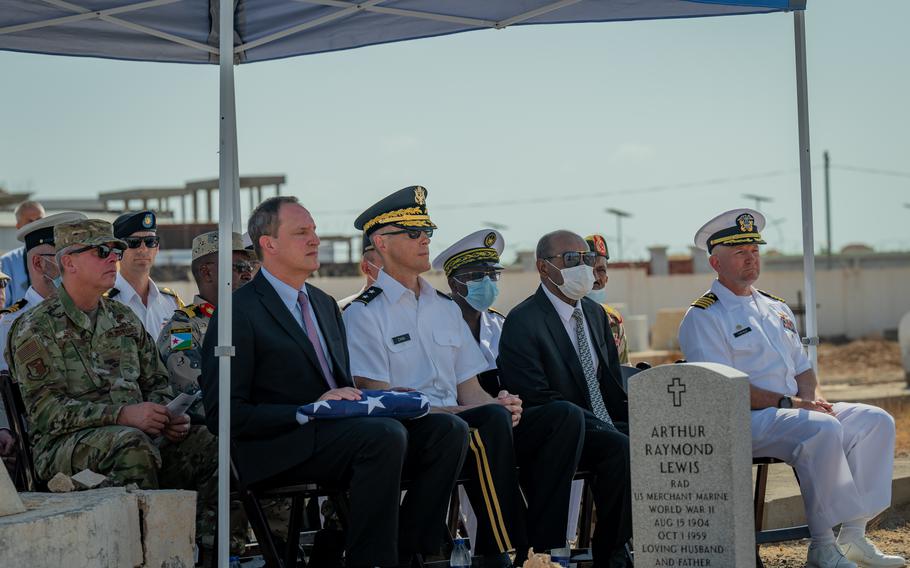 On Thursday, American and foreign dignitaries and service members from several countries gathered in the baking sun to render Lewis his long-overdue military honors.

Presiding over the event were the U.S. ambassador, the two-star Army commander of the U.S.-led military task force in the region and the Navy captain who oversees nearby Camp Lemonnier, the only permanent U.S. base on the continent.

Guests included the Djiboutian defense minister and senior military officers of that country as well as counterparts from France and Canada.

Lewis’ family, who regretted they could not attend the ceremony, were “blown away” by the honor shown their father, Parnell said.

It was an opportunity to recognize not only Lewis’ life and wartime service but also the long-standing partnerships between the U.S., its Djiboutian hosts and their allies, said Maj. Gen. William Zana, commander of the combined joint task force. French, British, Australian and Canadian service members are also interred at the cemetery.

Reynolds called it fortuitous that he was among the 5,000 troops, civilians and contractors deployed last year to Camp Lemonnier, a few miles from where Lewis was laid to rest. 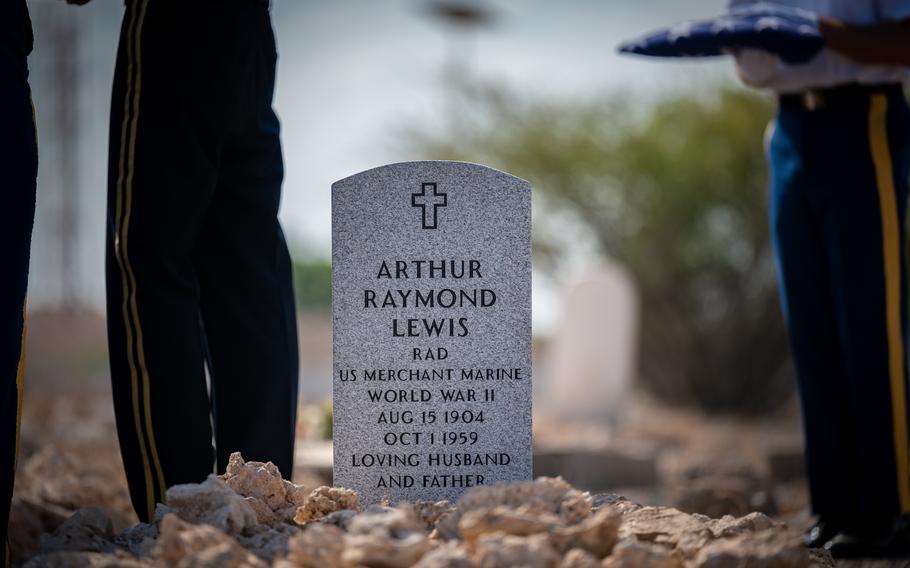 A frequent contributor to the website Findagrave.com, Reynolds gets notifications via the website’s app of requests for gravesite photos.

That’s how he learned that Lewis’ daughter, a Washington state resident, was seeking a photo of her father’s grave.

She’d uploaded a black-and-white photo of a flag-draped casket taken before it was lowered into the grave. But despite scouring the cemetery, Reynolds could not find the burial plot.

He offered to send Lewis’ daughter information on how to ask the U.S. Embassy to place a marker. She told him she’d been trying since 2011 to get U.S. officials to help her do just that, but kept running into roadblocks, Reynolds told Stars and Stripes this week.

Staff Sgt. Rolland Cheng of the 443rd Civil Affairs Battalion offered to help find the grave and get it marked.

He and Reynolds eventually recruited Army chaplains and a French liaison officer.

They handed off the project to other civil affairs soldiers when they rotated back to the U.S. last spring.

The biggest challenge was driving around town and knocking on doors looking for the right people to help them, said Cavaiola, the major from the 404th Civil Affairs Battalion. Americans met with the city’s mayor, the national coroner-mortician and a local bishop. 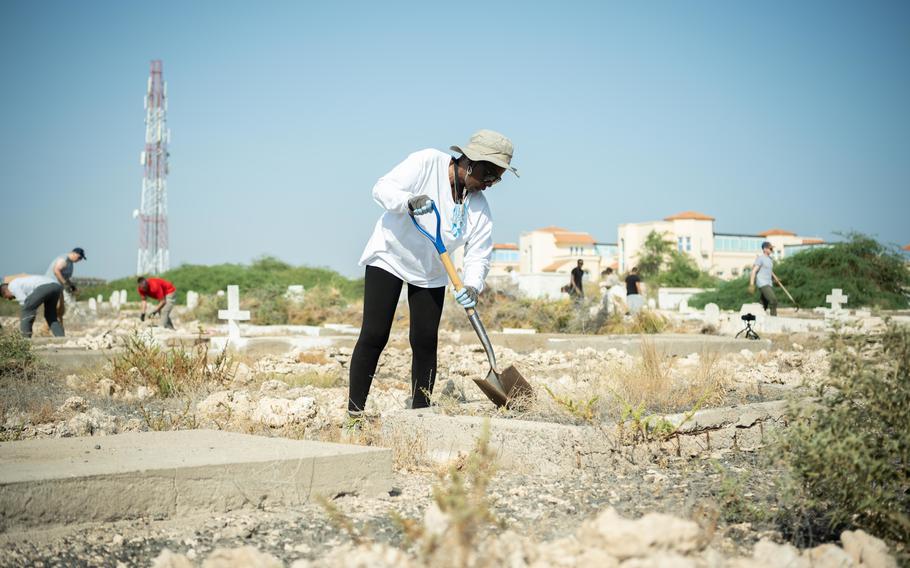 U.S. service members with the Combined Joint Task ForceHorn of Africa clean weeds and debris at the New European Cemetery in Djibouti city, Djibouti, Oct. 11, 2021. The cemetery is the final resting place for World War II veteran Arthur Lewis, who died in 1959 while at sea aboard the vessel S.S. Steel Vendor. (Andrew Kobialka/U.S. Air Force)

After locating the burial plot, they helped the family purchase it in perpetuity, which is uncommon in Djibouti, Cavaiola said. Back in Ohio, Reynolds filed the request with Veterans Affairs for the stone, approved by the family.

“The VA was a little confused,” Reynolds said. “I don’t think they get many requests for places like that.”

Parnell, the chaplain, said it hadn’t been “anybody’s mission” but rather something they did out of a sense of duty.

One last thing remained after Thursday’s ceremony: flying the neatly folded U.S. flag and other mementos back to the U.S. for handover to the Lewis family.