This Friday, Aug. 10, 2007, file photo, shows the logo of the Department of the Air Force at the United States embassy in Berlin. (Michael Sohn/AP )

The Air Force wants to create a one-stop shop for abuse victims after a survey administered last year found more than half of respondents had experienced psychological or physical abuse during the prior two years, but few reported it, service officials said Tuesday.

Self-identified abuse victims lacked confidence that reporting harmful incidents would accomplish anything, and those who sought help were largely dissatisfied with their experiences, according to an Air Force report released Tuesday.

Top service officials involved in administering the survey, which was the basis for the report entitled Interpersonal Violence in the Department of the Air Force, said the Air Force needed to do more to bridge a gap between victims and their commanders, who generally believe abuse victims receive proper care, the report found.

“It seems to be uniformly true that people at the lower levels who have experienced these things are telling us that there's a problem, and the senior leadership is not perceiving that there is that problem,” Air Force Secretary Frank Kendall told reporters in a news briefing to discuss the report’s findings. “So, we've got an issue right there.” 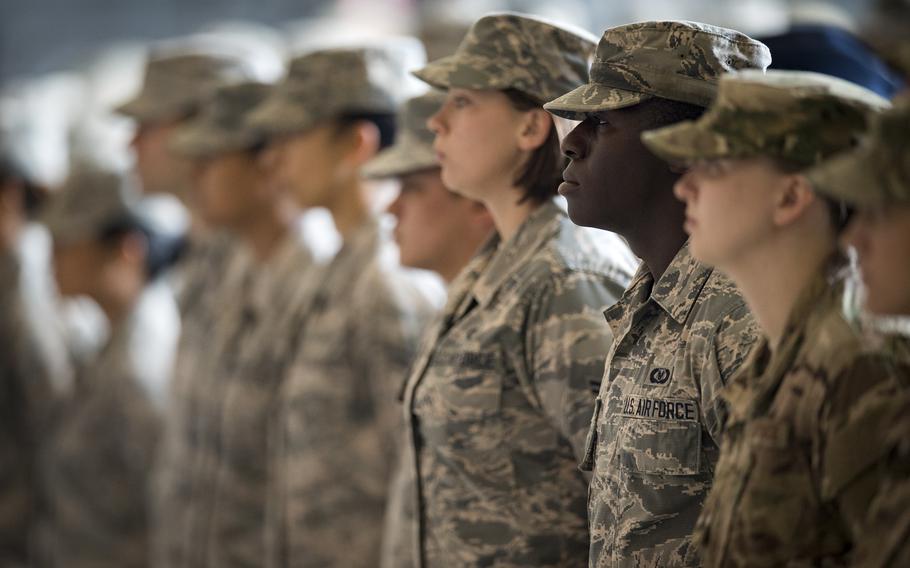 The survey was sent out in 2020 by the Air Force Interpersonal Violence Task Force, which was set up by service leaders during the summer in the wake of the Army’s troubling findings of wide-spread abuse and harassment at Fort Hood, Texas.

The task force, led by Air Force Brig. Gen. April Vogel, issued the survey to the Air Force Department’s about 654,000 airmen, Space Force guardians and civilian employees. The task force conducted more detailed follow-up surveys and focus groups to understand victims of interpersonal violence, which it defined as 81 behaviors in which abusers use “power or force resulting in psychological or physical harm or that detracts from a culture of dignity and respect.” They described such abuses as ranging from “stalking and bullying to domestic violence and sexual assault.”

About 54% of the 68,000 Air Force Department personnel who responded to the survey reported they had experienced such abuse during the previous two years. This includes airmen, Space Force guardians and Air Force civilian employees. The report also found more than half of the respondents in each component of the department — the active-duty Air Force, the Space Force, the Air National Guard, the Air Force Reserves and the civilian employees — reported facing such abuse.

Workplace bullying, reported by about 36% of survey respondents, was the most common abuse reported. About 29% reported workplace harassment. Some 9% reported intimate partner violence, and another 21% reported violence from others.

Less than 40% of victims reported their abuse to commanders or law enforcement authorities, according to the report. Most who did not report the abuse said they did not believe anything would happen if they did report it or they were concerned they would face negative consequences for reporting, the Air Force found. Those who did report the abuse or sought help found mixed results in the services offered to victims by the Air Force.

Vogel said many victims reported they were discouraged after struggling to find the right location to receive help or report abuse. She said the Air Force should work to build a single location within the service for abuse victims to seek help or report an incident.

“The hope is that if our airmen and guardians knew that they had one place to go, where they would get help or support for whatever challenge they were facing … [where] they wouldn't be turned away and told to go to a different location, that they might be more likely to come forward and ultimately get … the help they need,” Vogel said.

She said the report was a starting point for the Air Force to improve its response to victims of abuse, and she said further analysis and data collection would be needed to draw more conclusions.

The data collected via the survey might not be a true representation of the prevalence of such abuse in the force, Kendall said. He said he believes the roughly 10% of Air Force Department personnel who did respond are “more likely to have experienced some form” of abuse than those who did not.

Nonetheless, the Air Force secretary said he took the issue seriously and was not attempting to downplay the survey’s findings.

“Even if this is all there is [within the department] it’s way too many,” Kendall said. “This is a great many people who have experienced some form of interpersonal violence in this department. It does not tell you what the total numbers are, but the numbers are big enough that you have to take this incredibly seriously, and I am.”